Two Hindu swamis were in conversation.

One said to the other, "How did you like my latest book, 'The Art of Levitation'?"

His companion replied, "It kept me up all night."


***
A Hindu devotee asked God, represented by the multi-armed Lord Narayana, this question. "My dear Lord," he said. "I understand that you have innumerable inconceivable potencies. But out of all of them the energy of light seems to be the most amazing. Light pervades the spiritual world, it illuminates the material universes, and life is impossible without it." He continued, "I would like to know how you make it work."

Guy: "So what do you do for a living?"
Gal: "Female impersonator."

Guy: "How do you like your eggs in the morning?"
Gal: "Unfertilized, go away!"

A graying man in his 60's approaches a twenty-something with "Where have you been all my life?" She took one glance at him and said, "For the first half of it, I probably wasn't born yet."

Two young dudes are striding down the street and one glances at a girl who has just walked by. She turns around and sneers at him, "What are you looking at?" His friend comes to the rescue: "He thought you were good looking. Man, was he was mistaken!"

Gal:"Sorry, I don't date outside my species."

The children were lined up in the cafeteria of a Catholic elementary school for lunch. At the head of the table was a large pile of apples.

The nun made a note, and posted on the apple tray: "Take only ONE. God is watching."

Moving further along the lunch line, at the other end of the table was a large pile of chocolate chip cookies. A child had written a note,

"Take all you want. God is watching the apples."
#joke

After reading the morning headlines about the recent stock market downturn, a high-powered executive trying to impress a client in his office, flipped on his intercom switch and barked to his secretary, "Miss Hunter, get my broker!"

The client was impressed until he heard the secretary's clear voice saying, "Yes, Sir, stock or pawn?"

A MAN was out walking in the country when he saw a little girl struggling to drive a cow along the road.
He asked her what she was doing and she said: "I've got to take this cow to the bull."

"Couldn't your father do that?" asked the man.

The little girl replied: "Oh no, it has to be the bull."

An elderly man was reminiscing to his young granddaughter about his wartime experiences.

He said: "I fought in Africa, in Italy and in Germany. I fought with Montgomery, with Wavell and with Alexander."

His granddaughter looked up at him and said: "Couldn't you get on with anybody, Grandpa?"

What's the difference between a teacher and a train?

A teacher says "Spit that gum out", but a train says "Chew chew".

What do you call a fairy who never takes a bath?

If you have a joke you would like to share with us, send it by e-mail to: letters_en@ edinburghnews.com 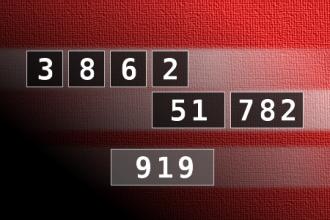 A small white guy goes i...

A small white guy goes into an elevator.

As soon as he steps in, he sees this huge black guy standing there. This guy was enormous. The biggest youÂ’ve ever seen.

Petrified at the size of the black guy, the small white guy momentarily freezes and the elevator doors close.

Now the elevator starts moving and the small guy, in amazement, canÂ’t stop staring at the black gay. The black guy looks down at the small white guy and says: "8 foot tall, 350 pounds, Turner Brown"

The small guyÂ’s face turns blue and he suddenly faints!

The black guy, totally surprised and concerned, picks up the small guy and gently brings him to by slapping his face and shaking him.

The small white guy replies, "Excuse me, but what did you say to me before I fainted?Â”

The small guy says, "Thank god, I thought you said 'Turn around.'

Did you hear about the terrori...

Did you hear about the terrorist who hijacked a courtroom full of lawyers? He threatened to release one every hour until his demands were met.
#joke #short #lawyer
Joke | Source: Click The City - Philippine's Leading Lifestyle and Entertainment Guide.

What did the skeleton say to his girlfriend?

I love every bone in your body!

Why did the small werewolf bite the womans ankle?

Because he couldn't reach any higher!

What happened when the werewolf chewed a bone for an hour?

When he got up he only had three legs!

What did one witch say to another when they left the cinema?

Do you want to walk home or shall we take the broom!

What makes more noise than an angry witch?

They have no organs!

Why wasn't the naughty skeleton afraid of the police?

Because he knew they couldn't pin anything on him!

On the seventh day, God said, "Let there be football."

And it was good.

Later that day, God said, "Let there be one team to rule the others and set the standard for excellence."

With that, he plucked a star from the heavens and placed it on the helmet of silver and blue.

So he made their fans.

How do hillbillies celebrate Halloween?

A Sunday school teacher was giving her class the assignment for the next week.

“Next Sunday,” she said, “we are going to talk about liars, and in preparation for our lesson I want you all to read the Seventeenth Chapter of Mark.”

The following week, at the beginning of the class meeting, the teacher said, “Now then, all of you who have prepared for the lesson by reading the Seventeenth Chapter of Mark, please step to the front of the room.”

About half the class rose and came forward.

“The rest of you may leave,” said the teacher. “These students are the ones I want to talk to. There is no
Seventeenth Chapter in the Book of Mark.”