Sitting round a small coffee table in a room of an international insurance company, a group of 4 people waited for a job interview. There was an Englishman, a Frenchman, a spectacular looking blonde and an awful looking fat lady.

After 15 minutes in complete silence, and avoiding each other's eye contact, there was a power cut. The unmistakable sound of a slap was heard. Two minutes later the power came on again and the Frenchman had a big red slap mark on his cheek.

The fat lady thought - "This dirty old Frenchman laid his hands on the blonde and she smacked him".

The Frenchman thought - "That damned Englishman put his hand on that blonde and by mistake she slapped me".

The Englishman thought - "I hope there's another power cut soon so I can smack that French twat again".


Q. Have you heard of the dyslexic cow who attained enlightenment?

A. It kept on repeating OOOOMMM!

A lonely frog, desperate for any form of company telephoned the Psychic Hotline to find out what his future has in store.

His Personal Psychic Advisor advises him, “You are going to meet a beautiful young girl who will want to know everything about you.”

"Here's your tax dollars at work. We are supposed to be conserving energy. The navy is now being asked to pay the electric bill for Vice President Dick Cheney's house in Washington, the Naval Observatory. They are asking us, the taxpayers, to pay the bill. You now how much it is? It is $186,000 a year! How many times are they shocking him back to life? There are two people that live in the house! What, are he and Bush electrocuting guys in the basement now?" -- Jay Leno

A young couple drove several miles down a country road, not saying a word. An earlier discussion had led to an argument, and neither wanted to concede their position.

As they passed a barnyard of mules and pigs, the husband sarcastically asked, "Are they relatives of yours?" 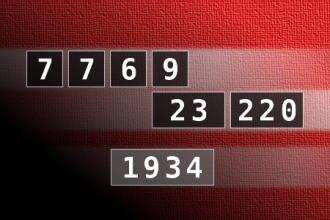 A blonde, wanting to earn some money, decided to hire herself out as a 'handy-woman' and started canvassing a nearby well-to-do neighborhood.

She went to the front door of the first house, and asked the owner if he had any odd jobs for her to do. "Well, you can paint my porch," he said, "how much will you charge me?" The blonde, after looking about, responded, "How about $50?"

The man agreed and told her that the paint and other materials that she might need were in the garage.

The man's wife, inside the house, heard the conversation and said to her husband, "Does she realise that the porch goes all the way around the house?"

The man replied, "She should; she was standing on it. Do you think she's dumb?"

"No", replied the wife. "I guess I'm guilty of being influenced by all the 'dumb blonde' joke emails we've been receiving."

A short time later, the blonde came to the door to collect her money.

"You're finished already?" the husband asked.

"Yes," the blonde replied, "and I had paint left over, so I gave it two coats."

Impressed, the man reached into his pocket for the $50.00 and handed it to her.

How do you define "selfish"? That's what the owner of a seafood store does.
#joke #short
Joke | Source: Click The City - Philippine's Leading Lifestyle and Entertainment Guide.


Saddam Hussein's stockpile is deadly. The smoke from his biological weapons could mix with sulfur from his chemical weapons and create an atmospheric condition known as Los Angeles.

The Los Angeles Board of Education has OK'd a plan to equip school police cars with guns. The plan works on a tier system: Police at elementary schools will carry supersoakers, junior high patrols will carry paint guns, and shotguns will be used at high schools.

AT&T announced last week it will lay off up to 8,000 employees. Ever conscious of its image, the company is promoting the layoffs as a new feature called job forwarding.

El Nino storms are affecting trade with Asian countries. A freighter bound for Long Beach Calif. with a cargo of yo-yos got caught in a particularly violent storm. It sank 65 times.

Charloote Hornets star Anthony Mason faces charges of statutory rape of two girls, ages 14 and 15. His attorney will use the Kennedy defense, which states that together they were 29.

Marcia Clark has signed with NBC to become a legal affairs commentator. In the job, she'll discuss ongoing court cases and then describe what she would do to lose them.

The inventor of the airplane borarding ramp has died at age 85. Funeral seating will begin half an hour before the service, with preferential treatment for immediate family members, followed by friends and relatives holding passes numbered 1 through 30.

Magic Johnson signed a deal with Starbucks to open new coffee shops in inner city neighborhoods. Just what the poor needed - a good $3 cup of coffee.

Michael Jackson's business partner has bought part of TWA, and now says he's going to have Michael redesign some of the planes. Michael says he wants the planes to be all white with smaller noses. (O'Brien)

A Canadian snowboarder got his gold medal back despite testing positive for marijuana. Olympic officials should have know better. Snowboarding was invented because a stoned snowboarder couldn't remember where he put his other ski.

More controversy in pairs skating when Boris and Natasha were awarded a gold medal by the Eastern Bloc countries, even though they were clearly beaten by Moose and Squirrel.

Did anyone see the luge? It's a 3 foot long little vehicle that has no room, has to be pushed to get started and only goes downhill. Here in America we call that a Hyundai. (Leno)

Newt Gingrich says that the major networks should give free air time to anti drug messages. For example, they should come on during your favorite show and talk about how drugs and alcohol are a dead end street... and now back to Nash Bridges starring Cheech Marin and Don Johnson. (Maher)

Scientists at Rutgers University have released a study identifying the three phases of love. They are: lust, attraction and subpoena.

Fortean Times reports that a British supermarket worker's underwear spontaneously combusted. Luckily it was edible underwear, so the clerk ended up with cherries jubilee.

And finally, with Bill Clinton in the White House, I finally understand why we celebrate Presidents Day with mattress sales. (Leno)

'You can't be a real country unless you have a beer and an airline. It helps if you have some kind of a football team or some nuclear weapons, but at the very least you need a beer.' - Frank Zappa.

'Always do sober what you said you'd do drunk. That will teach you to keep your mouth shut.' - Ernest Hemingway.

'Always remember that I have taken more out of alcohol than alcohol has taken out of me.' - Winston Churchill.

'He was a wise man who invented beer.' - Plato.

'Time is never wasted when you're wasted all the time.' - Catherine Zondonella.

'A woman drove me to drink and I didn't even have the decency to thank her.' - W. C. Fields.

'Sir, if you were my husband, I would poison your drink.' - Lady Astor to Winston Churchill.

'Madam, if you were my wife I would drink it.' - Churchill's reply.

'Yes madam, and you're ugly. But in the morning I will be sober.' - Churchill's reply.

'If God had intended us to drink beer, He would have given us stomachs.' - David Daye.

'When I read about the evils of drinking, I gave up reading.' - Henny Youngman.

'Beer is proof that God loves us and wants us to be happy.' - Benjamin Franklin.

'If you ever reach total enlightenment while drinking beer, I bet it makes beer shoot out your nose.' - Jack Handy.

'Without question, the greatest invention in the history of mankind is beer. Oh, I grant you that the wheel was also a fine invention, but the wheel does not go nearly as well with pizza.' - Dave Barry.

'The problem with the world is that everyone is a few drinks behind.' - Humphrey Bogart.

'Why is American beer served cold? So you can tell it from urine.' - David Moulton.

'People who drink light beer don't like the taste of beer, they just like to pee a lot.' - Capital Brewery, Middleton, Wisconsin.

'Give me a woman who loves beer and I will conquer the world.' - Kaiser Wilhelm.

'I would kill everyone in this room for a drop of sweet beer.' - Homer Simpson.

'Not all chemicals are bad. Without chemicals such as hydrogen and oxygen, for example, there would be no way to make water, a vital ingredient in beer.' - Unknown

'I drink to make other people interesting.' - George Jean Nathan.

'They who drink beer will think beer.' - Washington Irving.

'An intelligent man is sometimes forced to be drunk to spend time with his fools.' - Ernest Hemingway in For Whom the Bell Tolls.

'You're not drunk if you can lie on the floor without holding on.' - Dean Martin.

'All right, brain, I don't like you and you don't like me - so let's just do this and I'll get back to killing you with beer.' - Homer Simpson.

There's a senior citizen driving on the highway. His wife calls him on his cell phone and in a worried voice says, ''Herman, be careful! I just heard on the radio that there was a madman driving the wrong way on Route 280!''

Herman says, ''I know, but there isn't just one, there are hundreds!''