This baby is born and immediat...

This baby is born and immediately runs out of the delivery room and into the waiting room were all the expected fathers are. He walks up to the first guy and asks "Are you my daddy"?

Baby walks up to the next guy and asks "Are you my daddy"?

Baby walks up to the third guy and asks "Are you my daddy"?

The guy answers "Yes I am".

Baby says "Come here". As the guy bends forward towards the baby, the baby begins tapping him on the forehead with his index finger and asks "How do you like it".
#joke
Joke

Three women die together in an accident and go to heaven. When they get there, St. Peter says, "We only have one rule here in heaven: don't step on the ducks!"

So they enter heaven, and sure enough, there are ducks all over the place. It is almost impossible not to step on a duck, and although they try their best to avoid them, the first woman accidentally steps on one. Along comes St.. Peter with the ugliest man she ever saw. St. Peter chains them together and says, "Your punishment for stepping on a duck is to spend eternity chained to this ugly man!"

The next day, the second woman steps accidentally on a duck and along comes St. Peter, who doesn't miss a thing. With him is another extremely ugly man. He chains them together with the same admonishment as for the first woman.

The third woman has observed all this and, not wanting to be chained for all eternity to an ugly man, is very, VERY careful where she steps. She manages to go months without stepping on any ducks, but one day St. Peter comes up to her with the most handsome man she has ever laid eyes on .... very tall, long eyelashes, muscular, and thin. St. Peter chains them together without saying a word.

The happy woman says, "I wonder what I did to deserve being chained to you for all of eternity?" The guy says, "I don't know about you, but I stepped on a duck!"

What Not To Tell A Friend: You are such a good friend that if we were on a sinking ship and there was only one life jacket, I'd really, really miss you and think of you often.
#joke #short
Joke | Source: Click The City - Philippine's Leading Lifestyle and Entertainment Guide.

A pediatrician is trying to put a 6-year-old patient, Timmy, at ease. He asks, "If you found a few dollars on the street, what would you buy?" Without hesitation, Timmy says, "A box of Tampax." Surprised, the doctor asks why. "Well," Timmy says, "it says on TV that with Tampax, you can go swimming, horseback riding, and skating anytime you want to!"
#joke #doctor
Joke | Source: Joke of the Day - Jokes served hot and fresh daily.

What has a whole bunch of little balls and screws old ladies? 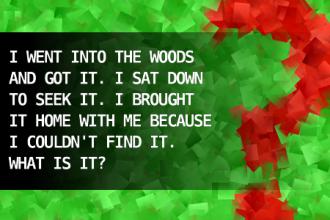 I went into the woods and got it. I sat down to seek it. I brought it home with me because I couldn't find it. What is it?
CHECK ANSWER
Brain Teasers, puzzles, riddles, mathematical problems, mastermind, cinemania...

#joke #thanksgiving
Joke | Source: Joke of the day - Jokes of the day on Wordpress

A Dell customer called to say he couldn't get his computer to fax anything. After 40 minutes of trouble-shooting, the technician discovered the man was trying to fax a piece of paper by holding it in front of the monitor screen and hitting the "send" key.
#joke #short
Joke | Old joke from joke of the day archives - Check out other old jokes Friday, 15 August 2008