Q: How did the blonde break her nose?

A man walks into the toy store to get a Barbie doll for his daughter. So he asks the assistant, as you would, "How much is Barbie?"
#joke #short
Joke | Source: jokes warehouse - Animal jokes, Blonde jokes, doctor jokes, drunk jokes and jokes of the day

Why did the first monkey fall ...

why did the third monkey fall out of the tree?

because it thought they were playing a game!

The young couple invited their aged pastor for Sunday dinner. While they were in the kitchen preparing the meal, the minister asked their son what they were having. "Goat," the little boy replied.

"Goat?" replied the startled man of the cloth, "Are you sure about that?"

A large two engine train was crossing America. After they had gone some distance one of the engines broke down. "No problem," the engineer thought, and carried on at half power.

Farther on down the line, the other engine broke down, and the train came to a standstill. The engineer decided he should inform the passengers about why the train had stopped, and made the following announcement:

"Ladies and gentlemen, I have some good news and some bad news. The bad news is that both engines have failed, and we will be stuck here for some time. The good news is that you decided to take the train and not fly." 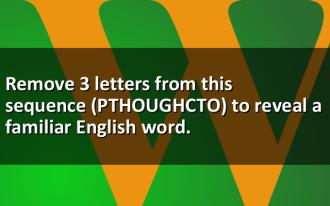 Growing up as a kid, I learned all about capitalism through the board game Monopoly. I mean, what better way to teach a young mind the way our economy functions. I loved this game and still do. Only now, as an adult I have some questions that remain unanswered.

For instance, if I have all this money and own all this real estate...why am I still driving around in a thimble?
#joke
Joke | Source: Jokes of the day - Used to be Joke rating machine, but this site is dead


What's another word for Thesaurus?
Why is the alphabet in that order? Is it because of that song? The guy who wrote that song wrote everything.
My grandfather invented Cliff's Notes. It all started back in 1912... Well, to make a long story short ...
I'm writing a book. I've got the page numbers done, so now I just have to fill in the rest.
I'm writing an unauthorized autobiography.
I owed my friend George $25. For about three weeks I owed it to him. The whole time I had the money on me -- he didn't know it. Walking through New York City, 2:30 in the morning and got held up. He said, "Gimme all your money." I said, "Wait a minute." I said, "George, here's the 25 dollars I owe you." The the thief took a thousand dollars out of his own money and he gave it to George. At gunpoint made me borrow a thousand dollars from George.
I'd like to sing you a song now about my old girlfriend. It's called, "They'll Find Her When the Leaves Blow Away 'Cause I'm Not Raking 'Til Spring."
My girlfriend asked me how long I was going to be gone on this tour. I said, "the whole time."
My girlfriend does her nails with white-out. When she's asleep, I go over there and write misspelled words on them.

What do you get when you cross...

What do you get when you cross a galaxy with a toad?
Star Warts!

#joke #christmas
Joke | Source: Jokes of the day - Taken from Bartender's guide to Jokes, Drinks, and Poker - once good site, no longer active.