Two avid fishermen go on a fishing trip. They rent all the equipment: the reels, the rods, the wading suits, the rowboat, the car, and even a cabin in the woods. They spend a fortune.
The first day they go fishing, but they don't catch anything. The same thing happens on the second day, and on the third day. It goes on like this until finally, on the last day of their vacation, one of the men catches a fish.
As they're driving home they're really depressed. One guy turns to the other and says, "Do you realize that this one lousy fish we caught cost us fifteen hundred dollars?"
The other guy says, "Wow! It's a good thing we didn't catch any more!"

Q: Mommy, Mommy! I hate spaghetti!
A: Shut up or I'll pull the veins out of your other arm.
#joke #short
Joke | Source: Comedy.com - The World Famous Comedy.com Daily Joke!

A truck driver was driving down the highway when he saw an elderly priest at the side of the road. He stopped to give him a ride.
#joke #short #lawyer
Joke | Source: jokes warehouse - Animal jokes, Blonde jokes, doctor jokes, drunk jokes and jokes of the day

"My other car is a broomstick."

One morning, a company CEO rea...

One morning, a company CEO read an unusual letter from one of his employees:

In thi$ life, we all need $ome thing mo$t de$perately. I think you $hould be under$tanding of the need$ of u$ worker$ who have given $o much $upport including $weat and $ervice to your company.

The next day, the employee received this reply:

I kNOw you have been working very hard. NOwadays, NOthing much has changed. You must have NOticed that our company is NOt doing NOticeably well as of yet.

NOw the newspapers are saying the world's leading ecoNOmists are NOt sure if the United States may go into aNOther recession. After the NOvember presidential elections things may turn bad.

I have NOthing more to add NOw. You kNOw what I mean.

Mother decided that 10-year-old Cathy should get something 'practical' for her birthday.

"Suppose we open a savings account for you?" mother suggested. Cathy was delighted.

"It's your account, Darling," mother said as they arrived at the bank, "so you fill out the application."

Cathy was doing fine until she came to the space for 'Name of your former bank.' After a slight hesitation, she put down, 'Piggy.' 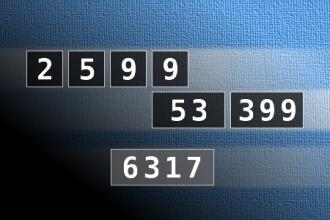 3 of them are dead

One day, two deputies in the Sheriff's Office answered an emergency call at a farmhouse. When they walked in, they found the nude bodies of a man and a woman in the bedroom. They had been shot to death.

When they went to the living room, they found the body of a man with a gun at his side.

"No doubt about it," one deputy said to the other. "This was a double murder and suicide. This guy came home and found his wife in bed with somebody else and shot them both. Then he shot himself."

"You're right," the other deputy replied. "Double murder and suicide. But I'll bet you when the sheriff gets here he's going to say 'it could have been worse.'"

"No way. How could it be worse? There are three people in the house, and all of them have been shot to death. It couldn't be worse. You're on."

"No doubt about it," the sheriff said, shaking his head. "It was a double murder and suicide. This guy came home and found his wife in bed with somebody else and shot them both. Then he shot himself."

After hesitating for a moment, the old sheriff looked his deputies squarely in the eyes. "But, you know," he said, "it could have been worse."

The deputy who had lost the bet jumped up and shouted, "Sheriff, how could it have been worse? There are three people in this farmhouse, and all three of them are dead. It couldn't have been worse."

"Yes it could," the sheriff retorted. "You see that guy there on the floor? If he had come home yesterday, that would be me in there in that bed!"

Professional Practical Jokes on the Groom

A dentist, an electrician, and a carpenter decide to play a practical joke their best friend on his wedding night.
Ill loosen some joints on his bed so it collapses when hes making love, says the carpenter.
Ill hot wire his mattress so theyll feel immense heat while making love, says the electrician.
Those are good ideas, says the dentist. But my contributions going to be a real surprise.
The next day the new husband comes to the diner to meet his friends. He says I congratulate you guys for making the bed heat up and collapse, but Im gonna kill whichever one of you put novocaine in the massage oil!
#joke
Joke | Source: Comedy Central: Jokes - Jokes provided daily from Comedy Central's archive.


Here's a way to spice up your office. Pick two or three colleagues and agree to play the Office Game which awards points as follows:
ONE POINT
Run one lap around the office at top speed. Walk sideways to the photocopier.
Find the vacuum and start vacuuming around your desk.
When they're not looking, pour most of someone's fresh cup of coffee into your mug leaving them with an inch of brew.
Ignore the first five people who say 'good morning' to you.
Phone someone in the office you barely know, leave your name and say "Just called to say I can't talk right now. Bye."
To signal the end of a conversation, clamp your hands over your ears and grimace.
While riding an elevator, gasp dramatically every time the doors open.
THREE-POINTS
Babble incoherently at a fellow employee then ask "Did you get all that, I don't want to have to repeat it." - Double points if you do this to a manager.
Kneel in front of the water cooler and drink directly from the nozzle.
Shout random numbers while someone is counting.
FIVE POINTS
At the end of a meeting, suggest that, for once, it would be nice to conclude with the singing of the national anthem (extra points if you actually launch into it yourself).
Walk into a very busy person's office and while they watch you with growing irritation, turn the light switch on/off 10 times.
For an hour, refer to everyone you speak to as 'Bob'.
Announce to everyone in a meeting that you "really have to go do number two".
After every sentence, say 'mon' in a really bad Jamaican accent. As in, "the report's on your desk, mon". Keep this up for one hour.
While an office mate is out, move their chair into the elevator.
In a meeting or crowded situation, slap your forehead repeatedly and mutter, "Shut up, all of you just shut up!"
In a colleague's diary, write in 10 am: "See how I look in tights".
Carry your laptop over to your colleague and ask "You wanna trade?"
Repeat the following conversation 10 times to the same person: "Do you hear that?" "What?" "Never mind, it's gone now"
Come to work in army fatigues and when asked why, say, "I can't talk about it"
Speak with an accent (French, German, Porky Pig, etc.) during a very important conference call.
Tuck one pant leg into your sock and when queried, answer, "not now" and walk away.

What's orange and sounds like a parrot?
A carrot!

The children had all been photographed, and the teacher was trying to persuade them each to buy a copy of the group picture. "Just think how nice it will be to look at it when you are all grown up and say, 'There's Jennifer; she's a lawyer,' or 'That's Michael, he's a doctor.'"

A small voice at the back of the room rang out, "And there's the teacher; ...she's dead."

#joke #doctor #lawyer
Joke | Old joke from joke of the day archives - Check out other old jokes Wednesday, 06 May 2009

Things that make you go hmmmmmm...

Do people in Australia call the rest of the world 'up over'?

Why doesn't Tarzan have a beard?

Why is it called lipstick if you can still move your lips?

Why is it that night falls but day breaks?

Why is the third hand on the watch called a second hand?

Why is it that when you're driving and looking for an address, you turn down the radio?

Why is lemon juice made with artificial flavor, and dishwashing liquid made with real lemons?

Can you buy an entire chess set in a pawn-shop?

Day light savings time - why are they saving it and where do they keep it?

Do you think that when they asked George Washington for ID that he just whipped out a quarter?

Have you ever imagined a world with no hypothetical situations?

How can there be self-help 'groups'?

Next time someone asks you if ...

Next time someone asks you if they can "sneak by you," ask them how the hell they plan to do that when you know they are going by.

Tell them that next time they should not warn you, and maybe, just maybe, they could sneak by.

What has four legs, is big, green, fuzzy, and if it fell out of a tree would kill you?
A snooker table.

Joke | Old joke from joke of the day archives - Check out other old jokes Friday, 20 June 2008

A guy burned both of his ears... so they were asking him at the hospital how it happened.
He said, ''I was ironing my clothing and the phone rang... So, instead of the phone I picked up the iron and burned my ear...''
''But how the heck did you burn the other ear?'' The doctor asked.
''They called back.''
#joke #doctor
Joke | Old joke from joke of the day archives - Check out other old jokes Friday, 20 June 2008

A man walks into a bar and sees a jar with money in it and a horse standing next to it. The bartender told the man to put a dollar in the jar and make the horse laugh. So the man put a dollar into the jar and told the horse something. Suddenly the horse began to laugh hysterically. The man took the money and left.

The man replied "On the first day, I told the horse my penis was longer than his, and on the second day, I showed him."