A woman is in bed with her lover who also happens to be her husband's best friend. They make love for hours, and afterward they're just lying there, enjoying the nearness of each other. The phone rings, and because it's the woman's house, she reaches over and picks up the receiver.
Her lover looks over and listens, only hearing her side of the conversation.
She is speaking in a cheery voice. " Hello? Oh, hi! SO glad you called. Really. That's wonderful! I'm so happy for you. Sounds terrific. Great! Thanks! Okay. Buh-bye."
She hangs up the phone and her lover asks, "Who was that?"
"Oh," she replies, " that was my husband telling me what a wonderful time he's having on his fishing trip with you."
#joke
Joke | Source: Joke Diary - Really Funny Jokes Daily

Do baristas listen to ...

A golfer is thrashing through ...

A golfer is thrashing through the bushes, looking for a lost ball. An old lady watches him as she sits on a bench knitting.

After half an hour the golfer is just about to give up, when the old lady says, "Excuse me. But is it against the rules if I tell you where it is?"

A Taliban was sitting in a cav...

A man goes to see the Rabbi. 'Rabbi, something terrible is happening and I have to talk to you about it.'
#joke #short
Joke | Source: jokes warehouse - Animal jokes, Blonde jokes, doctor jokes, drunk jokes and jokes of the day 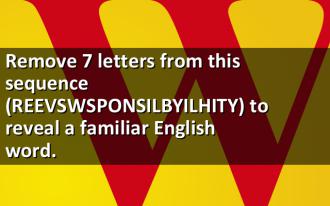 Remove 7 letters from this seq...

What Do You Call a Sleepwalking Nun?

Q: What do you call a nun who walks in her sleep?
A: A roaming Catholic.
This joke was reprinted from "The Book of Catholic Jokes" by Deacon Tom Sheridan, with permission of ACTA Publications. Copyright 2008. All rights reserved.

A man is out driving happily a...

A man is out driving happily along in his car late one Saturday night. Before too long, the cops pull him over. The policeman walks up to the man and asks, "Have you been drinking, sir?"

"Why? Was I weaving all over the road?" the man answered.

"No," replied the policeman, "you were driving splendidly. It was the ugly fat chick in the passenger seat that gave you away."
#joke #policeman
Joke | Source: Jokes of the day - Used to be Joke rating machine, but this site is dead

She left him on the sofa when the phone rang, and was back in a few seconds.

"My husband," she replied.

I Have A Big Problem


Bill and Boris are taking a break from a long summit. Boris says to Bill, "Bill, you know, I have a big problem. I don't know what to do about it. I have a hundred bodyguards and one of them is a traitor. I don't know which one."
"Not a big deal Boris, I'm stuck with a hundred economists I have to listen to all the time before any policy decision, and only one tells the truth but it's never the same one."

What's wrinkled and hangs out your underwear?

One day a little girl was sitting and watching her mother do the dishes at the kitchen sink. She suddenly noticed that her mother had several strands of white hair sticking out in contrast on her brunette head.
She looked at her mother and inquisitively asked, "Why are some of your hairs white, Mom?"
Her mother replied, "Well, every time that you do something wrong and make me cry or unhappy, one of my hairs turns white." The little girl thought about this revelation for a while and then said,
"Momma, how come ALL of grandma's hairs are white?"
#joke
Joke | Old joke from joke of the day archives - Check out other old jokes Sunday, 26 April 2009

MONA LISAÂ’S MOTHER: Â“After all that money your father and I spent on braces, thatÂ’s the biggest smile you can give us?Â”

MICHELANGELOÂ’S MOTHER: Â“CanÂ’t you paint on walls like other children? Do you have any idea how hard it is to get that stuff off the ceiling?Â”

NAPOLEONÂ’S MOTHER: Â“All right, if you arenÂ’t hiding your report card inside your jacket, take your hand out of there and show me.Â”

GEORGE WASHINGTONÂ’S MOTHER: Â“The next time I catch you throwing money across the Potomac, you can kiss your allowance good-bye!Â”

JONAHÂ’S MOTHER: Â“ThatÂ’s a nice story. Now tell me where youÂ’ve really been for the last forty years.Â”

THOMAS EDISONÂ’S MOTHER: Â“Of course IÂ’m proud that you invented the electric light bulb. Now turn it off and get to bed!Â”

PAUL REVEREÂ’S MOTHER: Â“I donÂ’t care where you think you have to go, young man, midnight is past your curfew.Â”

Slept on the floor

Michael Jackson claims that his partners would sleep in the bed, while he slept on the floor.

You know, it's the same arrangement the Clintons had.

One day at a busy airport, the passengers on a commercial airliner are seated, waiting for the cockpit crew to show up so they can get under way.

The pilot and copilot finally appear in the rear of the plane, and begin walking up to the cockpit through the center aisle. Both appear to be blind.

Both have their eyes covered with huge sunglasses. At first the passengers do not react thinking that it must be some sort of practical joke. However, after a few minutes the engines start revving and the airplane starts moving down the runway.

The passengers look at each other with some uneasiness. They start whispering among themselves and look desperately to the stewardesses for reassurance. Then the airplane starts accelerating rapidly and people begin panicking.

Some passengers are praying, and as the plane gets closer and closer to the end of the runway, the voices are becoming more and more hysterical.

Finally, when the airplane has less than 20 feet of runway left, there is a sudden change in the pitch of the shouts as everyone screams at once, and at the very last moment the airplane lifts off and is airborne.

Up in the cockpit, the copilot breathes a sigh of relief and tells the pilot, "You know, one of these days the passengers aren't going to scream, and we're gonna get killed!"
#joke

Joke | Old joke from joke of the day archives - Check out other old jokes Sunday, 26 October 2008

Some may think the cardiologist
Is their best friend
But the colorectal surgeon knows...
He'll get you in the end!

Why the colorectal surgeon?
It's one of those mysterious things.
Is it because in that profession
There are always openings?

When I first met a colorectal surgeon
He did not quite understand;
I said, "Hey it's nice to meet you
But do you mind? We don't shake hands."

A doctor he wanted to be
For golf he loved to play
But this is not quite what he meant...
By eighteen holes a day!

Praise the colorectal surgeon
Misunderstood and much maligned
Slaving away in the heart of darkness
Working where the sun don't shine!


Tired of his low approval ratings, President Clinton called up the head of the CIA and said, "I want your very best agent over here first thing in the morning."

Moments later, a call went out to the Middle East, and the most gifted American agent was headed back to Washington.

The next morning, the agent was escorted into the Oval Office. The President said, "I hear you're the best in the business. I can't trust what my staff tells me.

So I want you to visit every state in the union, every major city. I want you to stay out on the road until you have an idea of what the vast majority of Americans would like to see happen in the Oval Office. Understand?"

The CIA agent responded affirmatively. He left the White House and wasn't heard from for nearly four months. Finally, he showed up early on a Saturday morning, and the President saw him immediately.

The President said, "Did you find out what an overwhelming majority of Americans want done here in this office?"

"Well, then, express the will of the people," Clinton ordered.

So the agent stood up, pulled out a gun, and shot him.


Joke | Old joke from joke of the day archives - Check out other old jokes Sunday, 26 October 2008