During a terrible storm, all t...

During a terrible storm, all the highway signs were covered with snow. The following spring, the state decided to raise all the signs twelve inches at a cost of six million dollars. “That’s an outrageous price!” said a local farmer, “but I guess we’re lucky the state handled it instead of the federal government.” “Why’s that?”
“Because knowing the federal government, they’d decided to lower the highways.”

Two men are out just fishing quietly and drinking beer.
Almost silently, so as not to scare the fish, Bob says, 'I think I'm gonna divorce my wife. She hasn't spoken to me in over 2 months.'
Charles continues slowly sipping his beer then thoughtfully says, 'You better think it over, Bob. Women like that are hard to find.'

The Marriage of Miss Bad Breath and Mr. Smelly Feet

A young couple, madly in love, decided to get married. But as the wedding day neared, both grew increasingly nervous over secret problems they had never shared with anyone. Privately, the groom-to-be approached his minister.
“I’m really concerned about this marriage,” the young man said.
“Don’t you love her?” the pastor asked in surprise.
“Of course,” the groom said. “But I have unbelievably smelly feet—and I’m afraid my fiancée won’t be able to stand them.”
“Oh, is that all?” the pastor replied. “Look, all you need to do is wash your feet twice a day and wear socks all the time.”
The groom thought it over and decided it just might work.
Meanwhile, the nervous bride had privately approached the minister’s wife. “I’m so worried,” she sobbed. “I have really bad breath when I wake up each day!”
“Oh, dear,” the pastor’s wife replied,” everyone has bad breath in the morning. Don’t worry about it.”
“No, you don’t understand,” the bride implored. “My morning breath is so awful, my fiancé won’t even want to be near me!”
“Well, I have an idea,” the pastor’s wife said soothingly. “Set your alarm just a few minutes before your husband wakes up. Run to the bathroom, brush your teeth, and gargle with mouthwash before he gets out of bed. The key is not to say anything until you’ve taken care of your breath.”
The bride thought it over and decided it just might work.
In time, a beautiful wedding was held and the bride and groom enjoyed the day without once worrying about their secret problems. For several months they managed to keep their issues to themselves.
They one morning, the husband awoke before dawn to find that one of his socks had come off in the night. Frantic, he searched the bed, afraid of what might happen if he didn’t find his sock soon. His bride woke with a start, and, without thinking, blurted out, “What in the world are you doing?”
“Oh, dear!” the young man wailed. “You swallowed my sock!”
From "The Book of Church Jokes," published by Barbour Publishing, Inc., Uhrichsville, Ohio. Copyright 2009. Used by permission of Barbour Publishing, Inc.

A man dies and goes to Heaven. He gets to meet GOD and asks GOD if he can ask him a few questions.

"OK," the guy says. "But how come you made them so beautiful?"

"So you would LOVE them", GOD replies.

The man ponders a moment and then asks, "But why did you make them such airheads?"

GOD says, "So they would love you!"

Funny Photo of the day - About To Fail All it took to determine that ...

All it took to determine that the stray dog was stuck in a net was a cur-sieve glance .
#joke #short
Joke | Source: Pun Gents - Daily Jokes, One-liners, Groaners, Puns of the day :: Puns on Demand :: Punshine Girls and Boys!

The seven dwarfs went off to w...

The seven dwarfs went off to work in the mine one day, while Snow White stayed at home to do the housework and cook their lunch.
However when she went to the mine to deliver their lunches, she found there had been a cave-in, and there was no sign of the dwarfs.
Tearfully she yelled in to the mine entrance: "hello - is anyone there. Can anyone hear me".
A voice floated up from the bowels of the mine:
" Australia will win the Rugby World Cup"
"Thank god" said Snow White "at least Dopey's still alive"
#joke
Joke 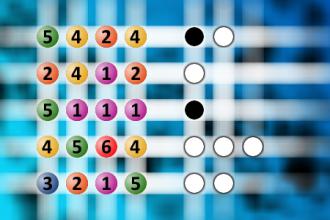 Three men are sitting naked in...

Three men are sitting naked in the sauna. Suddenly there is a beeping sound. The first man presses his forearm and the beeping stops. The others look at him questioningly.

"That's my pager," he says. "I have a microchip under the skin of my arm."

A few minutes later a phone rings. The second man lifts his palm to his ear. When he finishes he explains, "That's my mobile phone. I have a microchip in my hand."

The third man, feeling decidedly low-tech, steps out of the sauna. In a few minutes he returns with a piece of toilet paper extending from his rear. The others raise their eyebrows.

"I'm getting a Fax," he explained.
#joke
Joke

A little boy went to the store with his grandmother and on the way home, he was looking at the things she had purchased. He found a package of panty hose and began to sound out the words "QUEEN SIZE".

He then turned to his grandmother and exclaimed, "Look Granny, YOU wear the same size as our bed!"


A vampire joke
What happened to the mad vampire?
He went a little batty!

A demon joke
What is the best way to get rid of a demon?
Exorcise a lot!

A ghost joke
What kind of jewels to ghosts wear?
Tombstones!

A demon joke
Why do demons and ghouls get on so well?
Because demons are a ghouls best friend!

A vampire joke
Where do vampires go on holiday?
The Isle of Fright!

A man walks into his doctor and says "Doctor, doctor i have

a bit of an embarrising problem."

lettuce leaf growing out his backside.

The man asks "Do you think it's serious?"

The doctor replies, "To tell you the truth it looks like

just the tip of the iceberg."

While driving down the road a ...

While driving down the road a motorist passed a fairground and he noticed a fortune teller sitting under a canopy outside, laughing and smiling. The motorist drove on for a couple of miles down the road then spun his car around and sped back toward the fortune teller. He pulled up next to the woman, jumped out of his car and suddenly began slapping and beating her."What are you doing?" asked the injured woman. The man replied: "Well, I've always wanted to strike a happy m
#joke
Joke | Source: http://news.scotsman.com/ - Joke of the day

There was once a great actor, who had a problem. He could no longer remember his lines. Finally after many years he finds a theatre where they are prepared to give him a chance to shine again. The director says,"This is the most important part, and it has only one line. You must walk onto the stage carrying a rose, you must hold the rose with just one finger and your thumb to your nose, sniff the rose deeply and then say the line... 'Ah, the sweet aroma of my mistress.'" The actor is thrilled.All day long before the play he's practicing his line, over and over again. Finally the time came.
The curtain went up, the actor walked onto the stage, and with great passion, he delivered the line; "Ah, the sweet aroma of my mistress".
The theatre erupted, the audience screamed with laughter... and the director was steaming! "You bloody fool!" he cried, "You have ruined me!"
The actor, quite bewildered, asked, "What happened, did I forget my line?" he asked.
"No!" the director screamed.... "You forgot the bloody rose!"