A declawed cat has limited ...

At a bar Tom said to Bill; “Uncle tried to make a new kind of car. He took wheels from a Cadillac, radiator from a Lexus, tires from a Ford”
“What did he get? Asked Bill
“Two years.” Said Tom

Funny video of the day Sunday, 30 May 2010 - link to page video is posted initially.

A redneck was stopped by a game warden in Central Mississippi recently with two ice chests full of fish. He was leavin ' a cove well-known for its fishing.
r> The game warden asked the man, ' Do you have a license to catch those fish? '
r> ' Naw, sir ' , replied the redneck. ' I ain't got none of them there licenses. You must understand, these here are my pet fish. '
r> ' Pet fish? '
r> ' Yeah. Every night, I take these here fish down to the lake and let ' em swim ' round for awhile. Then, when I whistle, they jump right back into these here ice chests and I take ' em home. '
r> ' That's a bunch of hooey! Fish can't do that. '
r> The redneck looked at the warden for a moment and then said, ' It's the truth Mr. Government Man. I'll show ya. It really works. '
r> ' O. K.. ' , said the warden. ' I've got to see this! '
r> The redneck poured the fish into the lake and stood and waited.
r> After several minutes, the warden says, ' Well? '
r> ' Well, what? ' , says the redneck.
r> The warden says, ' When are you going to call them back? '
r> ' Call who back? '
r> ' The FISH ' , replied the warden!
r> ' What fish? ' , replied the redneck.
r> Moral of the story: We may not be as smart as some city slickers, but we ain't as dumb as some government employees.
r>
#joke
Joke | Source: jokes warehouse - Animal jokes, Blonde jokes, doctor jokes, drunk jokes and jokes of the day

Guy goes into a bar and orders...

Guy goes into a bar and orders a drink. Bartender brings him his drink and he pushes it aside and orders another. When the second drink arrives, he starts to drink it down.

For the next several hours, this same thing goes on. He waits a while... orders a drink... pushes it aside and then orders a second one and then starts to drink the second when it arrives.

After several hours of this and many drinks still lined up on the bar, the bartender finally decides to ask why the guy is doing this.

The guy starts to explain... "well, for the past few months I've been going to those AA meetings. Now, they have all these ideas about the 12 steps and such. I'm a simple guy and not too sure I understand it all, but the one thing they really push is to make sure you don't take that first drink..."
#joke
Joke I’m Sure The Backseat Sees A Lot Of Action

Strangers on a train...

A man and a woman who have never met before find themselves in the same sleeping carriage of a train. After the initial embarassment, they both manage to get to sleep; the woman on the top bunk, the man on the lower.

In the middle of the night, the woman leans over and says, "I'm sorry to bother you, but I'm awfully cold and I was wondering if you could possibly pass me another blanket."

The man leans out and, with a glint in his eye, says, "I've got a better idea....let's pretend we're married."

"Why not," giggles the woman.

"Good", he replies. "Get your own damn blanket."


If you have something to do, and you put it off long enough, chances are someone else will do it for you.
If you have to ask, you are not entitled to know.
If you just try long enough and hard enough, you can always manage to boot yourself in the posterior.
If you keep anything long enough, you can throw it away.
If you keep saying things are going to be bad, you have a chance of being a prophet.
If you live in a country run by committee, be on the committee.
If you make people think they're thinking, they'll love you; but if you really make them think they'll hate you.
If you mess with a thing long enough, it will break.
If you plan to leave your mark in the sands of time, you better wear work shoes.
If you put it off long enough, it might go away. 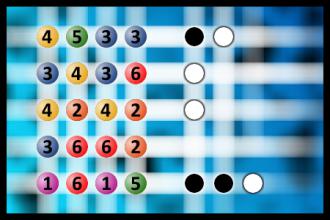 Blonde in the Mornin

What does a blonde do when she wakes up?

The worst television is MTV. Music Television -- they call it that, they dont even play music. Hows that legal? What if everybody did that? Hey, thanks for calling New York Pizza. Yeah, give me two large pepperoni pizzas. Oh, we dont sell pizza. What? No, we just have raccoon hats and eye patches. Call a book store if youre hungry.
#joke
Joke | Source: Comedy Central: Jokes - Jokes provided daily from Comedy Central's archive.

An explorer walked into a clea...

An explorer walked into a clearing and was surprised to see a pigmy standing beside a huge dead elephant. "Did you kill that?" he asked. The pigmy answered: "Yes". "How could a little bloke like you kill something as huge as that?"
"I killed it with my club" replied the pigmy.
"That's amazing," said the explorer. "How big's your club?"
The pigmy replied: "There's about 150 of us"

A very shy guy goes into a bar and sees a beautiful woman sitting at thebar. After an hour of gathering up his courage he finally goes over to herand asks, tentatively, "Um, would you mind if I chatted with you for awhile?"
She responds by yelling, at the top of her lungs, "No, I won't sleep withyou tonight!" Everyone in the bar is now staring at them.
Naturally, the guy is hopelessly and completely embarrassed and he slinksback to his table.
After a few minutes, the woman walks over to him and apologizes. Shesmiles at him and says, "I'm sorry if I embarrassed you. You see, I'm agraduate student in psychology and I'm studying how people respond toembarrassing situations."
To which he responds, at the top of his lungs, "What do you mean $200?"
#joke
Joke | Old joke from joke of the day archives - Check out other old jokes Wednesday, 09 December 2009

Hospital regulations require a wheel chair for patients being
discharged. However, while working as a student nurse, I found
one elderly gentleman already dressed and sitting on the bed with
a suitcase at his feet, who insisted he didn't need my help to leave
the hospital.

After a chat about rules being rules, he reluctantly let me wheel
him to the lift.

On the way down I asked him if his wife was meeting him.

'I don't know,' he said. 'She's still upstairs in the bathroom
changing out of her hospital gown.'
#joke
Joke | Old joke from joke of the day archives - Check out other old jokes Wednesday, 22 July 2009

JEWBILATION - Pride in finding out that one's favorite celebrity is Jewish.
TORAHFIED - Inability to remember one's lines at one's Bar or Bat mitzvah.
CHUTZPAPA - A father who wakes his wife at 4:00 AM so she can change the baby's diaper.
DISORIYENTA - When Aunt Sadie gets lost in a department store and strikes up a conversation with everyone she passes.
MISHPOCHAMARKS - The assorted lipstick and make-up stains found on one's face and collar after kissing all one's aunts and cousins at a reception.
ROSH HASHANANA - A rock 'n roll band from Brooklyn.
FEELAWFUL - Indigestion from eating Israeli street food.
KINDERSCHLEP - To transport other kids in your car besides yours.
OYVAYSMEAR - What one says when the cream cheese squeezes out of the bagel and falls on your clean pants.
JEWDO - A traditional form of self-defense based on talking one's way out of a tight spot.

Q: What runs around a field but never moves?
A: A fence
#joke #short
Joke | Old joke from joke of the day archives - Check out other old jokes Saturday, 30 May 2009