Handing out entry bracelets at...

A man enters his local bar holding a frog and an iguana. He sets them down on the bar and says to the bartender, "I bet you $1000 that my frog here can sing any song you can think of." "Ok," says the bartender. "How 'bout 'Blue Moon'?" The man whispers something to the frog, and the frog starts singing blue moon. "That's amazing," says the bartender as he slaps down $1000. "I'll bet ya another $1000 that my iguana here can do that to." "Ok, I can believe a frog, but not an iguana. You're on. Have him sing the Star Spangled Banner." The man whispers something to the iguana and it sings the Star Spangled Banner. As the bartender hands over another $1000, a businessman comes up and says, "I just saw that and I was amazed. I want to buy your iguana for $100,000." The man said ok, and he exchanged the iguana for the money and the businessman left. The bartender said "What are you nuts?! You could have made millions with that iguana!" The man said "Oh, the iguana can't sing. The frog's a ventriloquist."
#joke
Joke | Source: A joke a day - Free Jokes of the Day Clean Funny Jokes via Email, Humor and Entertainment Ole jumps out of the plane and proceeds to pull the first cord. The small chute doesn't open so he pulls the last cord and the large parachute doesn't open either. Ole thinks to himself, "It will be just my luck that the car won't be there either" 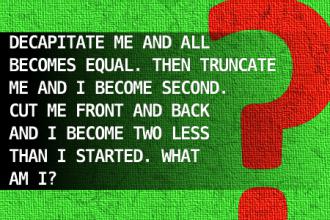 Decapitate me and all becomes ...

Decapitate me and all becomes equal. Then truncate me and I become second. Cut me front and back and I become two less than I started. What am I?
CHECK ANSWER
Brain Teasers, puzzles, riddles, mathematical problems, mastermind, cinemania...

Without A Christmas Bonus


Ten signs you're not getting a christmas bonus
10. Co-workers refer to you as "the ghost of unemployment future"
9. The last time you saw your boss was when he testified against you at the embezzlement trial
8. On your door, you find a lovely wreath of pink slips

7. What you call "my new office," everybody else calls "the supply closet"
6. Boss's Christmas card says, "Don't let the door hit you on the way out"
5. You keep getting memos reminding you that employees are required to wear pants
4. When your boss came over for Thanksgiving, he was crushed under an avalanche of stolen office supplies
3. Whenever you ask for a raise, a guy shows up at your house and breaks your jaw
2. In your most recent performance evaluation, the word "terrible" appeared 78 times
1. You're the starting quarterback for the New York Jets

The Kentuckian and his gal were embracing passionately in the front seat of the car.

"Want to go in the back seat?" she asked.

A few minutes later she asked, âNow do you want to get in the back seat?â

Wouldnt it be great if our bodies were designed so that instead of bad things, good things could be transmitted through sex? Like skills. Oh baby, Im gonna do you til you can juggle. Oh my God, dont stop til Im a carpenter, computer programming, air conditioner refrigeration, auto mechanic -- whatever the hell Sally Struthers says in that commercial. How was your date last night? You get lucky? I think my resume speaks for itself.
#joke
Joke | Source: Comedy Central: Jokes - Jokes provided daily from Comedy Central's archive.

ATTORNEY: Are you sexually a...

ATTORNEY: Are you sexually active?
WITNESS: No, I just lie there.

An engineer dies and reports to hell.

Pretty soon, the engineer becomes dissatisfied with the level of comfort in hell, and starts designing and building improvements. After a while, they've got air conditioning and flush toilets and lifts, and the engineer is a pretty popular guy.

One day God calls Satan up on the telephone and says with a sneer: "So, how's it going down there in hell?"

Satan replies: "Hey things are going great. We've got air conditioning and flush toilets and lifts, and there's no telling what this engineer is going to come up with next."

God replies: "What??? You've got an engineer? That's a mistake - he should never have gone down there; send him up here."

Satan says: "No way. I like having an engineer on the staff, and I'm keeping him."

Satan laughs and answers: "Yeah, right. And just where are you going to get a lawyer?"

(With apologies to any lawyers reading this ... but the rest of us think it's funny ...)

A man and his wife were having an argument in bed. He finally jumped up and took a blanket to the couch.

The next day the wife feeling bad about what happened decided to buy her husband a gift, and since he was an avid golfer she went to the pro shop where he usually played golf. She talked with the pro and he suggested a putter and he showed her one of his finest.

"One hundred and fifty dollars," he replied.

She felt that was kind of expensive and told him so.

"But it comes with an inscription," he said.

"What kind of inscription?" she asked.

"Whatever you wish," he explained, "but one of the old golfers favourites is, 'NEVER UP, NEVER IN."

"Oh, that will never do!" exclaimed the wife. "That's what started the argument in the first place!"

A Dell customer called to say he couldn't get his computer to fax anything. After 40 minutes of trouble-shooting, the technician discovered the man was trying to fax a piece of paper by holding it in front of the monitor screen and hitting the "send" key.
#joke #short
Joke | Old joke from joke of the day archives - Check out other old jokes Friday, 15 August 2008