Two old drunks are sitting in a bar when the first one says, "Ya know, when I was thirty and got an erection, I couldn't bend it, even using both hands.
By the time I was forty, I could bend it about ten degrees if I tried really hard.
By the time I was fifty, I could bend it about forty five degrees, no problem.
I'm gonna be sixty next week, and now I can bend it in half with just one hand."
"So," says the second drunk, "what's your point?"
"Well, I'm just wondering how much stronger I'm gonna get."

The largest rear end I ever sa...

At a divorce court a family of...

John, a well-to-do bachelor, invited his mother over for dinner one night. During the meal, Mom couldn't help notice how attractive and shapely the house keeper was, and wondered if there was more going on than meets the eye. John sensing what his mother was thinking said to her "I know what you're thinking, Mom, but I assure you my relationship with the house keeper is purely professional."

A few days later he receives a note from his mother. "John: I'm not saying you sleep with your house keeper, nor am I saying you're not. But the fact remains that if she were sleeping in her own bed she would have found the gravy ladle by now. Love, Mom".

Funny Photo of the day - How Otaku are Birthed How Otaku are Birthed | Source : Jokes photos - Used to be - WTF Pictures and WTF videos - but site no longer exists


Indecision is the key to flexibility.
Indifference is the only sure defense.
Information deteriorates upward through bureaucracies.
Information travels more surely to those with a lesser need to know.
Information's pretty thin stuff, unless mixed with experience.
Inside every large problem is a small problem struggling to get out.
Inside every small problem is a larger problem struggling to get out.
Instead of calling in sick, call in well. Tell them how great you feel not having to go to work today.
Interchangeable parts won't.
Is there life before coffee?
It may be bad manners to talk with your mouth full, but it isn't too good either if you speak when your head is empty.

Four nuns are standing in line for confession. The first nun goes into the confessional and says bless me father for I have sinned I touched a manâs private parts.

The priest asks, "What part of your body did you use?"

The nun replies, "My right hand."

The priest tells her to dip her right hand in holy water say 10 hail Maryâs and all will be forgiven.

The second nun goes into the confessional and says, "Bless me father for I have sinned I touched a mans private parts."

The priest asks, "What part of your body did you use?"

The nun replies, "My left hand." The priest tells her to dip her left hand in the holy water say 10 hail Maryâs and all will be forgiven.

Well, this leaves the third and fourth nun standing in line. The fourth nun taps the third nun on the shoulder and asks, "Would you mind if I went first?"

The third nun says, "Sure I don't care, but would mind telling me why?"

The fourth nun replies, "Well, I would like to drink the water before you have to sit in it!" 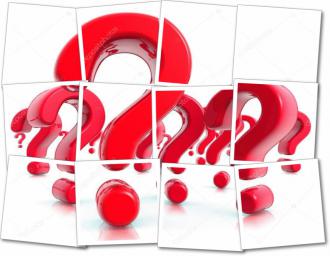 They have not flesh, nor fea...

They have not flesh, nor feathers, nor scales, nor bone. Yet they have fingers and thumbs of their own. What are they?
CHECK ANSWER
Brain Teasers, puzzles, riddles, mathematical problems, mastermind, cinemania...

Why would they know the end of the world? They didnt have any pants. Did you know that? They didnt have the invention of pants. You think you can crack the secrets of the universe but not the secret of pockets? They just made a lot of calendars and they never said its the end of the world -- goofy white people made that up.
#joke
Joke | Source: Comedy Central: Jokes - Jokes provided daily from Comedy Central's archive.

The difference between Republi...

The difference between Republicans & Democrats

A Republican and a Democrat were walking down the street when they came to a homeless person.

The Democrat was very impressed, and when they came to another homeless person, He decided to help. He walked over to the homeless person and gave him directions to the welfare office. He then reached into the Republicans pocket and gave him fifty dollars.
#joke
Joke | Old joke from joke of the day archives - Check out other old jokes Monday, 07 December 2009

The organs of the body were ha...

Three desperately ill men met with their doctor one day to discuss their options. One was an alcoholic, one was a chain smoker, and one was a homosexual.

The doctor, addressing all three of them, said, "If any of you indulge in your vices one more time, you will surely die." The men left the doctor's office, each convinced that he would never again indulge himself in his vice.

While walking toward the subway for their return trip to the suburbs, they passed a bar. The alcoholic, hearing the loud music and seeing the lights, could not stop himself. His buddies accompanied him into the bar, where he had a shot of whiskey. No sooner had he replaced the shot glass on the bar, he fell off his stool, stone cold dead.

His companions, somewhat shaken, left the bar, realizing how seriously they must take the doctor's words. As they walked along, they came upon a cigarette butt lying on the ground, still burning.

The homosexual looked at the chain smoker and said, "If you bend over to pick that up, we're both dead."
#joke #doctor

Joke | Old joke from joke of the day archives - Check out other old jokes Monday, 06 October 2008

While sports fishing off the Florida coast, a tourist capsized his boat. He could swim, but his fear of alligators kept him clinging to the overturned craft.

Spotting an old beachcomber standing on the shore, the tourist shouted, "are there any gators around here?!"

"Naw," the man hollered back, "Ain't been any for years!"

Feeling safe, the tourist started swimming toward the shore. About halfway there he asked the guy, "How'd you get rid of the gators?"

"We didn't do nothin'," the beachcomber said. "The sharks got 'em."

An Irishman, an Aussie and a Blonde Guy were doing construction work on scaffolding on the 20th floor of a building.

The Aussie opened his lunch box and exclaimed, "Steak again! If I get steak one more time I'm going to jump off, too."

The blonde opened his lunch and said, strasburg again! If I get a strasburg sandwich one more time, I'm jumping too."

The next day, the Irishman opened his lunch box, saw corned beef and cabbage, and jumped to his death.

The Aussie opened his lunch, saw steak and jumped, too.

The blonde guy opened his lunch, saw the strasburg and jumped to his death as well.

At the funeral, the Irishman's wife was weeping. She said, "If I'd known how really tired he was of corned beef and cabbage, I never would have given it to him again!"

The Aussie's wife also wept and said, "I could have given him ham & cheese! I didn't realise he hated steak so much."

Everyone turned and stared at the blonde's wife.

The blonde's wife said, "Don't look at me. He made his own lunch.

How many men does it take to change a roll of toilet paper? Who knows -- has it ever happened?
#joke #short
Joke | Old joke from joke of the day archives - Check out other old jokes Monday, 06 October 2008


You know how to you make God laugh?

Tell him your plans.