A New York family bought a ranch out west where they intended to raise cattle. Friends came to visit and asked if the ranch had a name.
"Well," said the would-be-cattleman. "I wanted to call it the Bar-J, my wife favored the Suzy-Q, one son liked the Flying-W, and the other son wanted the Lazy-Y. So, we're calling it the Bar-J-Suzy-Q-Flying-W-Lazy_Y."
"But, where are all your cattle?"
"None have survived the branding."
#joke
Joke | Source: A joke a day - Free Jokes of the Day Clean Funny Jokes via Email, Humor and Entertainment

Seems a Kansan makes a rolling stop at a stop sign, and gets pulled over by a Lenexa policeman. Guy hands the lawman his driver's license, insurance verification, plus his concealed carry permit.
"Okay, Mr. Smith," the policeman says, "I see your CCW permit. Are you carrying today?"
"Yes, I am."
"Well then, better tell me what you got."
Smith says, "Well, I got a .357 revolver in my inside coat pocket. There's a 9mm semi-auto in the glove box. And, I've got a .22 magnum derringer in my right boot."
"Okay," the officer says. "Anything else?"
"Yeah, back in the trunk, there's an AR-15 and a shotgun. That's about it."
"Mr. Smith, are you on your way to or from a gun range...?"
"Nope."
"Well then, what are you afraid of....?"
"Not one damn thing!"

Little Johnny was in church wi...

Little Johnny was in church with him mom for Sunday Mass when he suddenly felt nauseous.

So Little Johnny hauled ass for the door.

Less than a minute later, he returned to his seat next to his mom. He had the look of obvious relief on his young face.

"Did you make it all the way to the bushes, Johnny?"

Just as I got to the front door, I found a box that had a sign on it: 'FOR THE SICK'
#joke
Joke | Source: Jokes of the day - Used to be Joke rating machine, but this site is dead 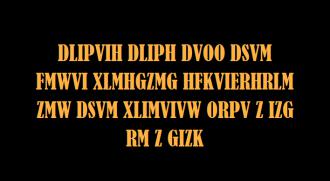 I think people need to think more before they speak. The other day I was walking along the street, and this gorgeous girl rides by on a bicycle. And the guy in the group ahead of me says, Man, look at her. Wish I could be that bicycle seat. Im like, what? Dont you think thats a little bit of an unrealistic goal? Besides, if youre going for it, why dont you just aim to be the guy thats sleeping with her? Maybe something that doesnt require sorcery.
#joke
Joke | Old joke from joke of the day archives - Check out other old jokes Monday, 04 October 2010

Three sons left home, went out on their own and prospered. They discussed the gifts they were able to give their elderly mother.
The first said: "I built a big house for our mother."
The second said: "I sent her a Mercedes with a driver."
The third said: "You remember how our mother enjoys reading the Bible. Now she can't see very well. So I sent her a remarkable parrot that recites the entire Bible. It took elders in the church 12 years to teach him. Mama just has to name the chapter and verse and the parrot recites it."
Soon thereafter, their mother sent out her letters of thanks. "William," she said, "the house you built is so huge. I live only in one room, but I have to clean the whole house.
"Arnold," she said, "I am too old to travel. I stay most of the time at home so I rarely use the Mercedes. And that driver is so rude! He's a pain!"
"But David," she said, "the chicken was delicious!"

As the plane settled down at Ben Gurion airport, the voice of the Captain came on:
"Please remain seated with your seatbelt fastened until this plane is at a complete standstill and the seat belt signs have been turned off.""To those of you standing in the aisles, we wish you a Happy Hanukkah."
"To those who have remained in their seats, we wish you a Merry Christmas."

#joke #christmas
Joke | Old joke from joke of the day archives - Check out other old jokes Friday, 29 May 2009

Whats black and white and red all over? Mimes in a chainsaw fight.
#joke #short
Joke | Old joke from joke of the day archives - Check out other old jokes Wednesday, 13 January 2010

Finally, a definition of Marke...

Finally, a definition of Marketing that makes sense....

You see a gorgeous girl at a party. You go up to her and say, "I'm fantastic in bed." That's Direct Marketing.

You're at a party with a bunch of friends and see a gorgeous girl. One of your friends goes up to her and pointing at you says, "He's fantastic in bed." That's Advertising.

You see a gorgeous girl at a party. You go up to her and get her telephone number. The next day you call and say, "Hi, I'm fantastic in bed." That's Telemarketing.

You're at a party and see a gorgeous girl. You get up and straighten your tie, you walk up to her and pour her a drink. You open the door for her, pick up her bag after she drops it, offer her a ride, and then say, "By the way, I'm fantastic in bed." That's Public Relations.

You're at a party and see a gorgeous girl. She walks up to you and says, I hear you're fantastic in bed." That's Brand Recognition.
#joke
Joke | Old joke from joke of the day archives - Check out other old jokes Wednesday, 13 January 2010