This must be a joke: the Canadian dollar is at parody.
#joke #short
Joke | Source: Pun Gents - Daily Jokes, One-liners, Groaners, Puns of the day :: Puns on Demand :: Punshine Girls and Boys!

A man wrote a letter to the IRS: “I have been unable to sleep knowing that I have cheated on my income tax. I understated my taxable income and have enclosed a check for $200.00. If I still can’t sleep, I will send the rest.”
#joke #short
Joke | Source: A joke a day - Free Jokes of the Day Clean Funny Jokes via Email, Humor and Entertainment

At school, a boy is told by a classmate that most adults are hiding at least one dark secret, and that this makes it very easy to blackmail them by saying, "I know the whole truth" even when you don't know anything.
The boy decides to go home and try it out. As he is greeted by his mother at the front door he says, "I know the whole truth." His mother quickly hands him $20 and says, "Just don't tell your father."
Quite pleased, the boy waits for his father to get home from work, and greets him with, "I know the whole truth." The father promptly hands him $40 and says, "Please don't say a word to your mother."
Very pleased, the boy is on his way to school the next day, when he sees the mailman at his front door. The boy greets him by saying, "I know the whole truth."
The mailman drops the mail, opens his arms and says, "Then come give your FATHER a big hug!"
#joke
Joke | Source: jokes warehouse - Animal jokes, Blonde jokes, doctor jokes, drunk jokes and jokes of the day

After numerous rounds of, &quo...

After numerous rounds of, "We don't even know if Osama is still alive," Osama himself decided to send George W. a letter in his own handwriting to let him know he was still in the game.

Bush opened the letter and it appeared to contain a coded message:

Bush was baffled, so he typed it out and emailed it to Colin Powell. Colin and his aides had no clue either so they sent it to the CIA. No one could solve it so it went to the NSA and then to MIT and NASA and the Secret Service.

Eventually they asked Canada's RCMP for help. The RCMP cabled the White House:
"Tell the President he is looking at the message upside down!"
#joke
Joke A police officer sees a man driving around with a pickup truck full of penguins. He pulls the guy over and says, "You can't drive around with penguins in this town! Take them to the zoo immediately."

The guy obliges and drives away.

The next day, the officer sees the same guy driving around with the truck full of penguins again. This time, though, all the penguins are wearing sunglasses.

The police officer pulls the guy over and says, "I thought I told you to take these penguins to the zoo yesterday?"

The guy replies, "I did, and today I'm taking them to the beach."

Has the attention span of an overripe grapefruit.
Has the brains of a house plant.
Has the Grand Canyon under the crew cut.
Has the IQ of a salad bar / an ice cube / three below houseplant.
Has the keen awareness of an ostrich in hiding.
Has the mental agility of a soap dish.
Has the personality of a snail on Valium.
Has the same talent as Dr. Doolittle.
Has two brains; one is lost and the other is out looking for it.
Hasn't caught on that X and Y are relative values.
Hasn't got all his china in the cupboard.
Hasn't got the brains God gave a cat.
Having a party in his head, but no one else is invited.
He can only type in upper case.
He can push but he can't pop. 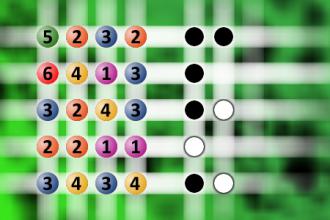 We have a whole religion based on a woman who really stuck to her story.
#joke #short
Joke | Source: Comedy Central: Jokes - Jokes provided daily from Comedy Central's archive.

Doctor: You're in good health. You'll live to be eighty.
Patient: But, doctor, I am 80 right now.
Doctor: See, what did I tell you.
#joke #short #doctor
Joke | Old joke from joke of the day archives - Check out other old jokes Tuesday, 07 July 2009

My home church welcomes all denominations, but really prefers tens and twenties.

#joke #short
Joke | Old joke from joke of the day archives - Check out other old jokes Wednesday, 13 May 2009

What do you call a blonde in a leather jacket?

A rebel without a clue!

Looking for a Lumberjack...

A large, well established, Canadian lumber camp advertised that they were looking for a good Lumberjack.

"Just give me a chance to show you what I can do," said the skinny man.

"Okay, see that giant redwood over there?" said the lumberjack. "Take your axe and go cut it down."

The skinny man headed for the tree, and in five minutes he was back knocking on the lumberjack's door.

The lumberjack couldn't believe his eyes and said, "Where did you get the skill to chop down trees like that?"

"In the Sahara Forest," replied the puny man.

"You mean the Sahara Desert," said the lumberjack.

The little man laughed and answered back, "Sure, that's what they call it NOW!"

A pregnant woman went to the g...

A pregnant woman went to the gynecologist, and when asked that was the problem, she responded, "Well, whenever I take off my clothes, my nipples get hard."

Shocked, the doctor took a deep breath, then asked, "Your nipples get hard?"

"Yes" quite innocently came her reply.

"Undress so I can check" replied the still amazed doc.

So, she undressed, and he got down to the feeling and massaging, trying to reach an answer.

After some considerable time, the doctor, still looked puzzled, said, "Well madame, I don't know what you have, but it sure as hell is contagious!"
#joke #doctor
Joke | Old joke from joke of the day archives - Check out other old jokes Thursday, 19 March 2009

Welcome to the Psychiatric Hotline

If you are obsessive compulsive, please press 1 repeatedly.

If you are co-dependent, please ask someone to press 2.

If you are paranoid-delusional, we know who you are and what you want. Just stay on the line so we can trace the call.

If you are schizophrenic, listen carefully and a little voice will tell you which number to press.

If you are manic-depressive, it doesn't matter which number you press. No one will answer.

If you are anxious, just start pressing numbers at random.

If you are phobic, don't press anything.