Lepers live and die by...

After the christening of his b...

After the christening of his baby brother in church, Jason sobbed all
the way home in the back seat of the car, his father asked him three
times what was wrong. Finally, the boy replied, "That preacher said he
wanted us brought up in a Christian home and I wanted to stay with you
guys."

Two little kids are in a hospital, lying on stretchers next to each other outside the operating room.
The first kid leans over and asks, "What are you in here for?"
The second kid says, "I'm in here to get my tonsils out and I'm a little nervous."
The first kid says, "You've got nothing to worry about. I had that done when I was four. They put you to sleep, and when you wake up they give you lots of Jell-O and ice cream. It's a breeze."
The second kid then asks, "What are you here for?"
The first kid says, "A circumcision."
"Whoa!" the second kid replies. "Good luck, buddy. I had that done when I was born. Couldn't walk for a year."

A little boy was afraid of the dark. One night his mother told him to go out to the back porch and bring her the broom.

The little boy turned to his mother and said, "Mama, I don't want to go out there. It's dark."

The mother smiled reassuringly at her son. "You don't have to be afraid of the dark," she explained. "Jesus is out there. He'll look after you and protect you."

The little boy looked at his mother real hard and asked, "Are you sure he's out there?"

"Yes, I'm sure. He is everywhere, and he is always ready to help you when you need him," she said.

The little boy thought about that for a minute and then went to the back door and cracked it a little. Peering out into the darkness, he called, "Jesus? If you're out there, would you please hand me the broom?"

Funny Photo of the day - Rock-crawling Is So Last Year… Rock-Rolling Is In! Rock-crawling Is So Last Year… Rock-Rolling Is In! | Source : That will buff out - funny auto escapade

Always By My Side

A woman's husband had been slipping in and out of a coma for several months, yet she stayed by his bedside every single day.

When he came to, he motioned for her to come nearer.

"What dear?" She asked gently.

"I think you bring me bad luck."

This is America. It is my God given right to be loudly opinionated about something I am completely ignorant of.
#joke #short
Joke | Source: Comedy Central: Jokes - Jokes provided daily from Comedy Central's archive. 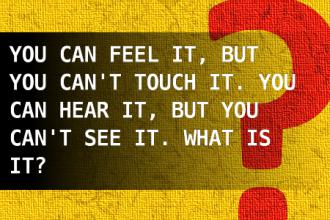 
Q: What happened when the lion ate the comedian?

A: He felt funny!

A: A tiger on a pogo stick!

Q: What is the cat's favorite TV show?
A: The evening mews!

Q: How can you get a set of teeth put in for free?

Q: How is cat food sold?
A: Usually purr can!

Q: What flies around your light at night and can bite off your head?

Q: What does the lion say to his friends before they go out hunting for food?

Too Little, Too Late

A man arrived at the Pearly Gates, waiting to be admitted. St. Peter opened the gate and said, â€œIâ€™ve been checking your file. I canâ€™t see that you did anything really good in your life, but you never did anything bad either. Iâ€™ll tell you whatâ€”if you can tell me one really good deed that you did, Iâ€™ll admit you.â€
So the man answered, â€œOnce I was driving down the road and saw a gang of thugs attaching a poor man along the side of the road. So I pulled over, got out of my car, grabbed a tire iron, and walked straight up to the gangâ€™s leaderâ€”a huge, ugly guy with a chain running from his nose to his ear. Undaunted, I ripped the chain out of his ear and smashed him over the head with the tire iron. Then I turned around and, wielding my tire iron, yelled to the rest of them, â€œYou all leave this poor man alone! Go home before I teach you a lesson youâ€™ll never forget!â€
Impressed, St. Peter asked, â€œReally? I canâ€™t seem to find this in your file. When did all this happen?â€
"Oh, about two minutes ago.â€
This joke was reprinted from "Laugh Yourself Healthy" by Charles and Frances Hunter, with permission of Strang Communications. Copyright 2008. All rights reserved.

Top 10 Reasons You know you are too old to Trick or Treat when:

10. You get winded from knocking on the door.
9. You have to have another kid chew the candy for you.
8. You ask for high fiber candy only.
7. When someone drops a candy bar in your bag, you lose your Balance and fall over.
6. People say: "Great Boris Karloff Mask," And you're not wearing a mask.
5. When the door opens you yell, "Trick or..." And you can't remember the rest.
4. By the end of the night, you have a bag full of restraining orders
3. You have to carefully choose a costume that won't dislodge your hairpiece.
2. You're the only Power Ranger in the neighborhood with a walker.

And the number one reason you know you are too old to go Trick Or Treating...

1. You have to go home to pee after every other house.
#joke

Joke | Old joke from joke of the day archives - Check out other old jokes Sunday, 23 November 2008