Three men wanted to cross a river. They had no idea how to cross it, so one man knelt down on his knees and prayed, "Lord give me the power and strength to cross the river." Suddenly, the man became very strong and swam across the river.

The next man thought that if it worked for him, it'll work for me. So he knelt down and prayed, "Lord give me the skills and the strength to cross the river." The man built a canoe and rowed himself across the river.

The last man thought that if it worked for both of them, I know it'll work for me. So he also knelt down and prayed, "Lord give me the wisdom and knowledge to cross the river." He turned into a woman and walked across the bridge.

The road by my house was in bad condition. Every day I dodged potholes on the way to work, so I was relieved to see a construction crew working on the road one morning.

Later, on my way home, I noticed the men were gone and no improvement in the road. But where the crew had been working stood a new, bright-yellow sign with the words “Rough Road.”

Exhausted Cat - It was a long day. - link to page video is posted initially.

Any guesses why are there so many Harley Davidson billboards on the highway?It is to help the riders know how far it is to the next repair garage.
#joke #short
Joke | Source: Really Funny Jokes - Really Funny jokes, adult jokes, Good jokes, short funny jokes, teacher jokes, affair jokes, kids jokes, doctor jokes, funny pictures

The story of how I discovered ... Problem, Officer? | Source : There I fixed it - photos of ur handiwork! 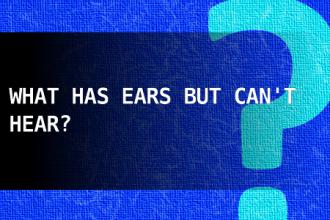 What has ears but can't hear?

A Blonde walks into a Restarau...

A Blonde walks into a Restaraunt, and she goes straight to the bulletin board in the back. The blonde is looking at the bulletin board and she sees a piece of paper that sais "Ocean Cruise Only 5$" She pulls the piece of paper off the wall and goes to the address listed on the back of paper. She walks into the building and hands the secretary the piece of paper. The secretary nods and asks if she had the five dollars. The blonde nods and pulls five dollars out of her pocket and hands it to the secretary. The secretary looks over to a burly black guy reading a news paper. She nods to the black guy. He stood up and nocks the blonde unconcious. When the blonde wakes up she's tied to a log and is floating down river. She started to think that this was a bad idea. When she sees one of her freinds (who is also blonde) tied to a log floating right next to her. In a Joking manner blonde she looks at her freind and says "So do you think they're going to serve us some food on this trip?"
The other blonde replies "They didn't serve any last year."
#joke #blonde
Joke | Old joke from joke of the day archives - Check out other old jokes Friday, 25 December 2009

The best Norm quotes from "Cheers"!

'What's shaking Norm?'
'All four cheeks & a couple of chins.'

'What'd you like Normie?'
'A reason to live. Give me another beer.'

'What'll you have Normie?'
'Well, I'm in a gambling mood Sammy. I'll take a glass of whatever comes out of that tap.'
'Looks like beer, Norm.'
'Call me Mister Lucky.'

'Hey Norm, how's the world been treating you?'
'Like a baby treats a diaper.'

'What's the story Mr. Peterson?'
'The Bobbsey twins go to the brewery. Let's cut to the happy ending.'

'Beer, Norm?'
'Have I gotten that predictable? Good.'

'What's going on Mr. Peterson?'
'A flashing sign in my gut that says, 'Insert beer here.''

'Whatcha up to Norm?'
'My ideal weight if I were eleven feet tall.'

'How's life treating you Norm?'
'Like it caught me sleeping with its wife.'

'What's going down, Normie?'
'My butt cheeks on that bar stool.'

Bill & Hillary Clinton were sleeping one night at the White House. Hillary wakes up and starts shaking Bill to wake him up. "Bill, Bill wake up."

Bill finally wakes up and says, "What do you want?"

Hillary responds, "I have to go use the bathroom."

To which Bill says, "Please tell me you didn't wake me up just to tell me you have to go to the bathroom."

Hillary says, "No, I just wanted to tell you to save my spot."