Jim, a traveling salesman goes to a hotel late in the night and asks the clerk for a single room. As the clerk is completing the formalities, Jim looks around and finds a stunning blonde seated in the lobby. He tells the clerk to excuse him for a moment and heads to the lobby. He is back in a minute with the blonde on his arm.
"Fancy banging into my wife here," he tells the clerk. "Guess I'll need a double room after all."
Next morning, when Jim comes to settle his bill, he finds the amount to be $4200. "What the hell is this?" he yells at the clerk. "I have been here for just a night!"
"You are right, Sir," says the clerk, "but your wife has been here for 4 weeks."
#joke #blonde
Joke | Source: Really Funny Jokes - Really Funny jokes, adult jokes, Good jokes, short funny jokes, teacher jokes, affair jokes, kids jokes, doctor jokes, funny pictures

A man and his wife had been stranded on a deserted island for many years. The morning following a bad storm, a new guy washes up on the shore.

The new guy and the wife are VERY attracted to each other right away, but they realize that certain protocols will have to be observed. The husband, oblivious to the new chemistry floating around, is very glad to see the second man there.

The new man is only too happy to help, and in fact volunteers to do the first shift. He climbs up the tall tower and stands watch, scanning the ocean horizon for any ships. Soon the husband and wife start placing stones in a circle in order to make a fire to cook supper. The new man yells down: “Hey, no screwing!”

They look at each other and yell back: “We're not screwing!”

A few minutes later, they start to put driftwood into the stone circle. Again the new man yells down: “Heeey, no screwing!”

Again they yell back, “We're not screwing!”

Later they are putting palm leaves on the roof of the shack to patch leaks. Once again the new man yells down from high above:
“Hey, I said no screwing!!”

They yell back, “And we said we're not screwing!!”

Finally the shift is over and the new man climbs down from the tower and the husband starts to climb up. By the time he gets half-way up, his wife and the new man are already screwing their brains out. Once at the top, the husband turns around and looks down and says to himself:
“Son-of-a-gun. From up here it DOES look like they're screwing.

Q: Why do little melons have to have big weddings?

A: Because they "cantaloupe."

After drinking, Men talk unnecessarily, Become emotional,
Drive badly, Stop thinking, Fight for nothing
Women can do all these without drinking!

Funny Photo of the day - PLAYING WITH HIMSELF PLAYING WITH HIMSELF | Source : Very Demotivational - Posters That Demotivate Us

You take a fishing pole to Sea World.

The hood and one door are a different color from the rest of your car.

You've ever filled your deer tag on the golf course.

You've ever shot somebody over a mall parking space.

Santa Claus refuses to let your kids sit in his lap.

Your toilet paper has page numbers on it.

You think mud rasslin' should be an Olympic sport.

The receptionist checks the rat traps at your place of business.

There are more fish on your wall than pictures.

The last job I had, I had to wear this badge around my neck all day -- like, a laminated badge. Its like a backstage pass to the crappiest concert ever invented.
#joke #short
Joke | Source: Comedy Central: Jokes - Jokes provided daily from Comedy Central's archive. 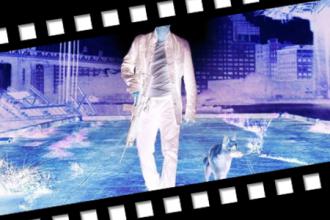 Chuck Norris was in the amazon...

Chuck Norris was in the amazon one day when he was bit by a vicious snake. After 3 days of pain and suffering... the snake died.
#joke #short #chucknorris
Joke | Old joke from joke of the day archives - Check out other old jokes Sunday, 11 December 2011

So Moses is up on Mount Sinai and he says to God, "God, do I have a pounding headache!"
And God says, "Here, take these two tablets."

What does that one do?

A man entered a pet shop, wanting to buy a parrot. The shop owner pointed out three identical parrots on a perch and said, "The parrot to the left costs 500 dollars."

"Why does that parrot cost so much?" the man wondered.

The owner replied, "Well, it knows how to use a computer."

The man asked about the next parrot on the perch.

"That one costs 1,000 dollars because it can do everything the other parrot can do, plus it knows how to use the UNIX operating system." Naturally, the startled customer asked about the third parrot.

"And what does that one do?" the man asked.

The owner replied, "To be honest, I've never seen him do a thing, but the other two call him boss!"