A priest decides one day to visit one of his elderly parishoners, Mrs. Smith. He rings the door bell and Mrs. Smith appears. "Good day, Mrs. Smith. I just thought I would drop by and see how you are doing."

"Oh just fine Father, come on in, and we'll have some tea."

While sitting a the coffee table, the priest notices a bowl of almonds on the table. "Mind if I have one?" the priest says.

After a few hours, the priest looks at his watch and alarmed at how long he has been visting, says to Mrs. Smith, "Oh my goodness, look at the time. I must be going. Oh, but dear me, I have eaten all your alomonds. I'll have to replace them the next time I visit."

Mrs. Smith replied, "Oh don't bother Father. Ever since I lost all my teeth, it's all I can do just to lick the chocolate off them."

Two hunters went moose hunting every winter without success. Finally, they came up with a foolproof plan. They got a very authentic female moose costume and learned the mating call of a female moose. The plan was to hide in the costume, lure the bull, then come out of the costume and shoot the bull. They set themselves up on the edge of a clearing, donned their costume and began to give the moose love call. Before long, their call was answered as a bull came crashing out of the forest and into the clearing. When the bull was close enough, the guy in front said, "Okay, let's get out and get him." After a moment that seemed like an eternity, the guy in the back shouted, "The zipper is stuck! What are we going to do?" The guy in the front says, "Well, I'm going to start nibbling grass, but you'd better brace yourself."
#joke
Joke | Source: Jokes of the day - Taken from Bartender's guide to Jokes, Drinks, and Poker - once good site, no longer active.

She doesnt know how to use anything electronic. Anything that requires technology she doesnt know how to use -- except the e-mail forward. I dont know what it is about moms and the e-mail forward, but they get it immediately. My mom cant even use the dishwasher, yet every morning I have 75 new e-mails, all from my mom. Oh great, what cat dressed like a human today? What couldnt wait til never?
#joke
Joke | Source: Comedy Central: Jokes - Jokes provided daily from Comedy Central's archive. Little Johnny returns from school and says he got an "F" in arithmetic.
"Why?" asks the father.
"The teacher asked 'How much is 2x3?' I said 6.'"
"But that's right!" The father replied.
"Then she asked me 'How much is 3x2?'"
"What the heck's the stupid difference?" asked the father.
"That's what I said!"

What Men Call their Women

What's in a name? Apparently, a lot more than you (or I) ever thought there was. Here's what his pet name for you really means…..

Darling — Depends on how he says it. If he stresses the first syllable, then he's probably done something wrong or wants money.

Dear — Probably a leftover from his parents. Expect him to wear woolly cardigans, smoke a pipe and prefer a mug of Ovaltine to lager.

Sweetheart — If it's said patronizingly, it's not so sweet. But when uttered in earnest, it may send your own sweet heart aflutter.

Babe — Not to be confused with the film of the same name. Check for flares or signs that he's a 70s throwback. He's a bit of a medallion man. Chances are he's got his initials on his chunky ring. Leave immediately if he tries to sell you a second-hand car.

Baby doll — This type of man will probably require you to wear transparent frilly nighties even in the dead of winter. He doesn't want you to grow up, and obviously can't deal with real women.

Princess — Never trust a man who calls you princess. You may think you're being treated like royalty, but beware of Prince Charmings – they may be secretly plotting your over- throw.

Sexy — Fine if you're sexy. If you're not, who cares? He probably thinks you are anyway!!

My girlfriend — He's honest, open and probably glad to have you around. The next thing you know he'll be using your name!

My other half — You complete the set – he's only half a man without you. But it may make you feel as though you are losing your identity somewhere.

The missus — See The Wife.

My significant other — He's even more right on. Probably thinks it's cruel to eat tofu and that trees need their own space.

She who must be obeyed — He thinks you're a nag, but probably doesn't lift a finger around the house. 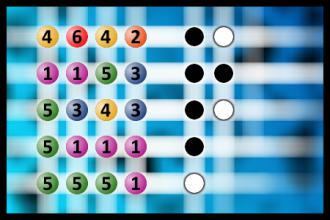 Chuck Norris does, in fact, live in a round house.
#joke #short #chucknorris
Joke | Old joke from joke of the day archives - Check out other old jokes Tuesday, 10 May 2011

A local business was looking f...

A local business was looking for office help. They put a sign in the window saying:
"HELP WANTED. Must be able to type, must be good with a computer and must be bilingual. We are an Equal Opportunity Employer."
A short time afterwards, a dog trotted up to the window, saw the sign and went inside. He looked at the receptionist and wagged his tail, then walked over to the sign, looked at it and whined.
Getting the idea, the receptionist got the office manager. The office manager looked at the dog and was surprised, to say the least. However, the dog looked determined, so he led him into the office. Inside, the dog jumped up on the chair and stared at the manager.
The manager said, "I can't hire you. The sign says you have to be able to type."
The dog jumped down, went to the typewriter and proceeded to type out a perfect letter. He took out the page and trotted over to the manager and gave it to him, then jumped back on the chair.
The manager was stunned, but then told the dog, "The sign says you have to be good with a computer."
The dog jumped down again and went to the computer. The dog proceeded to demonstrate his expertise with various programs and produced a sample spreadsheet and database and presented them to the manager.
By this time the manager was totally dumbfounded! He looked at the dog and said, "I realize that you are a very intelligent dog and have some interesting abilities. However, I still can't give you the job."
The dog jumped down and went to a copy of the sign and put his paw on the part about being an Equal Opportunity Employer.
The manager said, "Yes, but the sign also says that you have to be bilingual."
The dog looked at him straight in the face and said, "Meow."
#joke
Joke | Old joke from joke of the day archives - Check out other old jokes Thursday, 12 November 2009

Macgyver can build an airplane...

Macgyver can build an airplane out of gum and paper clips, but Chuck Norris can kill him and take it.
#joke #short #chucknorris
Joke | Old joke from joke of the day archives - Check out other old jokes Wednesday, 15 June 2011

All the British fans start singing to the German fans, If you won the war, stand up! Right, I think this is the greatest thing Ive ever heard at a sporting event because theres no snappy comeback for that, is there?
#joke #short
Joke | Old joke from joke of the day archives - Check out other old jokes Tuesday, 15 June 2010

My dad is retired now, and he moved to Florida. And its really great to be able to finally go down and visit him now that hes finally able to do those things in life that hes always wanted to do, which apparently is start drinking at noon and then head on out to buy me ugly shirts.
#joke #short
Joke | Old joke from joke of the day archives - Check out other old jokes Wednesday, 15 June 2011

* If Oracle made toasters... They'd claim their toaster was compatible with all brands and styles of bread, but when you got it home you'd discover the Bagel Engine was still in development, the Croissant Extension was three years away and that, indeed, the whole appliance was just blowing smoke!

* If HP made toasters... They would market the Reverse Toaster, which takes in toast and gives you regular bread!

* If IBM made toasters... They would want one big toaster where people bring bread to be submitted for overnight toasting. IBM would claim a worldwide market for five, maybe six toasters.

* If Xerox made toasters... You could toast one-sided or double-sided. Successive slices would get lighter and lighter. The toaster would jam your bread for you.

* If Circuit City made toasters... The staff would sell you a toaster, but not know anything about it. Or you could buy all the parts to build your own toaster.

* If Thinking Machines made toasters... You would be able to toast 64,000 pieces of bread at the same time.

* If Cray made toasters... They would cost $16 million but would be faster than any other single-slice toaster in the world.

* If the Rand Corporation made toasters... It would be a large, perfectly smooth and seamless black cube. Every morning there would be a piece of toast on top of it. Their service department would have an unlisted phone number and the blueprints for the box would be highly classified government documents. The X-Files would have an episode about it.

* If the NSA made toasters... Your toaster would have a secret trap door that only the NSA could access in case they needed to get at your toast for reasons of national security.

* If Sony made toasters... The ToastMan, which would be barely larger than the single piece of bread it is meant to toast, can be conveniently attached to your belt.

* If Timex made toasters... They would be cheap and small quartz-crystal wrist toasters that take a licking and keep on toasting.

* If Fisher Price made toasters... 'Baby's First Toaster' would have a hand-crank that you turn to toast the bread that pops up like a jack-in-the-box.

* If Microsoft made toasters... Every time you bought a loaf of bread, you would have to buy a toaster. You wouldn't have to take the toaster, but you'd still have to pay for it anyway. Toaster '02 would weigh 15,000 pounds (requiring a reinforced steel countertop), draw enough electricity to power a small city, take up 95% of the space in your kitchen, would claim to be the first toaster that lets you control how light or dark you want your toast to be, and would secretly interrogate your other appliances to find out who made them. Everyone would hate Microsoft toasters, but nonetheless would buy them since most of the good bread only works with their toasters.

* If Apple made toasters... It would do everything the Microsoft toaster does, but five years earlier and ten times better!