A woman in a hot air balloon realized she was lost.
She reduced altitude and spotted a man below. She descended a bit more and shouted: 'Excuse me, can you help me? I promised a friend I would meet him an hour ago but I don't know where I am..'
The man below replied, 'You're in a hot air balloon hovering approximately 30 feet above the ground. You're between 40 and 41 degrees north latitude and between 59 and 60 degrees west longitude.'
'You must be an Engineer,' said the balloonist.
'I am,' replied the man, 'how did you know?'
'Well,' answered the balloonist, 'everything you have told me is probably technically correct, but I've no idea what to make of your information and the fact is, I'm still lost. Frankly, you've not been much help at all. If anything, you've delayed my trip by your talk.'
The man below responded, 'You must be in Management.'
'I am,' replied the balloonist, 'but how did you know?'
'Well,' said the man, 'you don't know where you are or where you're going. You have risen to where you are, due to a large quantity of hot air. You made a promise, which you've no idea how to keep, and you expect people beneath you to solve your problems. The fact is you are in exactly the same position you were in before we met, but now, somehow, it's my f**king fault.'

BBQ tip - Why You Should Spiral-Cut Your Wiener - link to page video is posted initially.

A very successful businessman had a meeting with his new son-in-law. “I love my daughter, and now I welcome you into the family,” said the man. “To show you how much we care for you, I'm making you a 50-50 partner in my business. All you have to do is go to the factory every day and learn the operations.”

The son-in-law interrupted, “I hate factories. I can't stand the noise.”

“I see,” replied the father-in-law. “Well, then you'll work in the office and take charge of some of the operations.”

“I hate office work,” said the son-on-law. “I can't stand being stuck behind a desk all day.”

“Wait a minute,” said the father-in-law. “I just make you half-owner of a moneymaking organization, but you don't like factories and won't work in a office. What am I going to do with you?”

A man is surprised to receives...

A man is surprised to receives a call from his doctor.
The doctor says, "I'm sorry, but I have some bad news and some worse news."
"Well, alright, give me the bad news first," said the man.
"Well," said the doctor, "The bad news is that you only have 24 hours to live."
"Holy Cow! That is some bad news!" the man exclaimed. "What news could be worse than that?" he asked.
"The worse news is that I have been trying to reach you since yesterday."

Funny Photo of the day - wen u c et wen u c et | Source : This is Photobomb - Photojackers of the World Unite!

Holy Family in a Plane

A Sunday school teacher asked her students to draw a picture of Jesus' family. After collecting the drawings, she noticed that one little boy's drawing depicted an airplane with four heads sticking out of the windows. "I see you drew three heads to show Joseph, Mary and Jesus," she said to the boy. "But who does the fourth head belong to?"
The boy replied, "That's Pontius the pilot."

ADULT: A person who has stopped growing at both ends and is now growing in the middle.

BEAUTY PARLOR: A place where women curl up and dye.

CANNIBAL: Someone who is fed up with people.

CHICKENS: The only creatures you eat before they are born and after they are dead.

COMMITTEE: A body that keeps minutes and wastes hours.

DUST: Mud with the juice squeezed out.

EGOTIST: Someone who is usually me-deep in conversation.

GOSSIP: A person who will never tell a lie if the truth will do more damage.

INFLATION: Cutting money in half without damaging the paper.

MOSQUITO: An insect that makes you like flies better.

RAISIN: Grape with a sunburn.

SECRET: Something you tell to one person at a time.

TOOTHACHE: The pain that drives you to extraction.

TOMORROW: One of the greatest labor saving devices of today.

WRINKLES: Something other people have. You have character lines. 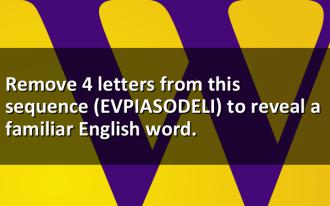 "My wife and I just got into a knock down, drag out fight!"

Customer: When it was all over, she came crawling to me on her hands and knees!

Bartender: Wow! What did she say?

Customer: She said, "come out from under that bed right now you coward or I'll kick your butt again!!"

You ever have the police follow you so long, you get suspicious of your damn self? Maybe I did kill them people. Im a go ahead and turn myself in.
#joke #short
Joke | Source: Comedy Central: Jokes - Jokes provided daily from Comedy Central's archive.

Chuck Norris once broke the la...

Chuck Norris once broke the land speed record on a bicycle that was missing its chain and the back tire.
#joke #short #chucknorris
Joke | Old joke from joke of the day archives - Check out other old jokes Thursday, 24 November 2011

A married couple were asleep when the phone rang at 2 in the morning, thewife (undoubtedly blonde), picked up the phone, listened a moment andsaid, "How should I know, that's 200 miles from here?" and hung up.

The husband said, "Who was that?" The wife said, "I don't know, someyoung woman wanting to know 'if the coast is clear."

After being with her all evening, the man couldn't take another minute with his blind date. Earlier, he had secretly arranged to have a friend call him to the phone so he would have an excuse to leave if something like this happened.
When he returned to the table, he lowered his eyes, put on a grim expression and said, "I have some bad news. My grandfather just died."
"Thank heavens," his date replied. "If yours hadn't, mine would have had to!"

As the incidence and prevalence of Internet Addiction Disorder (IAD) has been increasing exponentially, a support group. The Internet Addiction Support Group (IASG) has been established. Below are the official criteria for the diagnosis of IAD and subscription information for the IASG.

A maladaptive pattern of Internet use, leading to clinically significant impairment or distress as manifested by three (or more) of the following, occurring at any time in the same 12-month period:

(I) tolerance, as defined by either of the following:

(II) withdrawal, as manifested by either of the following

(A) the characteristic withdrawal syndrome

(1) Cessation of (or reduction) in Internet use that has been heavy and prolonged.

(2) Two (or more) of the following, developing within several days to a month after Criterion 1:

(c) obsessive thinking about what is happening on Internet

(d) fantasies or dreams about Internet

(e) voluntary or involuntary typing movements of the fingers

(3) The symptoms in Criterion B cause distress or impairment in social, occupational or other important other area of functioning

(B) Use of Internet or a similar on-line service is engaged in to relieve or avoid withdrawal symptoms.

(VI) Important social, occupational, or recreational activities are given up or reduced because of Internet use.

(VII) Internet use is continued despite knowledge of having a persistent or recurrent physical, social, occupational, or psychological problem that is likely to been caused or exacerbated by Internet use (sleep deprivation, marital difficulties, lateness for early morning appointments, neglect of occupational duties, or feelings of abandonment in significant others)

I used to be jealous; Im not jealous anymore. And a miracle happened to me, because if youre jealous, its a cancer, its a plague on your spirit, it really is. And I actually cured jealousy in a very weird way -- I cured it with mathematics. And Im not a math person at all, but Ive been with my wife for about seven years, so we have had sex probably, Id like to think, like, 9 million times or, at least, 1,500. So, the way I figured it, if she goes out and screws some other guy once -- Im still winning.
#joke
Joke | Old joke from joke of the day archives - Check out other old jokes Sunday, 11 July 2010

Be careful what you wear (or don't wear), when working under
your vehicle...especially in public.
From Sydney Morning Australia comes this story of a central west
couple who drove their car to K-Mart only to have their car
break down in the parking lot.
The man told his wife to carry on with the shopping while he
fixed the car their in the parking lot. The wife returned later
to see a small group of people near the car. On closer
inspection she saw a pair of male legs from under the chassis.
Altough the man was in shorts his lack of underpants turned
private parts into glaringly public ones.
Unable to stand the embarrassment she dutifully stepped forward,
quickly put her hand up his shorts and tucked everything back
into place. On regaining her feet, she looked across the hood
and found herself staring at her husband who was standing idly
by.

A kindergarten teacher was observing her classroom of children while they drew. She would occasionally walk around to see each child's artwork. As she got to one little girl who was working diligently, she asked what the drawing was.
The girl replied, "I'm drawing God." The teacher paused and said, "But no one knows what God looks like."
Without missing a beat, or looking up from her drawing the girl replied, "They will in a minute."