“To make sure cargo trucks aren't too heavy, police operate on the principle that where there's a wheel there's a weigh.”

The Death of Black Magic

The wife put down her drink and said..."let the old bastard dig. I had him buried upside down."

I had unintentionally become the center of attraction at the supermarket this afternoon. I was standing in the queue to make payment. When it was my turn to pay, the cashier made the strangest request - he said to me, "Strip down, facing me."

Well, I needed the groceries, so I did as told. But not before I had made a mental note to file a complaint with the management.

There was some screaming and shrieking and I finally realized that he was referring to my credit card.

I have been debarred from entering the supermarket premises.

There was an old priest who got sick of all the people in his parish who kept confessing adultery. One Sunday, from the pulpit, he said, "If I hear one more person confess to adultery, I'll quit!"

Well, everyone liked him, so they came up with a code word. Someone had commiteed adultery would say they had "fallen."

This seemed to satisfy the old priest and things went well, until the priest died at a ripe old age. About a week after the new priest arrived, he visited the Mayor of the town and seemed very concerned.

The priest said, "You have to do something about the sidewalk in town. When people come to the confessional, they keep talking about having fallen."

The Mayor started to laugh, realizing that no one had told the new priest about the code word.

Before the Mayor could explain, the priest shook an accusing finger at the Mayor and said, "I don't know what you're laughing about! Your wife fell three times this week!"


The other day I was eating in an Italian restaurant when I accidentally spilled some spaghetti sauce on my favorite white sweater.
I wasn't too distressed, though, because Mr. Wong down on High Street has been doing my laundry for years, and I knew that he could remove just about any stain and get it out like it'd never been there.
So I took the sweater down to Wong's Laundry and dropped it off; Mr. Wong said he'd probably be able to have it cleaned by Thursday. So on Thursday afternoon after work I stopped by Wong's again.
Mr. Wong looked quite distressed when he saw me. He brought out the sweater and, apologizing profusely, explained that somehow this stain was beyond even his power to expunge.
And sure enough, though fainter than before, there was still a distinct red stain on the sweater. In an attempt to make up for his failure, Mr. Wong offered to send the sweater to his brother across town, who had been in the laundry business for an even longer time, and who might have a clue as to the method of removal of this extraordinarily persistent stain.
The elder Wong brother would rush it through at no extra charge, and should have it looking as white and clean as new by Friday. So on Friday I went back to Wong's to pick up my sweater, but when I arrived, Mr. Wong regretfully informed me that his brother, too, had failed to remove the red blotch. "No charge," said Wong, "but you must take sweater elsewhere to clean.
The Moral: ... Two Wongs cannot make a white."

A man was in the hospital recovering from an operation when

nun walked into his room. She was there to cheer up the

and lame. They start talking and she asks about his life.

talks about his wife and his 13 children.

family. God is very proud of you."

"Jewish!" she replies, "You sex maniac you." 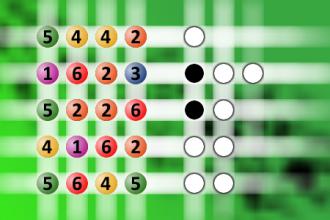 How do you make a pool table laugh?
Put your hand down its pocket and tickle its balls!

As long as there are tests, there will be prayer in public schools.

The old man approached a young...

The old man approached a young stranger in the post office and asked, "Sir, would you address this postcard for me?" The man gladly did so, and then offered to write a short note for the old fellow. Finally the stranger asked, "Now, is there anything else I can do for you?" The old man thought a moment and said, "Yes, at the end could you add, Please excuse the sloppy handwriting."
#joke
Joke | Old joke from joke of the day archives - Check out other old jokes Saturday, 15 October 2011

A man awoke one evening to dis...

A man awoke one evening to discover prowlers in his storage shed. He immediately called 911, gave his address, to report the prowlers and possible burglary. The operator at the other end said "Are they in your house?" He said they were not, only in his storage shed in back of the house. The operator said there were no cars available at that time. He thanked the operator, hung up the phone and counted to 30 and called again. "I just called you about prowlers in my storage shed. Well you do not have to worry, as I just shot them all dead!" Within seconds there were 3 police cars, an ambulance and fire engine at the scene. After capturing the prowlers red-handed, the policeman asked the caller, "I thought you said you had shot them all!" The man answered, "I thought you said there were no police available!"
#joke #policeman
Joke | Old joke from joke of the day archives - Check out other old jokes Friday, 22 October 2010

Q: What is the difference between a blond and a mosquito?

A: A mosquito quits sucking after you hit it.

Q: Why did the blonde quit her job as a restroom attendant?
A: She couldn't figure out how to refill the hand dryer!
#joke #short #blonde
Joke | Old joke from joke of the day archives - Check out other old jokes Saturday, 22 October 2011

A preacher, newly called to a small country town, needed to mail a letter. Passing a young boy on the street, the pastor asked where he could find the post office.
After getting his answer, the minister thanked the boy and said, “If you’ll come to the community church this evening, you can hear me tell everyone how to get to heaven.”
“I don’t know, sir,” the boy replied. “You don’t even know how to get to the post office!”
From "The Book of Church Jokes," published by Barbour Publishing, Inc., Uhrichsville, Ohio. Copyright 2009. Used by permission of Barbour Publishing, Inc.