A Nun was taking a shower one day and she heard the door bell ring, she yelled "Who is it?"
And the person ringing the door bell yelled, "I'm the blind man."
So the Nun got out of the shower and wrapped her hair in a towel, she didn't bother putting a towel around herself because the person behind the door was blind. She opened the door and said, "What do you want?", and the man said, "I'm here to check your blinds."

Epic ping pong final - It takes years of practice to master this move! - link to page video is posted initially.

Martin was working in a small town as branch manager of a financial institution. The rule stipulated that if a branch manager of a small branch needed leave for some reason, he had to inform the nearest city office which would send a substitute to take charge of the town office.

These bear hunters were sittin...

These bear hunters were sitting around the cabin the night before the hunt bragging about their passt hunts.
The cabin boy was listening and went over and said "you guys make it seem pretty hard on capturing a bear".
They all laughed and said "it is hard; do you think you could bag one"?
"I can go out and bag you 2 if you will skin them, and I will bet each of you $100.00.
They agreed and off he went out into the night.
Soon he spotted a big grizzly; he waved his arm and started hollering the big bear started after him and he started running for the shack. When he got close to the shack he started yelling. "Open the door he yelled".
They looked out and saw the bear chasing the boy. Just as he got to the door they opened it and he stepped aside and the bear went in. He slammed the door and locked it and shouted. "OK skin him I'll go and get the other one". Grape man - Is this new super hero or just bad costume? | Source : Jokes of The Day - By Jokes of the day visitor

The crumbling, old church building needed remodeling, so the preacher made an impassioned appeal, looking directly at the richest may in town. At the end of the message, the rich man stood up and announced, "Pastor, I will contribute $1,000."

Just then, plaster fell from the ceiling and struck the rich man on the shoulder. He promptly stood again and shouted, "Pastor, I will increase my donation to $5,000."

Before he could sit back down, plaster fell on him again, and again he virtually screamed, "Pastor, I will double my last pledge."

He sat down, and an larger chunk of plaster fell hitting him on the head. He stood once more and hollered, "Pastor, I will give $20,000!"

Want Me To Paint For You?


A blonde was recently fired from an M&M factory for throwing away Ws and peeling the shells on the candies. Therefore, she needed a new job to support herself. After going around town asking if anyone needed work done, she found a man who needed a painter.
"I'm here for the paint job," she said.
"Alright," said the man. "Here is the paint and your brush. I want you to paint my porch behind the house."
The blonde immediately went to work painting. Within an hour, she was done and decided to put on a second coating.
After she finished, she returned to the man for her pay. She said with satisfaction, "I not only completed the job, but I even put on two coats of paint! By the way, that isn't a porsche out back. It's a new BMW. 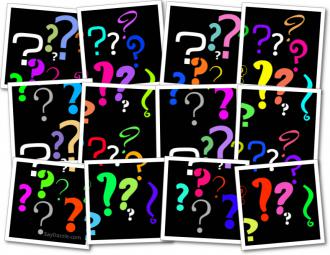 I always follow you around, everywhere you go at night. I look very bright to people, but I can make the sun dark. I can be in many different forms and shapes. What am I?
CHECK ANSWER
Brain Teasers, puzzles, riddles, mathematical problems, mastermind, cinemania...

A young couple are on their way to Las Vegas to get married.

Before getting there, the girl said to the guy that she had a confession to make. The reason that they had not been intimate was because she was very flat-chested. If he wished to cancel the wedding, it would be okay with her.

The guy thought about it for a while and said he did not mind if she was flat, and sex is not the most important thing in a marriage.

Several miles down the road, the guy turned to the girl and said that he also wanted to make a confession. He said that below his waist he was just like a baby, and if the girl wished to cancel tile wedding, it'd be fine by him.

The girl thought about it for a while and said that she did not mind and she also believed there were other things far more important in a marriage than sex. Both were happy that they'd been honest with each other.

They went on to Vegas and got married. On the wedding night the girl took off her clothes and she was as flat as a washboard. Finally, the guy took off his clothes and one look at the guy's naked body made the girl faint and fall to the floor.

After she came to, the guy asked,

'I told you before we got married, why did you still faint?'

'You told me it was just like a baby.'