A dentist noticed that his nex...

A dentist noticed that his next patient, a little old lady, was nervous so he decided to tell her a little joke as he put his gloves.
"Do you know how they make these gloves?" he asked.
"No, I don't."
"Well," he spoofed, "there's a building in Mexico with a big tank of latex and workers of all hand sizes walk up to the tank dip in their hands, let them dry, then peel off the gloves and throw them into boxes of the right size."
She didn't crack a smile.
"Oh, well. I tried," he thought.
But five minutes later, during a delicate portion of the procedure, she burst out laughing.
"What's so funny?" he asked.
"I was just envisioning how condoms are made!"

A wild-eyed man, dressed in a Napoleonic costume and hiding his right hand inside his coat, entered the psychiatrist's office and nervously exclaimed, "Doctor, I need your help right away."

"I can see that," retorted the doctor. "Lie down on that couch, and tell me your problem."

"I don't have any problem," the man snapped. "In fact, as Emperor of France, I have everything I could possibly want: money, women, power--everything! But I'm afriad my wife, Josephine, is in deep mental trouble."

"I see," said the psychiatrist, humoring his distraught patient. "And what seems to be her main problem?"

"For some strange reason," answered the unhappy man, "she thinks she's Mrs. Schwartz."

Best Fails of the Week 1 November 2014 - link to page video is posted initially.

Two rednecks go on a fishing trip. They rent all the equipment - the reels, the rods, the wading suits, the rowboat, the car, and even a cabin in the woods. I mean they spend a fortune!
The first day they go fishing, but they don't catch anything. The same thing happens on the second day, and on the third day. It goes on like this until finally, on the last day of their vacation, one of the men catches a fish.
As they're driving home they're really depressed. One guy turns to the other and says, "Do you realize that this one lousy fish we caught cost us fifteen hundred bucks?"
The other guy says, "Wow! Then it's a good thing we didn't catch any more!"

Mix Reese Pieces, Skittles and M&Ms into one big bowl.
#joke #short #aprilfoolsday #prank
Joke | Source: Jokes of The Day - By Jokes of the day visitor Elephant Baby - This Baby Elephant’s Day at the Beach Will Bring a Smile to Your Face | Source : Jokes of The Day - By Jokes of the day visitor

A Jewish man goes and visits a Rabbi about a personal concern of his.
"Rabbi," he says, "I am so upset about my son, I don't know what to do. I raised him a good Jew, taught him the Torah, and instructed him about the Sabbath. Well, I just learned at this last Passover that he converted to Catholicism. Please tell me what I should do to reason with him!"The Rabbi answers: "Funny you should mention this. The exact same thing happened to my son. I taught him everything I know to make him follow in my footsteps and become a good Rabbi like me, and the next thing I know, he converted to Catholicism and became a Priest! I truly don't know what to tell you: maybe we should ask Yahweh for some insights."
To two men started praying: "Yahweh, G-d almighty, Creator of the Universe, please come to our rescue. Our firstborn sons have converted to Catholicism! What should we do?"
A thundering voice responds: "WELL, TELL ME ABOUT IT!!"
#joke
Joke | Source: Belief net - Joke of the day, features on religion, spirituality, faith 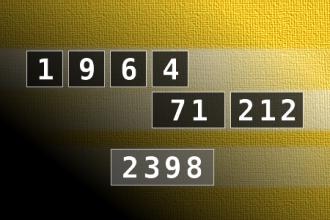 Why is 6 afraid of 7?
Because 7,8,9.
#joke #short
Joke | Source: A joke a day - Free Jokes of the Day Clean Funny Jokes via Email, Humor and Entertainment

After working most of her life...

After working most of her life Grandma finally retired. At her nextcheckup, the new doctor told her to bring a list of all the medicinesthat had been prescribed for her.
As the young doctor was looking through these, his eyes grew wide as herealized she had a prescription for birth control pills. "Mrs. Smith, doyou realize these are BIRTH CONTROL pills?"
Yes, they help me sleep at night. "
"Mrs. Smith, I assure you there is absolutely NOTHING in thesethat could possibly help you sleep!
She reached out and patted the young Doctor's knee. "Yes, dear,I knowthat. But every morning, I grind one up and mix it in the glass oforange juice that my 16 year old granddaughter drinks . . . and believeme, it helps me sleep at night. "
You gotta love Grandmas!

The old priest suggests, "Cross you arms over your chest, and rub your chin with one hand." The new priest tries this.

The old priest suggests, "Try saying things like, 'I see, yes, go on, and I understand. How did you feel about that?'"

The new priest says those things.

The old priest says, "Now, don't you think that's a little better than slapping your knee and saying 'No kidding? What happened next?'"

Come On, Ride the Train

An old man goes into Victoria...

An old man goes into Victoria's Secret and tells the sales-person behind the counter he needs a present for his wife. "See," explains the man, "It is my fiftieth wedding anniversary and I would like to get something pretty to surprise the little lady, if you know what I mean." When he gets home, his wife asks with a scowl on her face, "Where have you been?" "Surprise," says the old man and hands her a sexy tiny teddy. The wife rips it from his hand and takes it to the bathroom to try it on. She struggles to make it fit, but it is two sizes too small. She take a long time in the bathroom and hopes her husband will lose interest and fall asleep because it is getting late into the evening. Finally she emerges from the bathroom with all the lights out. She is completely nude and pretends to model it in front of him. Her husband, still sitting up, squinting to try and see finally says, "For as much money I spent on it, they could of at least ironed out the wrinkles."
#joke
Joke | Source: Laugh Factory Network - Watch our huge library of the best stand-up comedy videos, get information on our stand-up comedians, read our joke of the day

“The bank robber looked so peaceful and innocent lying there under his big fluffy blanket. Just goes to show you, you can't judge a crook by his cover.”

Working people frequently ask retired people what they do to make their days interesting.

Well, for example, the other day, Mary my wife and I went into town and visited a shop. We were only in there for about 5 minutes. When we came out, there was a cop writing out a parking ticket.

We went up to him and I said, 'Come on, man, how about giving a senior citizen a break?'
He ignored us and continued writing the ticket. I called him a dumb ass. He glared at me and started writing another ticket for having worn-out tires.
So Mary called him a shit head.  He finished the second ticket and put it on the windshield with the first.
Then he started writing a third ticket.
This went on for about 20 minutes.
The more we abused him, the more tickets he wrote.

Just then our bus arrived, and we got on it and went home. We try to have a little fun each day now that we're retired. It's important at our age.

Hes like, Hey, man, where are you from? So I told him, Im from Queens, New York. And then hes like, No, I mean where are you really from? Which, for those of you who dont know, thats code for, No, I mean, why arent you white?
#joke #short
Joke | Old joke from joke of the day archives - Check out other old jokes Monday, 08 November 2010

The original title for Star Wa...