Need to be dismissed

A man who was chosen for jury duty really wanted to be dismissed from serving. He tried every excuse he could think of but none of them worked. On the day of the trial, he decided to give it one more shot. As the trial was about to begin, he asked if he could approach the bench. "Your Honor," he said, "I must be excused from this trial because I am prejudiced against the defendant. I took one look at the man in the blue suit with those beady eyes and that dishonest face and I said 'He's a crook! He's guilty!' So, your Honor, I cannot possibly stay on this jury!"

With a tired annoyance the judge replied: "Get back in the jury box, you fool. That man is the defendant's lawyer."

Mrs. Rosen is having her house

Mrs. Rosen is having her house painted, and her husband comes home from work and leans against the freshly painted wall.
The next day, she says to the painter, "You want to see where my husband put his hand last night?"
He sighs and says, "Look, lady, I got a tough day's work ahead of me. Why don't you just make us a cup of tea?"

While carpenters were working outside the old house I had just bought, I busied myself with indoor cleaning.

I had just finished washing the floor when one of the workmen asked to use the bathroom. With dismay, I looked from his muddy boots to my newly-scrubbed floors.

"Just a minute," I said, thinking of a quick solution. "I'll put down some newspapers for you."

7. Kid asks for new bike, gets pack of smokes
6. Along with presents, Santa leaves hefty bill for shipping and handling.
5. By the time he gets to your house, all he has left is foam packing.
4. Christmas day, your kid wakes up with a Reindeer head in his bed.
3. Instead of "Naughty" or "Nice", Santa has him on the stupid list
2. Labels on all your kid's toys read "Straight from Craptown."
1. Four words: "Off my lap, Tubby!"

Funny Photo of the day - Toilets in movie theatre in Switzerland Toilets in movie theatre in Switzerland | Source : Jokes of The Day - By Jokes of the day visitor

Honey, What Did the Doctor Say?

A middle aged man goes into the doctor's office for a check-up with a litany of complaints.
The doctor speaks to the man’s wife alone and says, "There is nothing the matter with your husband. If you make a couple of meals for him a day, let him watch his sports. Do not complain at him too much and require him to listen. Limit his exposure to in-laws and make love to him once a week. Then, he’ll probably live another 20 years."
She returns to her husband’s side in the waiting room. He asks, "What did the doctor tell you?"
"You are going to be dying soon, my dear."
- Joke shared by Beliefnet member zenman1
#joke #doctor
Joke | Source: Belief net - Joke of the day, features on religion, spirituality, faith

Star Wars factoid: Back in col

Star Wars factoid: Back in college, he worked in the Imperial Pub, and was known as Darth Waiter.
#joke #short
Joke | Source: Pun Gents - Daily Jokes, One-liners, Groaners, Puns of the day :: Puns on Demand :: Punshine Girls and Boys! 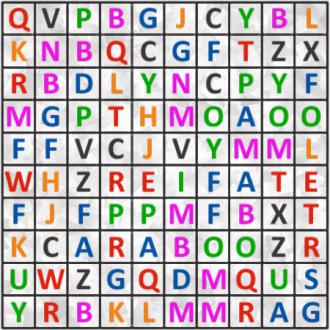 Find the first and the last name of a famous person. Text may go in all 8 directions. Length of words in solution: 6,5.
CHECK ANSWER
Brain Teasers, puzzles, riddles, mathematical problems, mastermind, cinemania...

A couple is in bed sleeping wh...

A couple is in bed sleeping when there's a rat-a-tat-tat on the door.
The husband rolls over and looks at the clock, and it's half past 3 in the morning.” I’m not getting out of bed at this time," he thinks, and rolls over. Then, a louder knock follows. So he drags himself out of bed, goes downstairs, opens the door, and there's a man standing there. It didn't take the homeowner long to realize the man was drunk.
"Hi there," slurs the stranger, "Can you give me a push?" "No, get lost. It's half past three and I was in bed," says the man as he slams the door. He goes back up to bed and tell his wife what happened and she says, "That wasn't very nice of you. Remember that night we broke down in the pouring rain on the way to pick the kids up from the baby-sitter and you had to knock on that man's house to get us started again? What would have happened if he'd told us to get lost?"
"But the guy was drunk," says the husband.
"It doesn't matter," says the wife.” He needs our help and it would be the Christian thing to help him." So the husband gets out of bed again, gets dressed, and goes downstairs.
He opens the door, and not being able to see the stranger anywhere,
He shouts, "Hey, do you still want a push?"
And he hears a voice cry out, "Yeah, please."
So, still being unable to see the stranger he shouts, "Where are you?" The drunk replies, "Over here, on the swing."

A man and his wife were drivin

A man and his wife were driving through country on his way from New York toCalifornia.
Looking at his fuel gauge, he decided to stop at the next gasoline station andfill up. About 15 minutes later, he spots a Mobil station and pulls over to thehigh octane pump.
"What can I do for ya'll?" asks the attendant. "Fill 'er up with high test,"replies the driver. While the attendant is filling up the tank, he's lookingthe car up and down.
"What kinda car is this?" he asks. "I never seen one like it before."
"Well," responds the driver, his chest swelling up with pride, "This, my boy isa 1999 Cadillac DeVille."
"What all's it got in it?" asks the attendant.
"Well," says the driver, "It has everything. It's loaded with power steering,power seats, power sun roof, power mirrors, AM/FM radio with a 10 deck CDplayer in the trunk with 100 watts per channel, 8 speaker stereo, rack andpinion steering, disk brakes all around, leather interior, digital instrumentpackage, and best of all, a 8.8 liter V12 engine."
"Wow," says the attendant, "That's really something!"
"How much do I owe you for the gasoline?" asks the driver.
"That'll be $30.17," says the attendant.
The driver pulls out his money clip and peels off a $20 and a $10. He goes intohis other pocket and pulls out a handful of change. Mixed up with the changeare a few golf tees.
"What are those little wooden things?" asks the attendant.
"That's what I put my balls on when I drive," says the driver.
"Wow," says the attendant, "Those Cadillac people think of everything!"

With yet another young man in her life Elizabeth Taylor decided that in her advancing years she needed to tighten up her vaginal area.

She put her trust in her plastic surgeon of 30 years standing, the one who had carried out her face-lifts, boob jobs and ass-lifts.

Sworn to secrecy, he agreed that no-one but him would ever know. He carried out the delicate operation, carefully slicing away strips of the loose folds of skin. It is a long operation!

Liz awakes the next morning to see 3 "get well soon" cards on her bedside table. She is appalled and demands to see the doctor. "No-one but you should know about this! You have let me down",she says.

"Ah" says the doc,"this card is from my wife and I wishing you a speedy recovery."

"The second card is from old Madge the cleaner who has cleaned up after all your previous operations - she is to be trusted."

"What a beautiful thought , from such a humble person -I'm really touched", says Liz. "But who is the 3rd card from?" asks Liz.

"Oh", says the doctor, "that's from Evander Holyfield -- thanking you for his new ears!!!"

Yo momma's so fat, that when

Yo momma's so fat, that when she rubs her thighs together, I smell bacon.
#joke #short
Joke | Source: Laugh Factory Network - Watch our huge library of the best stand-up comedy videos, get information on our stand-up comedians, read our joke of the day

“The girl quit her jo

“The girl quit her job at the doughnut factory because she was fed up with the hole business.”