Spill “milk” all over your kid’s most prized possession. This splatter (which won’t harm your kid’s computer or anything else) is easily made using glue and soap.
#joke #short #aprilfoolsday
Joke | Source: Jokes of The Day - By Jokes of the day visitor

Sleeping Carraige of a Train

A man and a woman who have never met before find themselves in the same sleeping carriage of a train.

After the initial embarrassment, they both manage to get to sleep; the woman on the top bunk, the man on the lower.

In the middle of the night the woman leans over and says, "I'm sorry to bother you, but I'm awfully cold and I was wondering if you could possibly pass me another blanket."

The man leans out and with a glint in his eye said "I've got a better idea ... let's pretend we're married."

"Why not," giggles the woman.

Slalom Skier Starts Race with a Somersault - Unfortunately, it was also the end of men’s slalom race in Méribel, France, for French alpine skier Julien Lizeroux. - link to page video is posted initially.

The elderly couple were visiti

The elderly couple were visiting another pair of oldies one evening. After dinner the ladies were ( as usual) tidying up in the kitchen while the two old chappies chuntered happily together in the sitting room.
The host says, "Oh, we went to a new restaurant the other night...it was quite good, really."
"Interesting," replies the guest. "What's it called?"
"Uuuuuummmmmm, let me see now...mmmm...what do you call that beautiful flower....it comes in many colours...red, pink, yellow....you know the one, has a sweet fragrance, thorns on the stem, etc..."
"Oh, you must mean a rose!"
"Of course!!!......Rose! (calls towards the kitchen) what's the name of the restaurant we went to?"

“After a few beers on

“After a few beers on the plane, Charlie was flying high into the wild brew yonder.” Guitar toilet - for real guitarist | Source : Jokes of The Day - By Jokes of the day visitor

"Why not?" she asked."I'll give you two good reasons," he said. "One, they don't like me, and two, I don't like them."
His mother replied, "I'll give YOU two good reasons why you SHOULD go to church. One, you're 54 years old, and two, you're the pastor!"
#joke
Joke | Source: Belief net - Joke of the day, features on religion, spirituality, faith

A couple, desperate to conceive a child, went to their priest and asked him to pray for them. "I'm going on a sabbatical to Rome," he replied, "and while I'm there, I'll light a candle for you."
When the priest returned three years later, he went to the couple's house and found the wife pregnant, busily attending to two sets of twins. Elated, the priest asked her where her husband was so that he could congratulate him.
"He's gone to Rome, to blow that candle out" came the harried reply.
#joke
Joke | Source: A joke a day - Free Jokes of the Day Clean Funny Jokes via Email, Humor and Entertainment 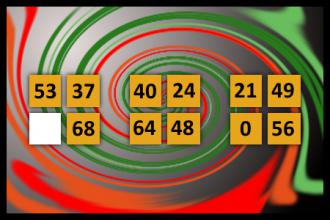 Which number is missing in the white square?

WANTED FOR ATTEMPTED MURDER (the actual AP headline)
Linda Burnett, 23, a resident of San Diego, was visiting her inlaws, and while there went to a nearby supermarket to pick up some groceries. Several people noticed her sitting in her car with the windows rolled up and with her eyes closed, with both hands behind the back of her head. One customer who had been at the store for a while became concerned and walked over to the car. He noticed that Linda's eyes were now open, and she looked very strange. He asked her if she was okay, and Linda replied that she'd been shot in the back of the head, and had been holding her brains in for over an hour. The man called the paramedics, who broke into the car because the doors were locked and Linda refused to remove her hands from her head. When they finally got in, they found that Linda had a wad of bread dough on the back of her head. A Pillsbury biscuit canister had exploded from the heat, making a loud noise that sounded like a gunshot, and the wad of dough hit her in the back of her head.
When she reached back to find out what it was, she felt the dough and thought it was her brains. She initially passed out, but quickly recovered and tried to hold her brains in for over an hour until someone noticed and came to her aid.
And, yes, Linda is a blonde.

Tammy and Ann were shopping. When they started to discuss their home lives, Tammy said, "Seems like all Alfred and I do anymore is fight. I've been so upset I've lost 20 pounds."

"Why don't you just leave him then ?" said Ann.

"Oh ! Not yet." Tammy replied, "I'd like to lose at least another ten to fifteen pounds first."

A man woke up in a hospital bed and called for his doctor. He asked, "Give it to me straight. How long have I got?" The physician replied that he doubted that the man would survive the night.
The man then said, "Call for my lawyer." When the lawyer arrived, the man asked for his physician to stand on one side of the bed, while the lawyer stood on the other. The man then laid back and closed his eyes. When he remained silent for several minutes, the physician asked what he had in mind. The man replied "Jesus died with a thief on either side. I just thought I'd check out the same way."

A nursery school teacher was taking a station

wagon full of kids home one day when a fire truck

zoomed past. Sitting in the front seat of the

fire truck was a Dalmatian dog. The children

"They use him to keep crowds back," said one

A third child brought the argument to a close.

"They use the dogs," she said firmly, "to find

Two men are standing on a golf course. The first one steps up, tees his first ball, and positions himself for a swing. The man lifts his club, swings smoothly down and smacks the ball into the air. It sails off in a nice, long arc, but as it comes down the two men can see that it's heading straight for the water trap.

Just then, a wind picks up, and a lily pad is blown directly into the ball's path. The ball lands on the lily pad, and after a few seconds a frog hops up onto the pad, grabs the ball in its mouth, jumps off the pad and swims for shore.

When the frog reaches dry land, it spits out the ball, and no sooner has it disappeared into the water than a squirrel comes running up to the ball, grabs it in its paws, and scampers off across the grass. But before it can reach the trees, a hawk swoops down out of nowhere, grabs the squirrel in its talons, and begins to climb back up into the sky. Panicked and struggling to get free, the squirrel releases the ball from its paws, and with the altitude and speed gained from the hawk, the ball sails down in a long, clean fall straight into the hole. Hole in one.

Q: What comes with the new Divorced Barbie?

Wife: "I look fat. Can you give me a compliment?"
Husband: "You have perfect eyesight."
#joke #short
Joke | Old joke from joke of the day archives - Check out other old jokes Saturday, 07 June 2014