Every time i lose some weight

Every time i lose some weight i find it back again at the refrigerator.
#joke #short
Joke | Source: Minion Quotes - Despicable Me Minions is a website dedicated to minions. Have a good time reading minion quotes, funny quotes or entertain yourself playing minion games.

A turkey was chatting with a b...

A turkey was chatting with a bull. "I would love to be Able to get to the top of that tree," sighed the turkey, but I haven't got the energy."
"Well, why don't you nibble on my droppings?" replied the bull. "They're packed with nutrients."
The turkey pecked at a lump of dung and found that it gave him enough strength to reach the lowest branch of the tree. The next day, after eating some more dung, he reached the second branch. Finally after a fourth night, there he was proudly perched at the top of the tree. Soon he was spotted by a farmer, who shot the turkey out of the tree.
Moral of the story: Bullsh*t might get you to the top, but it won't keep you there.

Funny video of the day - This we call Supafly Breakdancing

This we call Supafly Breakdancing - If you have ever wondered where the term “supafly” came from. From legend to reality! - link to page video is posted initially.

Jeff beckoned to a salesman in...

Jeff beckoned to a salesman in the department store, pointed to white wool designer dress on a mannequin that Eunice was admiring, and asked, "Excuse me young lady, how much is this dress?"
"That dress is £899.95, Sir," sneered the rather snotty saleswoman.
"£899.95? For £99.95 I could get the same dress at the Bargain store downtown!"
"But sir," said the saleswoman, "You'll find that the dress downtown is recycled wool. This original is 100% pure virgin wool."
Jeff says, "So? For £800 I should care what the lambs do at night?"

George, who was 70-years-old, went for his annual physical. All of his test results came back normal. Dr. Smith said, "George, everything looks great physically. How are you doing mentally and emotionally? Are you at peace with yourself, and do you have a good relationship with God?"
George replied, "God and me are real tight. He knows I have poor eyesight, so he's fixed it so that when I get up in the middle of the night to go to the bathroom, POOF the light goes on when I pee, and then POOF the light goes off when I'm done."
"Wow," commented Dr. Smith, "That's incredible!"
A little later in the day, Dr. Smith called George's wife.
"Thelma," he said, "George is just fine. Physically he's great, but I had to call because I'm in awe of his relationship with God. Is it true that he gets up during the night and, POOF the light goes on in the bathroom, and then POOF it goes off when he's done?"
Thelma exclaimed, "That old fool! He's peeing in the refrigerator again!"
- Joke shared by Beliefnet member Bubbleup
#joke
Joke | Source: Belief net - Joke of the day, features on religion, spirituality, faith

Funny Photo of the day - Special clothing for construction workers Special clothing for construction workers | Source : Jokes of The Day - By Jokes of the day visitor

The term for an unwashed wine 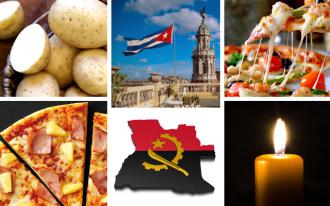 Can you decrypt hidden text?

A magazine reporter is traveling through a rainforest, in search of a fabled cannibalistic tribe. He falls into a trap, goes unconscious and wakes up tied to a stake with a fire burning slowly underneath him.

He cries out for help, and is answered by what is obviously one of the tribesmen, who informs him that he is going to be served as dinner to the leader of the tribe.

"But you don't understand!" he cries, "You can't do this to me! I'm an editor for the New Yorker magazine!"

"Ah," replies the tribesman, "Well soon you will be editor-in-chief!"

A very well-built young lady was lying on her psychiatrist's couch, telling him how frustrated she was.

The shrink thought for a moment and said, "Everyone needs to live a full, satisfying life. Why don't you try nursing?"

The girl thinks about this, then bares one of her large, beautiful breasts, points it at the shrink, and says, "Well, I'll give it a try!"

Q: What's the only difference between ass kissing and brownnosing?

Two cannibals are eating dinner and one says, "I hate my mother-in-law." The other replies, "Well, just eat your noodles, then."
#joke #short
Joke | Source: Laugh Factory Network - Watch our huge library of the best stand-up comedy videos, get information on our stand-up comedians, read our joke of the day

“The purpose of the I

“The purpose of the IT Service Department is to be a customer-server.”

Two campers where hiking in the forest when all of a sudden a bear jumps out of a bush and starts chasing them.
Both campers start running for their lives when one of them stops and starts to put on his running shoes.
His partner says, "What are you doing? You can't outrun a bear!"
His friend replies, "I don't have to outrun the bear, I only have to outrun you!"

I dont like cell phones. Im never sending another text message as long as I live because I dont like a phone that tries to predict the words Im trying to send to people. Cause I move quickly. Last week I ended up sending a text that read, Hey baby, I had a great night. I hope you have a home day. But I meant to text, You should get tested.
#joke
Joke | Old joke from joke of the day archives - Check out other old jokes Monday, 02 August 2010

A: In case they have to draw blood.

Guys have said to me, You know, Jessi, part of what makes you so pretty is you have no idea how pretty you are. And then theyre just like, Enjoy. And Im like, That is not nice. That is like, at best, thats like a backhanded compliment. And at worst, thats just like a forehanded insult because I know that what that sentence really means is, Part of what makes you so pretty is that your self-esteem is so low, its easier for me to f**k you.
#joke
Joke | Old joke from joke of the day archives - Check out other old jokes Tuesday, 02 August 2011

A pregnant woman gets into a c...

A pregnant woman gets into a car accident and falls into a deep coma.

Asleep for nearly six months, she wakes up and sees that she is no longer pregnant. Frantically, she asks the doctor about her baby.

The doctor replies, "Ma'am, you had twins! A boy and a girl. The babies are fine. Your brother came in and named them."

The woman thinks to herself, "Oh no, not my brother -- he's an idiot!"

Expecting the worst, she asks the doctor, "Well, what's the girl's name?"

The new mother thinks, "Wow, that's not a bad name! Guess I was wrong about my brother. I like Denise!"

Then she asks the doctor, "What's the boy's name?"