Did you hear about the orange boxer?
He got beaten to a pulp.
#joke #short
Joke | Source: Jokes of The Day - By Jokes of the day visitor

“Although the maestro broke his wand at a farmer's market recital, he still conducted with a plum.”

Funniest Instant Karma Fails Compilation of 2015 - There is no greater pleasure than seeing someone get their due. Here they are, the best and funniest moments of instant karma in 2015. - link to page video is posted initially.

Police are called to an apartm

Police are called to an apartment and find a woman holding a bloody 5-iron standing over a lifeless man.
The detective asks, "Ma'am, is that your husband?"
"Yes," says the woman.
"Did you hit him with that golf club?"
"Yes, yes, I did."
The woman begins to sob, drops the club, and puts her hands on her face.
"How many times did you hit him?"
"I don't know, five, six, may be seven times .... just put me down for the five iron."

A man phones home from his office and tells his wife: "Something has just come up. I have a chance to go fishing for a week. It's the opportunity of a lifetime. We leave right away. So please pack my clothes, my fishing equipment, and especially my blue.silk pajamas. I'll be home in an hour to pick them up."

He goes home in a hurry and grabs everything and rushes off. A week later he returns. His wife asks: "Did you have a good trip, dear?" He says: "Oh yes, great! But you forgot to pack my blue silk pajamas." His wife smiles and says, "Oh no I didn't. I put them in your tackle box!"

Funny Photo of the day - Relaxing like a boss Relaxing like a boss - Only babies know how confy this is | Source : Jokes of The Day - By Jokes of the day visitor


A passenger train is creeping along, slowly. Finally it creaks to a halt. A passenger sees a conductor walking by outside.
"What's going on?" she yells out the window.
"Cow on the track!" replies the conductor.
Ten minutes later, the train resumes its slow pace.
Within five minutes, however, it stops again.
The woman sees the same conductor walk again.
She leans out the window and yells, "What happened? Did we catch up with the cow again?"

Because I Said So!

After creating heaven and earth, God created Adam and Eve. And the first thing He said to them was, "Don't."
"Don't what?" Adam asked.
"Don't eat the forbidden fruit," God said.
"Forbidden fruit? We got forbidden fruit? Hey, Eve! We got Forbidden Fruit!"
"No way!"
"Yes WAY!"
"Don't eat that fruit!" said God.
"Why?""Because I'm your Creator and I said so!" said God, wondering why he hadn't stopped after making the elephants.
A few minutes later, God saw the kids having an apple break and was angry. "Didn't I tell you not to eat that fruit?" God asked.
"Uh huh," Adam replied.
"Then why did you?"
"I dunno," Eve answered.
"She started it!" Adam said.
"Did Not!"
"DID so!"
"DID NOT!"
Having had it with the two of them, God's punishment was that Adam and Eve should have children of their own.
#joke
Joke | Source: Belief net - Joke of the day, features on religion, spirituality, faith 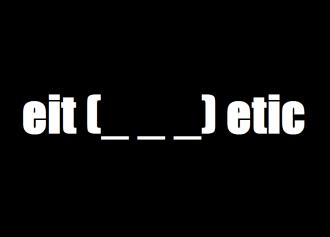 There are two incomplete wor...

There are two incomplete words. Place three (3) letters in bracket so that you can complete the word on the left and begin the word on the right.
CHECK ANSWER
Brain Teasers, puzzles, riddles, mathematical problems, mastermind, cinemania...

What's the emoji for con

A trucker came into a truck stop cafe and placed his order. He said, "Iwant three flat tires, a pair of headlights and a pair of runningboards."
The brand new blonde waitress, not wanting to appear stupid, went to thekitchen and said to the cook, "This guy out there just ordered threeflat tires, a pair of headlights and a pair of running boards. Whatdoes he think this place is ... an auto parts store?"
"No," the cook said. "Three flats tires means three pancakes, a pair ofheadlights is two eggs sunny side up, and running boards are 2 slicescrisp bacon."
"Oh, OK!" said the blonde. She thought about it for a moment and thenspooned up a bowl of beans and gave it to the customer.
The trucker asked, "What are the beans for, Blondie?"
She replied, "I thought while you were waiting for the flat tires,headlights and running boards, you might as well gas up."

With Viagra such a hit, Pfizer is bringing forth

a whole line of drugs oriented towards improving the

performance of men in today's society.

DIRECTRA - A dose of this drug given to men

before leaving on car trips caused 72 percent of them to

stop and ask for directions when they got

lost, compared to a control group where only 0.2

were far more likely to actually finish a household repair

project before starting a new one.

COMPLIMENTRA - In clinical trials, 82 percent of

middle-aged men administered this drug noticed that their

wives had a new hairstyle. Currently being tested to see if

sudden urge to buy their sweeties expensive jewelry and gifts

after taking this drug for only two days. Still to be seen:

whether the drug can be continued for a period longer than

NEGA-VIAGRA - Has the exact opposite effect of Viagra.

NEGA-SPORTAGRA - This drug had the strange effect of making

men want to turn off televised sports and actually converse

with other family members.

and replacing toothpaste caps. Subjects on higher doses were

PRYAGRA - About to fail its clinical trial, this drug gave

LIAGRA - This drug causes men to be less than truthful when

they are asked about their sexual affairs. Will be available

Sex is like snow: you never know how many inches you are going to get or how long it is going to last.
#joke #short
Joke | Source: Laugh Factory Network - Watch our huge library of the best stand-up comedy videos, get information on our stand-up comedians, read our joke of the day

A young woman was preparing for her wedding. She asked her mother to go out and buy a nice long black negligee and carefully place it in her suitcase so it would not wrinkle. Well, Mom forgot until the last minute. So she dashed out and could only find a short pink nighty. She bought it and threw it into the suitcase.
After the wedding the bride and groom enter their hotel room. The groom was a little self-conscious so he asked his new bride to change in the bathroom and promise not to peek while he got ready for bed. While she was in the bathroom, the bride opened her suitcase and saw the negligee her mother had thrown in there. She exclaimed, "Oh no! It's short, pink, and wrinkled!"
Then her groom cried out, "I told you not to peek!"

"Brokeback Mountain" is not ju...

"Brokeback Mountain" is not just a movie. It's also what Chuck Norris calls the pile of dead ninjas in his front yard.
#joke #short #chucknorris
Joke | Old joke from joke of the day archives - Check out other old jokes Sunday, 18 December 2011

An elderly couple is vacationi...

An elderly couple is vacationing in the West. Sam always wanted a pair of authentic cowboy boots. Seeing some on sale one day, he buys them, wears them home, walking proudly. He walks into their room and says to his wife, "Notice anything different, Bessie?"

Bessie looks him over. "Nope."

Sam says excitedly, "Come on, Bessie, take a good look. Notice anything different about me?"

Frustrated, Sam storms off into the bathroom, undresses, and walks back into the room completely naked except for the boots. Again he asks, a little louder this time, "Notice anything different?"

Furious, Sam yells, "And do you know why its hanging down, Bessie? It's hanging down because it's looking at my new boots!"

My grandmother, she passed away at Christmas time. So now, I have this built in sadness, you know, every holiday. Cause Im plagued with the thought of, you know, what she would have given me. What didnt I get to open this year?
#joke #short #christmas
Joke | Old joke from joke of the day archives - Check out other old jokes Sunday, 18 December 2011

Give him an orange

One day in Contract Law class, Professor Jepson asked one of his better students, "Now if you were to give someone an orange, how would you go about it?"

The student replied, "Here's an orange."

The professor was livid. "No! No! Think like a lawyer!" The student then recited, "Okay, I'd tell him, 'I hereby give and convey to you all and singular, my estate and interests, rights, claim, title, calim and advantages of and in, said orange, together with all its rind, juice, pulp, and seeds, and all rights and advantages with full power to bite, cut, freeze and otherwise eat, the same, or give the same away with and without the pulp, juice, rind and seeds, anything herein before or hereinafter or in any deed, or deeds, instruments of whatever nature or kind whatsoever to the contrary in anywise notwithstanding..."