“The plane flight brought my acrophobia to new heights.”

Q. Why do Pagan girls make the best wives?
A. She'll always worship the ground you walk on.
#joke #short
Joke | Source: Belief net - Joke of the day, features on religion, spirituality, faith

Dogs would get kicked out of t

Dogs would get kicked out of the military, for derriere licking off doody.
#joke #short
Joke | Source: Pun Gents - Daily Jokes, One-liners, Groaners, Puns of the day :: Puns on Demand :: Punshine Girls and Boys!

A man walks into a doctor's office. He has a cucumber up his nose, a carrot in his left ear and a banana in his right ear.

"What's the matter with me?" he asks the doctor.

The doctor replies, "You're not eating properly."

#joke #short #doctor
Joke | Source: Jokes - Used to be - Pacific products joke of the day, but site no longer works.


He who shouts the loudest has the floor.
He who walks in another's tracks leaves no footprints.
Hindsight is an exact science.
History is the science of what never happens twice.
History repeats itself. That is one of the things wrong with history.
I disapprove of every conspiracy of which I am not a part.
I have never found, in long experience, that criticism is ever inhibited by ignorance.
I have run out of sick leave, so I'm calling in dead.
I have seen the truth and it makes no sense.
I have yet to see any problem, however complicated, which when you looked at it in the right way, did not become still more complicated. 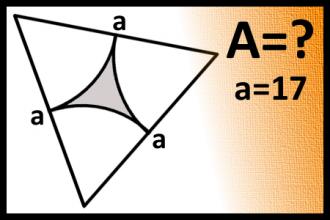 Find the area of the shaded figure

Don't break anybody's heart; they only have 1. Break their bones; they have 206.
#joke #short
Joke | Source: Laugh Factory Network - Watch our huge library of the best stand-up comedy videos, get information on our stand-up comedians, read our joke of the day

George and Lenny decide to cross North America in a hot air balloon. However, neither were particularly experienced balloonists, and Lenny's mind quickly drifted from navigation to thoughts of how clouds look like cuddly little bunny rabbits. Upon realizing that they were lost, George declared, "Lenny -- we are going to have to lose some altitude so we can figure out where we are."

George lets some hot air out of the balloon, which slowly descended below the clouds, but he still couldn't tell where they were. Far below, they could see a man on the ground. George lowered the balloon, to ask the man their location.

When they were low enough, George called down to the man, "Hey, can you tell us where we are?" The man on the ground yelledback, "You're in a balloon, about 100 feet up in the air."

George Called down to the man, "You must be a lawyer." "Gee, George," Lenny replied, "How can you tell?" George answered, "Because the advice he gave us is 100% accurate, and is completely useless".

The man called back up to the balloon, "You must be a client." George yelled back, "Why do you say that?" "Well," the man replied, "you don't know where you are, or where you are going. You got into your predicament through a lack of planning, and could have avoided it by asking for help before you acted. You expect me to provide an instant remedy. The fact is you are in the exact same position you were in before we met, but now it is somehow my fault."

A psychotherapist was enjoying

A psychotherapist was enjoying a growing practice since he graduatedcollege. So much so that he could now afford to have a proper signadvertising his services. So he told a kid to paint a signboard forhim & put it above his clinic entrance.
Instead of his business building up, it declined steeply. He hadespecially noticed the ladies shying away from his clinic afterreading the sign. So he decided to check it out for himself.One look and he understood why. The boy only found a small woodenboard to paint the sign on and he had split the word psychotherapistinto the 3 words. His new sign read:
Psycho-
the-
rapist