A little boy was sitting outsi...

A little boy was sitting outside a store eating one snickers candy bar after another, when an older man walked up and said: "You shouldn't be eating so much candy, it'll rot your teeth, it's just bad for you to eat so much candy."
The little boy looked up and said: "My grandfather lived to be 95 years old."
The older man asked: "Oh? by eating snickers candy bars?"
The little boy said: "No... by minding his own business."

Closer Than You Think!

Closer Than You Think!
An unemployed man goes to apply for a job with Microsoft as a janitor. The manager there arranges for him to take an aptitude test (Section: Floors, sweeping and cleaning).
After the test, the manager says, "You will be employed at minimum wage, $5.15 an hour. Let me have your e-mail address, so that I can send you a form to complete and tell you where to report for work on your first day. Taken aback, the man protests that he has neither a computer nor an e-mail address. To this the MS manager replies, "Well, then, that means that you virtually don't exist and can therefore hardly expect to be employed.
Stunned, the man leaves. Not knowing where to turn and having only $10 in his wallet, he decides to buy a 25 lb flat of tomatoes at the supermarket. Within less than 2 hours, he sells all the tomatoes individually at 100% profit. Repeating the process several times more that day, he ends up with almost $100 before going to sleep that night. And thus it dawns on him that he could quite easily make a living selling tomatoes. Getting up early every day and going to bed late, he multiplies his profits quickly.
After a short time he acquires a cart to transport several dozen boxes of tomatoes, only to have to trade it in again so that he can buy a pick-up truck to support his expanding business. By the end of the second year, he is the owner of a fleet of pick-up trucks and manages a staff of a hundred former unemployed people, all selling tomatoes.
Planning for the future of his wife and children, he decides to buy some life insurance. Consulting with an insurance adviser, he picks an insurance plan to fit his new circumstances. At the end of the telephone conversation, the adviser asks him for his e-mail address in order to send the final documents electronically. When the man replies that he has no e-mail, the adviser is stunned, "What, you don't have e-mail? How on earth have you managed to amass such wealth without the Internet, e-mail and e-commerce? Just imagine where you would be now, if you had been connected to the Internet from the very start!"
After a moment of thought, the tomato millionaire replied, "Why, of course! I would be a floor cleaner at Microsoft!"
Moral of this story:
1. The Internet, e-mail and e-commerce do not need to rule your life.
2. If you don't have e-mail, but work hard, you can still become a millionaire.
3. Since you got this story via e-mail, you're probably closer to becoming a janitor than you are to becoming a millionaire.
4. If you do have a computer and e-mail, you have already been taken to the cleaners by Microsoft.

You've all heard of the Air Force's ultra-high-security, super- secret base in Nevada, known simply as "Area 51?"

Well, late one afternoon, the Air Force folks out at Area 51 were very surprised to see a Cessna landing at their "secret" base. They immediately impounded the aircraft and hauled the pilot into an interrogation room.

The pilot's story was that he took off from Vegas, got lost, and spotted the Base just as he was about to run out of fuel. The Air Force started a full FBI background check on the pilot and held him overnight during the investigation.

By the next day, they were finally convinced that the pilot really was lost and wasn't a spy. They gassed up his airplane, gave him a terrifying "you-did-not-see-a-base" briefing, complete with threats of spending the rest of his life in prison, told him Vegas was that-a-way on such-and-such a heading, and sent him on his way.

The next day, to the total disbelief of the Air Force, the same Cessna showed up again. Once again, the MP's surrounded the plane...only this time there were two people in the plane.

The same pilot jumped out and said, "Do anything you want to me, but my wife is in the plane and you have to tell her where I was last night!"

Funny Photo of the day - Falling down while carrying eggs sculpture Falling down while carrying eggs sculpture - Makes you wish to help | Source : Jokes of The Day - By Jokes of the day visitor 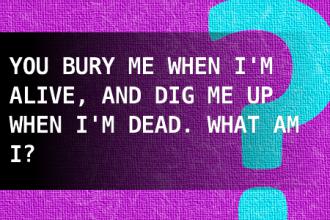 You bury me when I'm alive, and dig me up when I'm dead. What am I?
CHECK ANSWER
Brain Teasers, puzzles, riddles, mathematical problems, mastermind, cinemania...