The Wisdom of Yoda continued

The Wisdom of Yoda continued
#joke
Joke | Source: Friars Club - For over 25 years the Sunshine Committee has been providing entertainment, companionship and love to children's and senior citizens centers in the NY area.

Where Did She Go?

An elderly woman in her nineties had a visitor from her church come to see her at the nursing home. “How are you?” the visitor asked. “Oh,” said the elderly woman, “I’m just worried sick!”“You look like you’re in good health. They take good care of you here, don’t they?”“Oh, yes, they take good care of me here.”“Do you have any pain?” the visitor asked.“No, I can’t say I do,” the elderly woman replied.“Then what has you worried sick?” the visitor asked.The elderly woman leaned in and explained, “All of my closest friends have already died and gone to heaven. I’m sure they are all wondering where I went!”From "The Book of Church Jokes," published by Barbour Publishing, Inc., Uhrichsville, Ohio. Copyright 2009. Used by permission of Barbour Publishing, Inc.
#joke
Joke | Source: Belief net - Joke of the day, features on religion, spirituality, faith

An idiot was taking sky-diving...

An idiot was taking sky-diving lessons. The instructor explained that it was time for his first jump, and all he had to do was jump from the plane, count to six, and pull the rip cord. A truck would be waiting for him in the field where he would land.
The man jumped from the plane when he was told to, and counted to six. When he pulled the rip cord, the parachute wouldn't open. He tried the reserve chute and that didn't open.
Frustrated, he muttered to himself as he fell, "I'll bet the damn truck won't be waiting for me either."

Funny Photo of the day - Floating Cycling Gym In Paris Floating Cycling Gym In Paris | Source : Jokes of The Day - By Jokes of the day visitor

"Mr. Clark, I'm afraid I have bad news," the doctor told his anxious patient. "You only have six months to live."

The man sat in stunned silence for the next several minutes. Regaining his composure, he apologetically told his physician that he had no medical insurance. "I can't possibly pay you in that time."


The snack bar next door to an atom smasher was called "The Fission Chips."
On April Fools Day, a mother put a fire cracker under the pancakes. She blew her stack.
A new chef from India was fired a week after starting the job. He keep favoring curry.
A couple of kids tried using pickles for a Ping-Pong game. They had the volley of the Dills.
The four food groups: Fast, Frozen, Instant, and Chocolate.
A friend got some vinegar in his ear, now he suffers from pickled hearing.
Overweight is something that just sort of snacks up on you.
Sign in restaurant window: "Eat now - Pay waiter."
I thought you were trying to get into shape?
I am. The shape I've selected is a triangle. 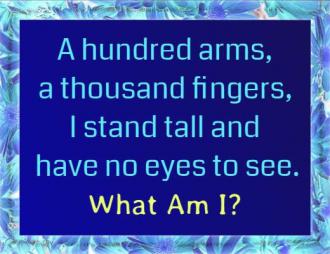 A hundred arms, a thousand f...

A hundred arms, a thousand fingers, I stand tall and have no eyes to see. What Am I?
CHECK ANSWER
Brain Teasers, puzzles, riddles, mathematical problems, mastermind, cinemania...

Cracked ova for breakfast have

My husband and I both work, so

My husband and I both work, so our family eats out a lot.
Recently, when we were having a rare home-cooked meal, I handed a glass to my three-year-old and told her to drink her milk.
She looked at me bewildered and replied, "But I didn’t order milk."
#joke #short
Joke | Source: A joke a day - Free Jokes of the Day Clean Funny Jokes via Email, Humor and Entertainment

A Texan farmer goes to Australia for a vacation. There he meets an Aussie farmer and gets talking. The Aussie shows off his big wheat field and the Texan says, "Oh! We have wheat fields that are at least twice as large".
Then they walk around the ranch a little and the Aussie shows off his herd of cattle. The Texan immediately says, " We have longhorns that are at least twice as large as your cows".
The conversation has, meanwhile, almost died when the Texan sees a herd of kangaroos hopping through the field. He asks, "And what are those"?
The Aussie asks with an incredulous look, "Don't you have any grasshoppers in Texas"?

Every girl either has blonde hair with black streaks or black hair with blonde streaks. Which, either way, says: I dont have a gag reflex.
#joke #short #blonde
Joke | Old joke from joke of the day archives - Check out other old jokes Thursday, 20 January 2011