My Dog Did It Eat It

'Johnny, where's your homework?' Miss Martin said sternly to the little boy, while holding out her hand.
'My dog ate it,' was his solemn response.
'Johnny, I have been a teacher for eighteen years. Do you really expect me to believe that?'
'It's true, Miss Martin, I swear,' insisted Johnny. 'I had to force him, but he ate it!'

A sales clerk asked his boss how to handle people who complained about the current prices compared to the low prices in the good old days.
"Just act surprised and tell them you didn't think that they were old enough to remember them."

“I asked Kermit the F

“I asked Kermit the Frog what he was hunting for. He said, 'Rabbit, rabbit.'”

Don’t put your boogers in the microwave. If you do, your goos is cooked.
#joke #short

Benny had told all his friends about the delicious steak he'd eaten in the Delancey Street restaurant the day before. So they decided to go down there and see if it was really as large and delicious as he said. But, much to their disappointment, the waiter brought them the tiniest steak they'd ever seen.

"See here, my good man," Benny barked. "I was in this restaurant yesterday, and you served me a big, juicy steak, and now today, when I've organized a party and highly recommended this place, you serve such a small one."

"Yes, sir," replied the waiter. "But yesterday you were sitting by the window."


Why did the pioneers cross the country in covered wagons?
Because they didn't want to wait 40 years for a train!

Why did the teacher wear sunglasses?
Because his class was so bright!

Did you hear about the cross eyed teacher?
He couldn't control his pupils!

Teacher: What family does the octopus belong to?
Pupil: Nobody I know! 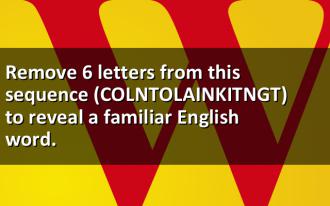 A New Orleans lawyer sought an

A New Orleans lawyer sought an FHA loan for a client. He was told the loan would be granted if he could prove satisfactory title to a parcel of property being offered as collateral. The title to the property dated back to 1803, which took the lawyer three months to track down. After sending the information to the FHA, he received the following reply.
(Actual letter):
"Upon review of your letter adjoining your client's loan application, we note that the request is supported by an Abstract of Title. While we compliment the able manner in which you have prepared and presented the application, we must point out that you have only cleared title to the proposed collateral property back to 1803. Before final approval can be accorded, it will be necessary to clear the title back to its origin."
Annoyed, the lawyer responded as follows (actual letter):
"Your letter regarding title in Case No. 189156 has been received. I note that you wish to have title extended further than the 194 years covered by the present application. I was unaware that any educated person in this country, particularly those working in the property area, would not know that Louisiana was purchased, by the U.S. , from France in 1803, the year of origin identified in our application.
For the edification of uninformed FHA bureaucrats, the title to the land prior to U.S. ownership was obtained from France , which had acquired it by Right of Conquest from Spain
The land came into the possession of Spain by Right of Discovery made in the year 1492 by a sea captain named Christopher Columbus, who had been granted the privilege of seeking a new route to India by the Spanish monarch, Isabella. The good queen, Isabella, being a pious woman and almost as careful about titles as the FHA, took the precaution of securing the blessing of the Pope before she sold her jewels to finance Columbus' expedition. Now the Pope, as I'm sure you may know, is the emissary of Jesus Christ, the Son of God, and God, it is commonly accepted, created this world. Therefore, I believe it is safe to presume that God also made that part of the world called Louisiana . God, therefore, would be the owner of origin and His origins date back, to before the beginning of time, the world as we know it AND the FHA. I hope you find God's original claim to be satisfactory. Now, may we have our damn loan?"
The loan was approved.

Walking through Chinatown, a tourist is fascinated with all the Chinese restaurants, shops, signs and banners. He turns a corner and sees a building with the sign, "Hans Olaffsen's Laundry."

"Hans Olaffsen?", he muses. "How the heck does that fit in here?"

So he walks into the shop and sees an old Chinese gentleman behind the counter.

The tourist asks, "How did this place get a name like "Hans Olaffsen's Laundry?"

The old man answers, "Is name of owner."

The tourist asks, "Well, who and where is the owner?"

"Me, is right here," replies the old man.

"You? How did you ever get a name like Hans Olaffsen?"

"Is simple," says the old man. "Many, many year ago when come to this country, was stand in line at Documentation Center. Man in front was big blonde Swede. Lady look at him and go, "What your name?" He say, "Hans Olaffsen." Then she look at me and go, 'What your name?'"

You know who Uncle Sam is, hes that goat-faced dude who dresses like Apollo Creed. Hes always pointing at you. He wants you. Is that really the imagery we should be listening to? An uncle who looks like hes about to touch you? Uncle Sam wants you to keep a secret.
#joke #short
Joke | Old joke from joke of the day archives - Check out other old jokes Sunday, 21 August 2011

A rabbi, priest, and a minister are out fishing in a boat on a big lake when the priest realizes that he has to go to the bathroom. Not wanting to disturb the fishing of the others in the boat by having them take him to shore, he gets out of the boat and walks across the water to do his business and then returns to the boat.A little while later the minister has to go also and he does the same. He walks across the water, does his business and returns across the water to the boat.
Finally the rabbi feels the urge to go to the bathroom too, so he climbs out of the boat. But instead of walking across the water, he falls into the water and starts to wildly splash around. The priest and the minister finally drag the rabbi back into the boat and the priest turns to the minister and says, "Maybe we should have told him where the rocks were."