Once two star football players had failed a test, and could not play football in the championship game.
So, after much begging from the coach, the teacher finally let the two take the test again.
They took the test, and turned it in.
The coach and the two students watched carefully over the teacher grading the tests. She checked over the first test, then over the second test. Half way through the second test she stopped and put a great big 'F' on both tests.
The coach was furious and demanded an explanation. She said that they had cheated. 'Why?' the coach asked.
The teacher showed him number six. The coach looked at number six on the first test.
The answer read 'I don't know.' The coach said that it did not prove anything.
The teacher handed him the second test. The answer read 'I don't know either.'

A golfer was sitting in the cl

A golfer was sitting in the clubhouse after playing a round. He looked upset, so his friend went over and asked what was wrong.
The golfer said, "It was terrible. On the 16th hole I sliced one out onto the freeway and it went through the windshield of a bus, and there was a horrible accident. The bus went out of control and hit a car head-on. There were dead people all over the place."
His friend said, "That's awful. What did you do?"
"Well, I closed up my stance and shortened my backswing a little."

The pun about cross-breeding a

A fire fighter is working on t

A fire fighter is working on the engine outside the station when he notices a little boy next door in a little red wagon with a tiny ladders hung off the side and a garden hose tightly coiled in the middle. The boy is wearing a fire fighter's helmet and has the wagon tied to a dog and a cat. The fire fighter walks over to take a closer look. "That sure is a nice fire truck," the fire fighter says with admiration.
"Thanks," says the little boy. As the fire fighter looks a little closer, he notices the boy has tied the wagon to the dog's collar and to the cat's testicles.
"Little partner," the fire fighter says, "I don't want to tell you how to run your fire truck, but if you were to tie that rope around the cat's collar, I think you could go faster."
The little boy says, "You're probably right, but then I wouldn't have a siren."

Signs of the times...

When the bartender returned to him, the man asked how he had learned to use sign language. The bartender explained that these were regular customers and had taught him to speak in sign. The man thought that was great.

A few minutes later the man noticed that the people in the group were waving their hands around very wildly. The bartender looked over and signed "Now cut that out! I warned you!" and threw the group out of the bar.

The man asked why he had done that and the bartender said, "If I told them once I told them 100 times - NO SINGING IN THE BAR!" 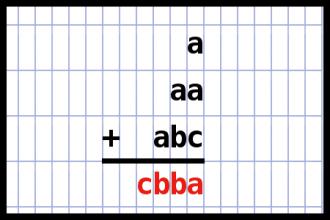 Determine the value of the number CBBA

How To Get Across The River


A blonde once got lost near a river. She traveled up and down it searching for a way to get to the other side.
She tried walking in the shallow part of the river, and she even tried grabbing onto a branch that stretched half way across the river to try to swing to the other side. No matter how hard she tried she couldn't get across.
After many failed attempts, she finally felt like giving up. Yet, at the last moment, she saw a person walking by and decided to follow her--across the bridge.

Ole says, "And Lena, did you know there are more than 2 million caribou living in Alaska?"

"No," says Lena, wondering how this conversation came about in the middle of their sex play.

"How did you get so smart?"

Ole says, "Remember last night when we ran out of toilet paper and had to use the pages out of magazines?"

"Well, you still have page 63 of National Geographic stuck to your ass."

Ron, an elderly man in Australia, had owned a large farm for several years. He had a large pond at the back.
It was properly shaped for swimming, so he fixed it up nice with picnic tables, horseshoe courts, and some orange and lime trees.

One evening the old farmer decided to go down to the pond, as he hadn't been there for a while, and look it over.
He grabbed a five-gallon bucket to bring back some fruit. As he neared the pond, he heard voices shouting and laughing with glee.

As he came closer, he saw it was a bunch of young women skinny-dipping in his pond. He made the women aware of his presence, and they all went to the deep end.
One of the women shouted to him, "We're not coming out until you leave!"

Ron frowned, "I didn't come down here to watch you ladies swim naked or make you get out of the pond naked."
Holding the bucket up Ron said, "I'm here to feed the alligator."

Daniel Tosh: Only One Tattoo

I think if youre gonna get a tattoo, just get one: the words, Im dumb. Thats it. That way in 10 years, when you go, Why did I get this?, you can be like, Oh, Im dumb!
#joke #short
Joke | Old joke from joke of the day archives - Check out other old jokes Wednesday, 29 September 2010

Jimmy Dore: Growing Up in a Big Family

They go, Well, you learn a lot about life growing up in a big family, dont you? Yeah, I learned that Im replaceable.
#joke #short
Joke | Old joke from joke of the day archives - Check out other old jokes Thursday, 29 September 2011