A woman went into a bank to get a check cashed, but she didn't have an account with them. When the teller her asked for some identification, the woman showed her several charge cards, her social security card and a library card.
The teller told her they needed a driver's license, but the woman said she didn't have one.
"Don't you have anything with your picture on it?" the teller asked.
"Oh, sure," she said, as she flipped to a family photo in her wallet. "That's me in the back row."

ATTORNEY: What gear were you in at the moment of the impact?
WITNESS: Gucci sweats and Reeboks.

One day the teacher decides to

One day the teacher decides to play an animal game. She holds up apicture of a giraffe and asks if anyone knows what it is. No oneraises his/her hand. The teacher says "See it's long neck? Whatanimal has a long neck?"
Sally holds up her hand and asks if it is a giraffe.
"Very good Sally," the teacher replies. Next she holds up a picture of a zebra.None of the students holds up his/her hands. "See the stripes onthis animal? What animal has stripes?"
Billy holds up his hand and says it is a zebra. "Very good Billy," the teacher replies. Nextshe holds up a picture of a deer. None of the students recognizedthe animal.
"See the big antlers on this animal. What animal has horns like this?"
Still no one guesses. "Let me give you another hint, it'ssomething your mother calls your father."
Johnny shouts out "I know what it is, it's a horny bastard."

Are you an honest lawyer...

An investment counselor decided to go out on her own. She was shrewd and diligent, so business kept coming in, and pretty soon she realized that she needed an in-house counsel. She began to interview young lawyers.

"As I'm sure you can understand," she started off with one of the first applicants, "in a business like this, our personal integrity must be beyond question." She leaned forward. "Mr. Peterson, are you an honest lawyer?"

"Honest?" replied the job prospect. "Let me tell you something about honest. Why, I'm so honest that my father lent me $15,000 for my education, and I paid back every penny the minute I tried my very first case." 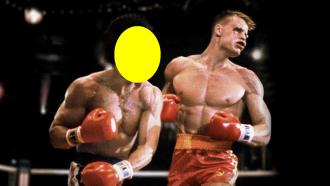 Take a look at the picture of the movie scene and guess the name of the person whose face is not visible. Length of words in solution: 9,8
CHECK ANSWER
Brain Teasers, puzzles, riddles, mathematical problems, mastermind, cinemania...

There was a young Scottish boy called Angus who decided to try life in Australia. He found an apartment in a small block and settled in.
After a week or two, his mother called from Aberdeen to see how her son was doing in his new life.
'I'm fine, ' Angus said. 'But there are some really strange people living in these apartments. One woman cried all day long, another lies on her floor moaning, and there is a guy next door to me who bangs his head on the wall all the time.'
'Well, ma laddie,' says his mother, 'I suggest you don't associate with people like that.'
'Oh,' says Angus, 'I don't, Mam, I don't. No, I just stay inside my apartment all day and night, playing my bagpipes.'