The judge asked the defendant,

The judge asked the defendant, "Mr. Jones, do you understand that you have sworn to tell the truth, the whole truth, and nothing but the truth?"
"I do."
"Now what do you say to defend yourself?"
"Your Honor, under those limitations ... nothing."

What Is A Committee?

What is a committee?
A committee is a group that keeps minutes and loses hours.

Four guys were at deer camp...

The first-grade teacher was showing pictures of animals to her students to see how many they could name. She held up a picture of a lamb, and a little girl said, "That's a sheep!"

"That's right!" said the teacher. "How about THIS one?" she said, holding up a picture of the king of beasts.

"Right!" said the teacher. Then she held up a picture of a deer. No one volunteered an answer. She tried to help. "What does your mother call your father?"

Overfishing makes us hard of herring. I won't eat farmed fish either: I don't believe in roughy housing, or carp pooling. I've haddock up to here!
#joke #short
Joke | Old joke from joke of the day archives - Check out other old jokes Sunday, 29 November 2009

A very shy guy goes into a bar and sees a beautiful woman sitting at thebar. After an hour of gathering up his courage he finally goes over to herand asks, tentatively, "Um, would you mind if I chatted with you for awhile?"
She responds by yelling, at the top of her lungs, "No, I won't sleep withyou tonight!" Everyone in the bar is now staring at them.
Naturally, the guy is hopelessly and completely embarrassed and he slinksback to his table.
After a few minutes, the woman walks over to him and apologizes. Shesmiles at him and says, "I'm sorry if I embarrassed you. You see, I'm agraduate student in psychology and I'm studying how people respond toembarrassing situations."
To which he responds, at the top of his lungs, "What do you mean $200?"
#joke
Joke | Old joke from joke of the day archives - Check out other old jokes Wednesday, 09 December 2009 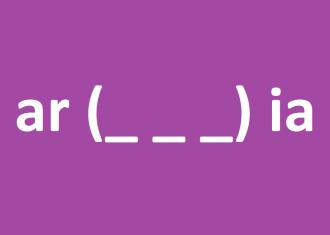 There are two incomplete wor...

There are two incomplete words. Place three (3) letters in bracket so that you can complete the word on the left and begin the word on the right.
CHECK ANSWER
Brain Teasers, puzzles, riddles, mathematical problems, mastermind, cinemania...

As Im standing there, I see they have a little sign with pictures of things you are not allowed to bring on the plane anymore. And they have, like, little drawings: circle, line through it, No! One of the things you cant bring on the plane anymore is a bomb -- no, no, they had a picture, cant do it. And it was the classic cartoon bomb, like the bowling ball with the little sparky whip coming out of it. And then you might think, Oh, I got a way around that. Uh-uh, not so fast -- they also had a picture of the bundle of dynamite with the clock.
#joke
Joke | Old joke from joke of the day archives - Check out other old jokes Thursday, 09 December 2010

Q: What do women, tornadoes and hurricanes have in common?
A: They all get the house.
#joke #short
Joke | Old joke from joke of the day archives - Check out other old jokes Wednesday, 09 December 2009