Watch What You Order

A soldier at the Pentagon got

A soldier at the Pentagon got out of the shower, and realized that his clothes were missing. While searching around for them, he accidentally locked himself out of the locker room, and he found himself completely naked in the halls of the world''s most powerful military organization HQ. But, luckily, no one was around to see him.
So, he ran as fast as he could to the elevator. When it arrived, it was empty. He breathed a sigh of relief and got in. When the doors opened on his floor, there was no one waiting outside. "This must be my lucky day," he said to himself. He was now only a few yards from his office.
Suddenly, he heard footsteps coming from around the corner. He heard the General's voice. There was no way he'd make it to his door in time, so he ducked into the closest office available, and found himself in the laboratory for Research & Development. The Head Scientist looked up from one of her experiments with puzzled interest.
The soldier thought quickly, stood up straight and saluted.
"I am here to report the partial success of the Personal Invisibility Device," he said.
"I see," the Head Scientist said. "But the Shrink Ray seems to be working perfectly."

A woman in Atlantic City was losing at the roulette wheel. When she was down to her last 10 dollars, she asked the fellow next to her for a good number.

Why dont you play your age? he suggested.

The woman agreed, and then put her money on the table.

The next thing the guy with the advice knew, the woman had fainted and fallen to the floor. He rushed right over.

Did she win? he asked.

#joke #blonde
Joke | Old joke from joke of the day archives - Check out other old jokes Tuesday, 16 May 2017 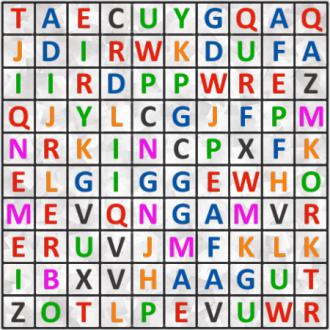 Find the first and the last name of a famous person. Text may go in all 8 directions. Length of words in solution: 5,6.
CHECK ANSWER
Brain Teasers, puzzles, riddles, mathematical problems, mastermind, cinemania...