NED: Was it was strange working beside the woman who had poseable breasts?
ED: Yes – it was quite the jugs-to-position!
#joke #short
Joke | Source: Pun Gents - Daily Jokes, One-liners, Groaners, Puns of the day :: Puns on Demand :: Punshine Girls and Boys!

A man placed some flowers on the grave of his dearly departed mother and started back toward his car when his attention was diverted to another man kneeling at a grave. The man seemed to be praying with profound intensity and kept repeating, "Why did you have to die? Why did you have to die?"
The first man approached him and said, "Sir, I don't wish to interfere with your private grief, but this demonstration of pain is more than I've ever seen before. For whom do you mourn so deeply? A child? A parent?" The mourner took a moment to collect himself, then replied, "My wife's first husband."

Store Manager: "I saw you argu

Husband throwing darts at his wife's photo and not even a single throw hitting the target.
From another room the wife calls, "Honey, what are you doing?"
Husband: "MISSING YOU..."

TEACHER: To get to the other s

TEACHER: To get to the other side.
PLATO: For the greater good.
ARISTOTLE: It is in the nature of chickens to cross roads.
KARL MARX: It was a historical inevitability.
ANDERSEN CONSULTING: Deregulation of the chicken's side of the road was threatening its dominant market position. The chicken was faced with significant challenges to create and develop the competencies required for the newly competitive market. Andersen Consulting, in a partnering relationship with the client, helped the chicken by rethinking it's physical distribution strategy and implementation process. Using the Poultry Integration Model (PIM), Andersen helped the chicken use it's skills, methodologies, knowledge capital and experiences to align the chicken's people, processes and technology in support of it's overall strategy within a Program Management framework. Andersen Consulting convened a diverse cross-spectrum of road analysts and best chickens along with Andersen consultants with deep skills in the transportation industry to engage in a two day itinerary of meetings in order to leverage their personal knowledge capital, both tacit and explicit, and to enable them to synergize with each other in order to achieve theimplicit goals of delivering and successfully architecting and implementing an enterprise-wide value framework across the continuum of poultry cross-median processes. The meeting was held in a park-like setting, enabling and creating an impactful environment which was strategically based, industry-focused, and built upon a consistent, clear and unified market message and aligned with the chicken's mission, vision and core values. This was conducive towards the creation of a total business integration solutionparadigm.
TIMOTHY LEARY: Because that's the only trip the establishment would let it take.
SADDAM HUSSEIN: This was an unprovoked act of rebellion and we werequite justified in dropping 50 tons of nerve gas on it.
RONALD REAGAN: I forget.
CAPTAIN JAMES T. KIRK: To boldly go where no chicken has gone before.
LOUIS FARRAKHAN: The road, you see, represents the black man. The chicken 'crossed' the black man in order to trample him and keep him down.
MARTIN LUTHER KING, JR.: I envision a world where all chickens will be free to cross roads without having their motives called into question.
MOSES (Monty Python style): And God came down from the Heavens, and he said unto the chicken, "Thou shalt cross the road." And the chicken crossed the road, ...and there was much rejoicing.
FOX MULDER: You saw it cross the road with your own eyes. How many more chickens have to cross the road for you to believe it?
RICHARD M. NIXON: The chicken did not cross the road. I repeat, the chicken DID NOT cross the road.
MACHIAVELLI: The point is that the chicken crossed the road. Who cares why? The end of crossing the road justifies whatever motive there was.
JERRY SEINFELD: Why does anyone cross the road? I mean, why doesn't anyone ever think to ask, "What the heck was the chicken doing wandering around all over the place anyway?"
FREUD: The fact that you are at all concerned that the chicken crossed the road reveals your underlying sexual insecurity.
BILL GATES: I have just released the new Chicken Office 2010 (with integrated Internet Seed Explorer), which will not only cross roads, butwill lay eggs, file your important documents, and balance your checkbook.
OLIVER STONE: The question is not, "Why did the chicken cross the road?" Rather, it is, "Who is crossing the road at the same time, whom we overlooked in our haste to observe the chicken crossing?"
DARWIN: Chickens, over great periods of time, have been naturally selected in such a way that they are genetically disposed to cross roads.
EINSTEIN: Whether the chicken crossed the road or the road moved beneath the chicken depends upon your frame of reference.
BUDDHA: Asking the question denies your own chicken nature.
RALPH WALDO EMERSON: The chicken did not cross the road...it transcended it.
ERNEST HEMINGWAY: To die. In the rain 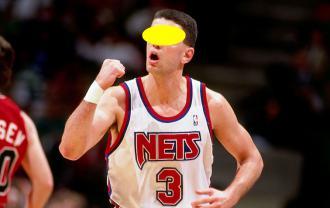 On the first day of college, the Dean addressed the students, pointing out some of the rules:

He continued, "Anybody caught breaking this rule the second time will be fined $60. Being caught a third time will cost you a fine of $180. Are there any questions?"

At this point, a male student in the crowd inquired: "How much for a season pass?"

Osama found the biggest, meanest Doberman and Rottweiler female dogs in the world and bred them with the meanest Siberian wolves. They selected only the biggest and strongest puppy from the litter, and removed his siblings, which gave him all the milk. After 5 years, they came up with the biggest, meanest dog the world had ever seen. Its cage needed steel bars that were 5 " thick and nobody could get near it.

When the day came for the dog fight, Bush showed up with a strange looking animal. It was a 9 foot long Dachshund. Everyone felt sorry for Bush because there was no way that this dog could possibly last 10 seconds with the Afghanistani dog. When the cages were opened up, the Dachshund came out of it's cage, and slowly waddled over towards Osama's dog. Osama's dog snarled and leaped out of its cage and charged the American Dachshund---but when it got close enough to bite, the Dachshund opened its mouth and consumed Osama's dog in one bite. There was nothing left of his dog at all.

Osama came up to Bush, shaking his head in disbelief, "We don't understand how this could have happened. We had our best people working for 5 years with the meanest Doberman and Rottweiler female dogs in the world and the biggest, meanest Siberian wolves."

"That's nothing,", said Bush. "We had Michael Jackson's plastic surgeons working for 5 years to make that alligator look like a weenie dog."

Sister Margaret was a model nun all of her life, until she was called to get her just rewards. As she approached the pearly gates, Saint Peter said "Hold on, Sister Margaret...not so fast!"

"But I have been good all my life and dedicated to the work of the Lord. From the time I was taken in as an infant by the sisters at the convent to my dying breath... I have lived for this moment!" Sister Margaret exclaimed in disbelief.

"That is precisely the problem," replied St. Peter, "...you never learned right from wrong and to get into heaven, you must know the difference between right and wrong".

"Well, what can I do? I will do anything to get into heaven!" Sister Margaret pleaded.

"I am going to have to send you back down to Earth. When you get there, I want you to smoke a cigarette and call me when you are finished. We will discuss your situation then." ordered St. Peter.

Sister Margaret returned to Earth, smoked a Camel, and then immediately called St. Peter, coughing and hacking. "Saint Peter" she gasped, "I can hardly breathe, my mouth tastes terrible, my breath stinks, I feel dizzy, and I think I am going to throw up".

"Good!" replied the old saint, "Now you are finally getting a feel for right and wrong. Now go out tonight and drink some hard liquor and call me back when you are ready."

"Saint Peter, I feel woozy... that vile liquid burned my throat and nauseated me...it is all I can do to keep it down."

"Good...good! Now you are starting to see the difference between right and wrong," said St. Peter with delight.

"Tomorrow I want you to seek out a man and know him in the Biblical sense, and then call me."

A week passed before Sister Margaret called St. Peter and left a message: