What do you call it when a Fre

What do you call it when a French psychoanalyst falls on the winter ice?
#joke #short
Joke | Source: Pun Gents - Daily Jokes, One-liners, Groaners, Puns of the day :: Puns on Demand :: Punshine Girls and Boys!

A man has been undergoing medi

A man has been undergoing medical treatment, and meets with his doctor to review some tests.
Doctor: I'm sorry, but I have bad news. Your condition is now incurable, and you have only 6 months to live. I recommend you get your affairs in order.
Man: That's terrible! Isn't there anything you can do? Surely there's some treatment!
Doctor: No, we've been using the best available medicines, and they aren't working.
Man: I'll try anything...what about experimental treatments?
Doctor: There aren't any for your disease, I'm afraid.
Man, desperate: Maybe alternate medicine?
Doctor, impatient: Well, I don't believe in that stuff, but if you insist...you can go to the spa up the road everyday and get a mud bath.
Man: Really? That will help?
Doctor: No, but it will get you used to dirt.

College is really just kidnapping done backwards...
If you don’t give us a ridiculously large amount of money, we’ll send you your child back!

Henry goes to confession and says, "Bless me Father, for I have sinned. Last night I was with seven different women."

The priest says, "Take seven lemons, squeeze them into a glass and drink the juice without pausing."

"Will that cleanse me of my sins, Father?"

"No," replies the priest. "But it'll wipe that silly grin off your face."

1. Chicago Cubs outfielder Andre Dawson on being a role model:
I wan' all dem kids to do what I do, to look up to me. I wan' all thekids to copulate me."
2. New Orleans Saint RB George Rogers when asked about the upcoming season:
"I want to rush for 1,000 or 1,500 yards, whichever comes first.."
3. And, upon hearing Joe Jacobi of the 'Skin's say:
"I'd run over my own mother to win the Super Bowl,"
Matt Millen of the Raiders said: "To win, I'd run over Joe's Mom, too."
4. Torrin Polk, University of Houston receiver, on his coach, John Jenkins:
"He treat us like mens. He let us wear earrings.."
5. Football commentator and former player Joe Theismann:
"Nobody in football should be called a genius. A genius is a guy likeNorman Einstein."
6. Senior basketball player at the University of Pittsburgh :
"I'm going to graduate on time, no matter how long it takes.."
(Now that is beautiful)
7. Bill Peterson, a Florida State football coach:
"You guys line up alphabetically by height.."And, "You guys pair up in groups of three, and then line up in acircle."
8. Boxing promoter Dan Duva on Mike Tyson going to prison:
"Why would anyone expect him to come out smarter? He went to prison forthree years, not Princeton .."
9. Stu Grimson, Chicago Blackhawks left wing, explaining why he keeps acolor photo of himself above his locker:
"That's so when I forget how to spell my name, I can still find myclothes."
10. Lou Duva, veteran boxing trainer, on the Spartan training regimen ofheavyweight Andrew Golota:
"He's a guy who gets up at six o'clock in the morning, regardless ofwhat time it is."
11. Chuck Nevitt, North Carolina State basketball player, explaining toCoach Jim Valvano why he appeared nervous at practice:
"My sister's expecting a baby, and I don't know if I'm going to be anuncle or an aunt.
12. Frank Layden, Utah Jazz president, on a former player:
"I asked him, 'Son, what is it with you? Is it ignorance or apathy?'
He said, 'Coach, I don't know and I don't care.'"
13. Shelby Metcalf, basketball coach at Texas A&M, recounting what he told aplayer who received four F's and one D:
"Son, looks to me like you're spending too much time on one subject."
14. In the words of NC State great Charles Shackelford:
"I can go to my left or right, I am amphibious."
15. Former Houston Oilers coach Bum Phillips when asked by Bob Costas why hetakes his wife on all the road trips....
Phillips responded: "Because she's too ugly to kiss good-bye." 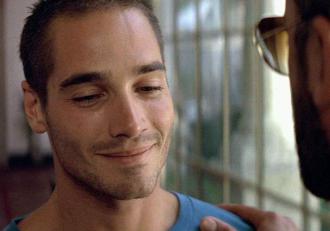 Guess the name of the second actor

Look carefully at the picture and guess the name of the second actor at the scene.
CHECK ANSWER
Brain Teasers, puzzles, riddles, mathematical problems, mastermind, cinemania...

A doctor at an insane asylum decided to take his patients to a baseball game.

For weeks in advance, he coached his patients to respond to his commands.

When the day of the game arrived, everything went quite well. As the national anthem started, the doctor yelled, “Up Nuts”, and the patients complied by standing up. After the anthem, he yelled, “Down Nuts”, and they all sat back down in their seats.

After a home run was hit, the doctor yelled, “Cheer Nuts” They all broke out into applause and cheered. When the umpire made a particularly bad call against the star of the home team, the Doctor yelled, “Booooo Nuts” and they all started booing and cat calling.

Comfortable with their response, the doctor decided to go get a beer and a hot dog, leaving his assistant in charge. When he returned, there was a riot in progress.

Finding his missing assistant, the doctor asked:” What in the world happened?”

The assistant replied: “Well everything was going just fine until this guy walked by and yelled, “PEANUTS!”

A guy goes to see the doctor...

A guy goes to see the doctor, because he's a little too well-endowed. In fact, it's 25 inches long and he can't get any women to have sex with him.
Anyway, the doctor says there's nothing he can do medically, but recommends a witch doctor that he thinks might be able to help.
The witch doctor takes a look at the problem and tells him to go to a particular pond, deep in the forest, and talk to a frog that lives there. "Ask the frog to marry you and each time the frog says no, you'll be 5 inches shorter."
Worth a try, he thinks, and off he dashes into the forest. He finds the pond and sees the frog on the other side, sitting on a log. "Frog, will you marry me?"
The frog looks at him, disinterested at best, and calls back, "No."
The guy looks down and sure enough, he's 5 inches shorter. Hey, this is great he thinks -- let's try that again. "Will you marry me?"
The frog rolls his eyes, and shouts back again, "No!"
Zappo! -- the guy's down to 15 inches. Well, that's still a bit excessive, he thinks. Down another 5 would be perfect. So he calls across again, "Frog, will you marry me?"
The irritated frog yells back, "Look..how many times do I have to tell you? No, No, NO!"

Little Johnny was caught swearing by his teacher.

"Johnny," she said, "you shouldn't use that kind of language. Where did you hear such talk, anyway?"

"My daddy said it," he responded.

"Well, that doesn't matter," explained the teacher. "You don't even know what it means."

"I do, too!" Little Johnny retorted. "It means the car won't start."