This co-worker of mine, who I dont know well at all, comes up to me and goes, Hey Jessi, I dont know if anyones ever told you this before, but you look a lot like Anne Frank. I didnt really know where to put that as a remark. But the worst thing is that my first thought was, Was Anne Frank hot?
#joke #short
Joke | Source: Comedy Central: Jokes - Jokes provided daily from Comedy Central's archive.

-You got to find somebody who likes the same stuff. Like, if you like sports, she should like it that you like sports, and she should keep the chips and dip coming.
-- Alan, age 10
-No person really decides before they grow up who they're going to marry. God decides it all way before, and you get to find out later who you're stuck with.
-- Kristen, age 10
2. WHAT IS THE RIGHT AGE TO GET MARRIED?
Twenty-three is the best age because you know the person FOREVER by then.
-- Camille, age 10
3. HOW CAN A STRANGER TELL IF TWO PEOPLE ARE MARRIED?
You might have to guess, based on whether they seem to be yelling at the same kids.
-- Derrick, age 8
4. WHAT DO YOU THINK YOUR MOM AND DAD HAVE IN COMMON?
Both don't want any more kids.
-- Lori, age 8
5. WHAT DO MOST PEOPLE DO ON A DATE?
-Dates are for having fun, and people should use them to get to know each other. Even boys have something to say if you listen long enough.
-- Lynnette, age 8 (isn't she a treasure)
-On the first date, they just tell each other lies and that usually gets them interested enough to go for a second date.
-- Martin, age 10
6. WHEN IS IT OKAY TO KISS SOMEONE?
-When they're rich.
-- Pam, age 7
-The law says you have to be eighteen, so I wouldn't want to mess with that.
- - Curt, age 7
-The rule goes like this: If you kiss someone, then you should marry them and have kids with them. It's the right thing to do.
- - Howard, age 8
7. IS IT BETTER TO BE SINGLE OR MARRIED?
It's better for girls to be single but not for boys. Boys need someone to clean up after them.
-- Anita, age 9 (bless you child )
8. HOW WOULD THE WORLD BE DIFFERENT IF PEOPLE DIDN'T GET MARRIED?
There sure would be a lot of kids to explain, wouldn't there?
-- Kelvin, age 8
And the #1 Favourite is.......
9. HOW WOULD YOU MAKE A MARRIAGE WORK?
Tell your wife that she looks pretty, even if she looks like a dump truck.
-- Ricky, age 10

It says: "Press Any Key"
It means: "Press any key you like but I'm not moving."

It says: "Press A Key"
(This one's a programmers joke. Nothing happens unless you press the "A" key.)

It says: "Installing program to C:\...."
It means: "... And I'll also be writing a few files into c:\windows and c:\windows\system where you'll NEVER find them."

It says: "Please insert disk 11"
It means: "Because I know darn well there are only 10 disks."

It says: "The application caused an error. Choose Ignore or Close."
It means: ".... Makes no difference to me, you're still not getting your work back."

A heavy snowstorm closed the schools in one town. When the children returned to school a few days later, one grade school teacher asked her students whether they had used the time away from school constructively.
"I sure did, teacher," one little girl replied. "I just prayed for more snow."

There was this guy at a bar, just looking at his drink. He stays like that for half of an hour.

Then, this big trouble-making truck driver steps next to him, takes the drink from the guy, and just drinks it all down. The poor man starts crying. The truck driver says, "Come on man, I was just joking. Here, I'll buy you another drink. I just can't stand to see a man cry."

"No, it's not that. This day is the worst of my life. First, I fall asleep, and I go late to my office. My boss, outrageous, fires me. When I leave the building, to my car, I found out it was stolen. The police said that they can do nothing. I get a cab to return home, and when I leave it, I remember I left my wallet and credit cards there. The cab driver just drives away."

"I go home, and when I get there, I find my wife in bed with the gardener. I leave home, and come to this bar. And just when I was thinking about putting an end to my life, you show up and drink my poison."
#joke
Joke | Source: Jokes of the day - Used to be Joke rating machine, but this site is dead 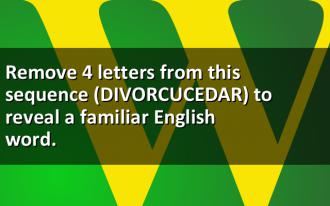 Q: What do you call a bunch of rabbits in a row all hopping backwards? <p> A: A receding hare line


Those who live by the sword get shot by those who don't.
I feel like I'm diagonally parked in a parallel universe.
He's not dead, he's electroencephalographically challenged.
She's always late. Her ancestors arrived on the Juneflower.
You have the right to remain silent....Anything you say will be misquoted, then used against you.
I wonder how much deeper the ocean would be without sponges.
Honk if you love peace and quiet.
Nothing is fool-proof to a sufficiently talented fool.
A day without sunshine is like, you know, night.
Atheism is a non-prophet organization.

Cow and Her Apples

A squirrel is chillin in a tree when a cow climbs up and sits next to him.
Whatcha doin here? asks the squirrel.
Im here to eat some apples.
But this is a pine tree!
I know. I brought my own apples.
#joke #short
Joke | Old joke from joke of the day archives - Check out other old jokes Saturday, 17 October 2009

WHAT IS A GRANDPARENT?

(taken from papers written by a class of 8-year-olds)

Grandparents are a lady and a man who have no little children of her own. They like other people's.

A grandfather is a man grandmother.

Grandparents don't have to do anything except be there when we come to see them. They are so old they shouldn't play hard or run. It is good if they drive us to the store and have lots of money for us.

When they take us for walks, they slow down past things like pretty leaves and caterpillars.

They show us and talk to us about the color of the flowers and also why we shouldn't step on "cracks."

Usually grandmothers are fat, but not too fat to tie your shoes.

They wear glasses and funny underwear.

They can take their teeth and gums out.

Grandparents don't have to be smart.

They have to answer questions like "why isn't God married?" and "How come dogs chase cats?"

When they read to us, they don't skip. They don't mind if we ask for the same story over again.

Everybody should try to have a grandmother, especially if you don't have television, because they are the only grown ups who like to spend time with us.

They know we should have snack-time before bedtime and they say prayers with us every time, and kiss us even when we've acted bad.

A 6 year old was asked where his grandmother lived. ''Oh,'' he said, ''She lives at the airport and when we want her we just go get her. Then when we're we've done having her visit, we take her back to the airport.''

Teacher: You weren't at school...

Teacher: You weren't at school last Friday, Jack. I heard you went to the movies. Jack: That's a lie! And I've got the tickets from the basketball game to prove it.
#joke #short #friday
Joke | Old joke from joke of the day archives - Check out other old jokes Friday, 17 October 2008

To the tune of The Beverly Hillbillies:

Come and listen to my story 'bout a man named John,

a poor ex-marine with a little fraction gone.

It seems one night after gettin' with his wife;

she loped off his dong with the swipe of a knife.

And Lorena is in the car taking willie for a ride.

She soon got tired of her purple-headed friend,

And she tossed him out the window as she went around a bend.

She went to the cops and confessed to the attack

and they called out the hounds just to get his weenie back.

They sniffed and they barked And they pointed 'over there'.

To John Wayne's henry that was waving in the air.

So the dick doc said, `Hey, I can fix your dong.

A needle and a thread is all we're gonna need.'

And the whole world waited 'til they heard that Johnny peed.

Well he healed and he hardened and he took his dick to court.

With a half-arsed lawyer, 'cause his assets came up short.

They cleared her assault and acquitted him of rape

And his pecker was the only one they didn't show on tape.

Ya'll sleep on your stomachs now, ya hear?!