After a nice dinner the two couples got up from the table. The ladies went into the kitchen and the men went into the family room.

One of the gents said to the other, "I think it is so wonderful how you call your wife, "honey pie" and "sweet pea", and "sugar" all the time.

The other gent said, "Well to tell you the truth, four years ago, I forget her name."

Tina was gossiping with her friend Sara.

Tina : Can you tell the Secret for a successful marriage?

Men are like a pack of Cards:
A "heart" to love them
A "diamond" to marry them
A "club" to smack them and
A "spade" to bury the body...
#joke #short
Joke | Source: A joke a day - Free Jokes of the Day Clean Funny Jokes via Email, Humor and Entertainment

A guy walks in and sits down at a bar. The side of his face is bruised and bleeding so the bartender asks, "What in the world happened to you, buddy?"

The guy says "Oh, I got in a fight with my girlfriend and I called her a two-bit whore."

"She hit me with her bag of quarters!"

Two brooms are getting married. Before the ceremony, the bride broom says to the groom broom, "I think I'm going to have a whisk."

The groom broom says, "How can that be possible? We haven't even swept together!" 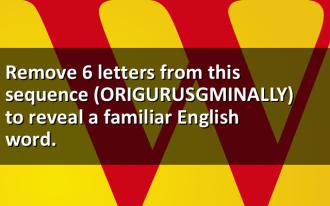 “When you purchase st...

“When you purchase stuff south of the border, you don't Peso much.”

Chuck Norris eats the core of ...

Knock Knock
Who's there?
Rabbit!
Rabbit who?
Rabbit up carefully, it's a present!

This guy walks into a bar. It was on the second floor.

He sits down and another guy walks up to him. He was dead drunk.

He said, "I betcha I can jump out that thar winder and come right back up."

The other guy said, "Yeah right." Well, the guy jumped out the window.

"Oh my god, he actually did it," said the other guy. The drunk guy seemed to float right back up to the top.

"Well, the air currents hitting the building slowly pushed me back up to the top, you wanna try it?"

"Alright, get out of the way!

The drunk guy walked and sat down at the bar. The bartender said, "Damn it Superman, you're mean when you're drunk!

An Antartian named Babbette finds herself in dire trouble. Her business has gone bust and she's in serious financial trouble. She's so desperate that she decides to ask God for help. She begins to pray... "God, please help me. I've lost my business and if I don't get some money, I'm going to lose my house as well. Please let me win the lotto."
Lotto night comes and somebody else wins it. Babbette again prays..."God, please let me win the lotto! I've lost my business, my house and I'm going to lose my car as well."
Lotto night comes and Babbette still has no luck.
Once again, she prays..."My God, why have you forsaken me?? I've lost my business, my house and my car. My children are starving. I don't often ask you for help and I have always been a good servant to you. PLEASE just let me win the lotto this one time so I can get my life back in order."
Suddenly there is a blinding flash of light as the heavens open and Babbette is confronted by the voice of God Himself: "Babbette, meet Me halfway on this. Buy a ticket."
#joke
Joke | Old joke from joke of the day archives - Check out other old jokes Tuesday, 09 March 2010

The first worm says, "What kind of day is it?"

The other worm says, "You know, I don't know, but I was thinking of going up and checking it out."

The first worm says, "That's a good idea. Why don't you do that."

So the second worm starts on his way up through the dirt.

At the same time, two lady golfers are walking along the fairway.

The first one says, "Jeez, I gotta wiz."

Her friend says, "Well, it's very early. There's nobody else here on the course."

"Do it right here. Nobody will know."

The first lady says, "You think so? Right here?"

And she agrees to do it, because it helps the joke.

She pulls down her skivvies, and lifts up her little golf dress and she squats.

She's just about to commence when the worm pokes his head up out of the grass right below her. She lets fly and he gets drenched.

He's dripping wet as he goes back down through the dirt. He goes up to the first worm, and he's soaking wet.

The first worm looks at him and says, "Oh, it's raining, huh?"

The second worm says, "Not only is it raining, but it's raining so hard the damm birds are building their nests upside-down!"