A cocky State Highways employee stopped at a farm and talked with an old farmer. He told the farmer, "I need to inspect your farm for a possible new road."

The old farmer said, "OK, but don't go in that field." The Highways employee said, "I have the authority of the State Government to go where I want. See this card? I am allowed to go wherever I wish on farm land."

So the old farmer went about his farm chores.

Later, he heard loud screams and saw the State Highways employee running for the fence and close behind was the farmer's prize bull. The bull was madder than a nest full of hornets and the bull was gaining on the employee at every step!!

The old farmer called out, "Show him your card!!"

You may have heard the following story with Bernard Shaw but you might not have noticed its relevance to insurance.
In a party, Shaw asked a dazzling lady:
'Madam, I'm quite enchanted by your beauty. Would you be willing to spend one night with me if I offered one million dollars?'
After some initial hesitation the lady admitted that she couldn't resist the offer.
Then Shaw asked, 'How about one hundred dollar'?
The lady got very upset. 'What do you think about me?', she yelled. 'Do I look like as someone with so questionable morals?'
'Lady,' Mr. Shaw answered, 'I think, we have agreed upon that, and the only thing to clarify now is the price.'
#joke
Joke | Source: Really Funny Jokes - Really Funny jokes, adult jokes, Good jokes, short funny jokes, teacher jokes, affair jokes, kids jokes, doctor jokes, funny pictures

Austria started WWI because it...

A couple is in bed sleeping when there's a rat-a-tat-tat on the door.

The husband rolls over and looks at the clock, and it's half past 3 in the morning.” I’m not getting out of bed at this time,” he thinks, and rolls over. Then, a louder knock follows. So he drags himself out of bed, goes downstairs, opens the door, and there's a man standing there. It didn't take the homeowner long to realize the man was drunk.

“Hi there,” slurs the stranger, “Can you give me a push?” “No, get lost. It's half past three and I was in bed,” says the man as he slams the door. He goes back up to bed and tell his wife what happened and she says, “That wasn't very nice of you. Remember that night we broke down in the pouring rain on the way to pick the kids up from the baby-sitter and you had to knock on that man's house to get us started again? What would have happened if he'd told us to get lost?”

“But the guy was drunk,” says the husband.

“It doesn't matter,” says the wife.” He needs our help and it would be the Christian thing to help him.” So the husband gets out of bed again, gets dressed, and goes downstairs.

He opens the door, and not being able to see the stranger anywhere,

And he hears a voice cry out, “Yeah, please.”

So, still being unable to see the stranger he shouts, “Where are you?” The drunk replies, “Over here, on the swing.” Gay people - Look strait compared to this guy | Source : This is Photobomb - Photojackers of the World Unite!


A cocky State Highways employee stopped at a farm and talked with an old farmer. He told the farmer, "I need to inspect your farm for a possible new road."

The old farmer said, "OK, but don't go in that field." The Highways employee said, "I have the authority of the State Government to go where I want. See this card? I am allowed to go wherever I wish on farm land."

So the old farmer went about his farm chores.

Later, he heard loud screams and saw the State Highways employee running for the fence and close behind was the farmer's prize bull. The bull was madder than a nest full of hornets and the bull was gaining on the employee at every step!!

The old farmer called out, "Show him your card!!" 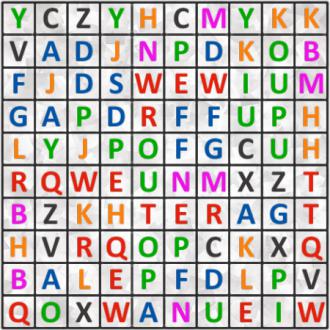 Find the first and the last name of a famous person. Text may go in all 8 directions. Length of words in solution: 6,4.
CHECK ANSWER
Brain Teasers, puzzles, riddles, mathematical problems, mastermind, cinemania...

A man went to the confessional. “Forgive me, Father, for I have sinned.”
"What is your sin, my son?” the priest asked.
"Well,” the man started, “I used some horrible language this week, and I feel absolutely terrible.”
"When did you use this awful language?” asked the priest.
"I was golfing and hit an incredible drive that looked like it was going to go over 250 yards, but it struck a power line that was hanging over the fairway and fell straight down to the ground after going only about a hundred yards.”
"Is that when you swore?”
"No, Father. After that, a squirrel ran out of the bushes and grabbed my ball in his mouth and began to run away.”
"Is that when you swore?”
"Well, no. You see, as the squirrel was running, an eagle came down out of the sky, grabbed the squirrel in his talons, and flew away!”
"Is that when you swore?” asked the amazed priest.
"No, not yet. As the eagle carried the squirrel away in his claws, it flew toward the green. And as it passed over a bit of forest near the green, the squirrel dropped my ball.”
"Did you swear then?”
"No, because as the ball felt it struck a tree, bounced through some bushes, careened off a big rock, and rolled through a sand trap onto the green and stopped within six inches of the hole.”
The priest signed, “You missed the putt, didn't you?”
This joke was reprinted from "Laugh Yourself Healthy" by Charles and Frances Hunter, with permission of Strang Communications. Copyright 2008. All rights reserved.

She says "I'm sorry, but that will only cover the rent for ten minutes, and none of my hookers work for free!"

The guy gets the room, but has nothing to fuck. He looks out on the ledge of the building and sees a pigeon.

Quietly, he opens the window, grabs the poor bird and just fucks the living shit out of it. Satisfied, he goes home.

Next week, he returns to the whorehouse, with his pay cheque. He says to the Madame, "I got lots of money now...give me a hooker!".

The Madame replies "All of them are busy now, why don't you go to the peep show and get yourself in the mood?".

The guy does, and is enjoying the show, when he turns to the guy next to him and says, "Hey, these chicks really know what they're doing huh?",

The guy responds, "Yeah, but you should have been here last week, there was this guy fucking a pigeon!"

A man is struck by a bus on a busy street in New York City. He lies dying on the sidewalk as a crowd of spectators gathers around. "A priest! Somebody get me a priest!" the man gasps. A policeman checks the crowd but finds no priest, no minister, no man of God of any kind.
"A PRIEST, PLEASE!" the dying man says again. Then out of the crowd steps a little old Jewish man of at least eighty years of age."Mr. Policeman," says the man, "I'm not a priest. I'm not even a Catholic. But for fifty years now I'm living behind St. Mary's Catholic Church on Third Avenue, and every night I'm listening to the Catholic litany. Maybe I can be of some comfort to this man."
The policeman agrees and brings the octogenarian over to the dying man. He kneels down, leans over the injured and says in a solemn voice: "B - 4. I - 19. N - 38. G - 54. O - 72."

What Would Jesus Drive?

Q: Did you know that they had automobiles in Jesus’ time?
A: Yes, the Bible says that the disciples were all of one Accord.
This joke was reprinted from "The Book of Catholic Jokes" by Deacon Tom Sheridan, with permission of ACTA Publications. Copyright 2008. All rights reserved.

Jay went to a psychiatrist. “Doc, he said, “I’ve got trouble.
Every time I get into bed I think there is somebody under it.
I get under the bed; I think there’s somebody on top of it.
Top, under, under top. I’m going crazy!”
“Just put yourself in my hands for two years,” said the shrink.
“Come to me three times a week and I’ll cure you.”
“How much do you charge?”
“A hundred dollars per visit.”
“I’ll think about it.”
Jay never went back. Some time later he met the doctor on the street.
“Why didn’t you ever come to see me again? Asked the psychiatrist.
“For a hundred buck a visit? A bartender cured me for 10 dollars.”
“Is that so! How?”
“He told me to cut the legs off the bed.”

A blonde, brunette, and redhea...