A cow's favourite prayer is “Hail Mary, full of graze…” It's even more popular than the Our Fodder.
#joke #short
Joke | Source: Pun Gents - Daily Jokes, One-liners, Groaners, Puns of the day :: Puns on Demand :: Punshine Girls and Boys!

David had been extremely anxious for years. It got to the point where his compulsive worrying was ruining his life, so he went to a psychiatrist, who recommended that David hire a professional worrier.
After he'd been working with the specialist for a few months, David's friend John noticed a change. "What happened?" John asked. "You don't worry about anything anymore."
"I hired a professional worrier!" David answered.
"That must cost a fortune," John said.
"Yes, he charges $3,000 a month," David said sheepishly.
"Three thousand dollars! How can you ever afford to pay him?" John exclaimed.
"I don't know," David said. "That's his problem."

An Apple A Day

A 5-year old boy went to visit his grandmother one day. While playing with his toys in her bedroom while grandma was dusting furniture, he looked up and said, "Grandma, how come you don't have a boyfriend?" Grandma replied, "Honey, my TV is my boyfriend. I can set in my bedroom and watch it all day long. The TV evangelists keep me company and make me feel so good.
The comedies make me laugh. I'm so happy with my TV as my boyfriend." Grandma turned on the TV and the picture was horrible. She started adjusting the knobs trying to get the picture in focus. Frustrated, she started hitting on the backside of the TV hoping to fix the problem. The little boy heard the doorbell ring so he hurried to open the door.
When he opened the door, there stood Grandma's minister. The minister said, "Hello son is your grandma home?"
The little boy replied, "Yeah, she's in the bedroom bangin' her boyfriend." 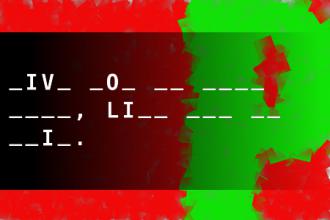 Aliens DO indeed exist. They j...

Aliens DO indeed exist. They just know better than to visit a planet that Chuck Norris is on.
#joke #short #chucknorris
Joke | Old joke from joke of the day archives - Check out other old jokes Saturday, 29 October 2011