Q: I heard that french horn players make for good kissers...
A: ...the problem is where they put their right hand.
#joke #short
Joke | Source: Comedy.com - The World Famous Comedy.com Daily Joke!

Dave: I got this great new hearing aid the other day.
Mary: Are you wearing it now?
Dave: Yup. Cost me four thousand dollars, but it's top of the line.
Mary: Wow! What kind is it?
Dave: Twelve-thirty
#joke #short
Joke

David, a Jewish boy, and Ali, a Muslim boy, are having a conversation.
Ali: I'm getting operated on tomorrow.
David: Oh? What are they going to do?
Ali: Circumcise me!
David: I had that done when I was just a few days old.
Ali: Did it hurt?
David: I couldn't walk for a year!

Begin by standing on a comfortable surface, where you have plenty of room at each side. With a 5-lb potato sack in each hand, extend your arms straight out from your sides and hold them there as long as you can.

Try to reach a full minute, and then relax. Each day, you'll find that you can hold this position for just a bit longer.

After a couple of weeks, move up to 10-lb potato sacks.

Then try 50-lb potato sacks and then eventually try to get to where you can lift a 100-lb potato sack in each hand and hold your arms straight for more than a full minute. (I'm at this level)

After you feel confident at that level, put a potato in each of the sacks.
#joke
Joke


A wealthy investor walked into a bank and said to the bank manager, "I would like to speak with Mr. Reginald Jones, who I understand is a tried and trusted employee of yours."
The banker said, "Yes he certainly was trusted. And he will be tried as soon as we catch him." 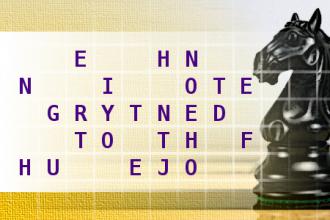 A police dog responds to an ad for work with the FBI. "Well," says the personnel director, "You'll have to meet some strict requirements. First, you must type at least 60 words per minute."

Sitting down at the typewriter, the dog types out 80 words per minute.

"Also," says the director, "You must pass a physical and complete the obstacle course."

This perfect canine specimen finishes the course in record time.

"There's one last requirement," the director continues; "you must be bilingual."

With confidence, the dog looks up at him and says, "Meow!"

What do you call a Spaniard wh...

What do you call a Spaniard who loses his car?
Carlos

Beggar: Can you spare a hundre...

Beggar: Can you spare a hundred so I can buy a loaf of bread? Passerby: Bread doesn't cost a hundred! Beggar: I know, I'm expecting some company.
#joke #short
Joke | Source: Click The City - Philippine's Leading Lifestyle and Entertainment Guide.

A young reporter is out on her first assignment, a full piece story on the local Indian reservation and it's tribe. The first day the reporter arrives and is greeted by a young Indian with one feather in his headband.

The reporter asks "What is the one feather for?"

The indian replies "One feather for one woman I sleep with."

"Oh, ok." replies the reporter, kind of thrown off guard by his response.

The chiefs son says "Come, me introduce you to Chief"

So finally, the reporter is introduced to the tribes Chief and the Chief has this long flowing fancy head-dress with feathers down to the floor and dragging behind him.

The reporter must ask: "Chief, what are all the feathers for?"

The Chief says "Each feather for each woman I sleep with."

Quickly, the Chief replies, "Deer? Deer no good, ass too high, run through bush too fast!!"

Edited by Curtis and Calamjo

Larry, a local football star, is jogging down the street when he sees a building on fire. A lady is standing on a third story ledge holding her cat in her arms.
Hey, lady, yells Larry, Throw me the cat!
No, she cries, Its too far!
I play football. I can catch him!
The smoke is pouring from the windows. The woman kisses her cat goodbye and tosses it down to the street.
Larry keeps his eye on the cat as it comes hurtling down toward him. The feline bounces off an awning and he runs into the street to catch it. He jumps six feet into the air and makes a spectacular one-handed catch. The crowd that has gathered to watch the fire breaks into cheers.
Larry does a little dance, lifts the cat above his head, wiggles his knees back and forth, then spikes the cat into the pavement.
#joke
Joke | Source: Comedy Central: Jokes - Jokes provided daily from Comedy Central's archive.

"Because," my son explained, "they say it has to have at least four characters."
#joke #short
Joke | Source: Kiwi box - today's pick Joke of the day