A young man was walking through a supermarket to pick up a few things when he noticed an old lady following him around. Thinking nothing of it, he ignored her and continued on. Finally he went to the checkout line, but she got in front of him.
"Pardon me," she said, "I'm sorry if my staring at you has made you feel uncomfortable. It's just that you look just like my son, who just died recently."
"I'm very sorry," replied the young man, "is there anything I can do for you?"
"Yes," she said, "As I'm leaving, can you say 'Good bye, Mother!' ? It would make me feel so much better."
"Sure," answered the young man.
As the old woman was leaving, he called out, "Goodbye, Mother!"
As he stepped up to the checkout counter, he saw that his total was $127.50.
"How can that be?" he asked, "I only purchased a few things!"
"Your mother said that you would pay for her," said the clerk.

Bob, a 70-year-old, extremely wealthy widower, shows up at
the Country Club with a breathtakingly beautiful and very sexy
25-year-old blonde-haired woman who knocks everyone's socks off with her
youthful sex appeal and charm and who hangs over Bob's arm and listens
intently to his every word. His buddies at the club are all aghast. At
the very first chance, they corner him and ask, 'Bob, how'd you get the
trophy girlfriend?' Bob replies, 'Girlfriend? She's my wife!' They
are knocked over, but continue to ask. 'So, how'd you persuade her to
marry you?' 'I lied about my age', Bob replies. 'What, did you tell her
you were only 50?' Bob smiles and says, 'No, I told her I was 90.'

Wisdom of Larry, the Cable Guy

1. A day without sunshine is like night.
2. On the other hand, you have different fingers.
3. 42.7 percent of all statistics are made up on the spot.
4. 99 percent of lawyers give the rest a bad name.
5. Remember, half the people you know are below average.
6. He who laughs last, thinks slowest.
7. Depression is merely anger without enthusiasm.
8. The early bird may get the worm, but the second mouse gets the cheese in the trap.
9. Support bacteria. They're the only culture some people have.
10. A clear conscience is usually the sign of a bad memory.
11. Change is inevitable, except from vending machines.
12. If you think nobody cares, try missing a couple of payments.
13. How many of you believe in psycho-kinesis? Raise my hand.
14. OK, so what's the speed of dark?
15. When everything is coming your way, you're in the wrong lane.
16. Hard work pays off in the future. Laziness pays off now.
17. How much deeper would the ocean be without sponges?
18. Eagles may soar, but weasels don't get sucked into jet engines
19. What happens if you get scared half to death, twice?
20. Why do psychics have to ask you for your name?
21. Inside every older person is a younger person wondering, "What the hell happened?"
22. Just remember -- if the world didn't suck, we would all fall off.
23. Light travels faster than sound. That's why some people appear bright until you hear them speak.
24. Life isn't like a box of chocolates. It's more like a jar of jalapenos. What you do today, might burn your ass tomorrow

"We finally have a scanda...

"We finally have a scandal in this election: Lesbogate. Bob Schieffer asked a question about is homosexuality a choice, and Kerry mention Cheney's daughter. The Cheneys are now furious at him. They say they are very proud of her daughter. They are so proud, she should never, ever be mentioned in public." -- Bill Maher

#joke
Joke | Source: Jokes of the day - Used to be Joke rating machine, but this site is dead

Funny Photo of the day - What Do You See? What Do You See? | Source : This is Photobomb - Photojackers of the World Unite!

The boy and the bible...

A little boy opened the big old family Bible and with fascination, he looked at the old pages as he turned them. Then something fell out of the Bible and he picked it up and looked at it closely. It was an old leaf from a tree that had been pressed in between the pages.

"Momma, look what I found," the boy called out.

"What have you got there?" his mother asked.

With astonishment in the young boy's voice he answered: "It's Adam's suit!"

The following statements about the Bible were written by children and have not been retouched or corrected (ie. bad spelling has been left in):

'In the first book of the Bible, Guinessis, God got tired of creating the world, so he took the Sabbath off.'

'Adam and Eve were created from an apple tree.'

'Noah built an ark, which the animals come on to in pears.'

'Lot's wife was a pillar of salt by day, but a ball of fire by night.'

'The Jews were a proud people and throughout history they had trouble with the unsympathetic Genitals.'

'Samson was a strongman who let himself be led astray by a Jezebel like Delilah.'

'Samson slayed the Philistines with the axe of the Apostles.'

'Moses led the Hebrews to the Red Sea, where they made unleavened bread which is bread without any ingredients.'

'The Egyptians were all drowned in the dessert. Afterwards, Moses went up on Mount Cyanide to get the 10 amendments.'

'The first commandment was when Eve told Adam to eat the apple.'

'The seventh commandment is thou shalt not admit adultery.'

'Moses died before he ever reached Canada.'

'Then Joshua led the Hebrews in the battle of Geritol.'

'The greatest miracle in the Bible is when Joshua told his son to stand still and he obeyed him.'

'David was a Hebrew king skilled at playing the liar. He fought with the Finklesteins, a race of people who lived in Biblical times.'

'When Mary heard that she was the mother of Jesus, she sang the Magna Carta.'

'When the three wise guys from the east side arrived, they found Jesus in the manager.'

âJesus was born because Man had an immaculate contraption.'

'St John, the blacksmith, dumped water on his head.'

âJesus said the Golden Rule, which says to do one to others before they do one to you.'

'He also explained, "A man doth not live by sweat alone."'

'It was a miracle when Jesus rose from the dead and managed to get the tombstone off the entrance.'

'The people who followed the Lord were called the 12 decibels.'

'The epistles were the wives of the apostles.'

'One of the opossums was St Matthew who was also a taximan.'

'St Paul cavorted to Christianity. He preached holy acrimony, which is another name for marriage.'

'A Christian should have only one spouse. This is called monotony.' 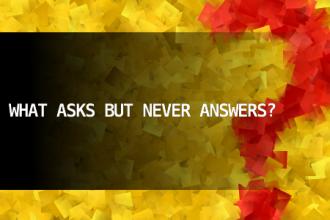 What asks but never answers?

I dont know if youve ever been to England, but as soon as they find out youre from America, they hate you. They just think theyre more sophisticated than we are. Theyre so pissed at us. You know what it is? Theyre mad because they lost the Revolutionary War, and they should be because there was only like nine of us.
#joke
Joke | Source: Comedy Central: Jokes - Jokes provided daily from Comedy Central's archive.

Who Shot the Big Buck?

Three friends decided to go hunting together. One was a lawyer, one a doctor, and the other a preacher. As they were walking, along came a big buck. The three of them shot at the same time and the buck dropped immediately. The hunting party rushed to see how big it actually was. Upon reaching the fallen deer, they found out that it was dead but had only one bullet hole.
A debate followed concerning whose buck it was. When a game warden came by, he offered to help. A few moments later, he had the answer.
He said with much confidence, "The pastor shot the buck!" The friends were amazed that he could determine that so quickly and with so little examination. The game warden just smiled. "It was easy to figure out. The bullet went in one ear and out the other."
This joke was reprinted from "The Book of Catholic Jokes" by Deacon Tom Sheridan, with permission of ACTA Publications. Copyright 2008. All rights reserved.

How do you sink an Australian ...

How do you sink an Australian submarine?
Knock on the window
Did you hear about the Australian shoplifter?
He was found crushed beneath the local supermarket.
An Australian was asked to donate to the church reroofing fund. So he gave some of the lead back
More to come!
#joke #short
Joke | Old joke from joke of the day archives - Check out other old jokes Monday, 16 February 2009

Why is a government worker lik...

Why is a government worker like a broken shotgun? It won't work and you can't fire it.
#joke #short
Joke | Old joke from joke of the day archives - Check out other old jokes Wednesday, 02 July 2008

A Rich old man, who inherited all his money from his father, one day asks his young wife: "Honey, would you still have married me if my father didn't leave me with all this money?".
His wife smiles gently and answers: "Sure honey, you know I would marry you no matter who gave you the money".
#joke #short
Joke | Old joke from joke of the day archives - Check out other old jokes Thursday, 02 July 2009