Q: What's the difference between a proctologist and a bartender?

A: The proctologist only handles one a**hole at a time.

“Even though the chef...

“Even though the chef's girlfriend was grate in many ways. She had a temper that boiled easily, was half-baked and extremely kneady.”

A woman came up behind her husband while he was enjoying his morning coffee and slapped him on the back of the head.
"I found a piece of paper in your pants pocket with the name 'Marylou' written on it," she said, furious. "You had better have an explanation."
"Calm down, honey," the man replied. "Remember last week when I was at the dog track? That was the name of the dog I bet on."'
The next morning, his wife snuck up on him and smacked him again.
"What was that for?" he complained.

Did you know that in the olden days the Swedes who used to drive on the left, later realized that this caused too many accidents with tourists used to the right, hence they decided to switch to driving on the right side, but because they were smart and thinking people, they decided to affect the switch gradually.

So they came to the conclusion that on the first of the next month all commercial vehicles like cabs and buses would start driving on the right and if all went well, all private vehicles like cars and two wheelers would switch to right the next day.
#joke
Joke | Source: Really Funny Jokes - Really Funny jokes, adult jokes, Good jokes, short funny jokes, teacher jokes, affair jokes, kids jokes, doctor jokes, funny pictures Tire throne - For Game of Thrones - new Season | Source : Jokes of The Day - By Jokes of the day visitor

Susan spoke to the insurance agent and said, "We had that barn insured for fifty thousand, and I want my money."

The agent replied, "Whoa there, just a minute. Insurance doesn't work quite like that. An independent adjuster will assess the value of what was insured, and then we'll provide you with a new barn of similar worth."

There was a long pause, and then Susan replied, "If that's how it works, then I want to cancel the life insurance policy on my husband."

Outer Space exists because it ...

Outer Space exists because it is afraid to be on the same planet as Chuck Norris.
#joke #short #chucknorris
Joke | Old joke from joke of the day archives - Check out other old jokes Monday, 26 September 2011 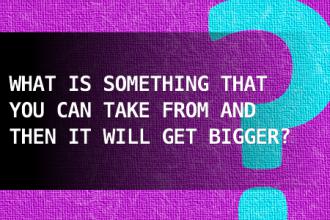 What is something that you can...

What is something that you can take from and then it will get bigger?
CHECK ANSWER
Brain Teasers, puzzles, riddles, mathematical problems, mastermind, cinemania...


The two partners in a law firm were having lunch when suddenly one of them jumped up and said, "I have to go back to the office - I forgot to lock the safe!"
The other partner replied, "What are you worried about? We're both here."

"That is true, but it was the Italians who introduced it to women!"
#joke
Joke | Old joke from joke of the day archives - Check out other old jokes Saturday, 19 February 2011

The construction foreman ordered one of his men to dig a hole 8 feet deep. But after the job was done, the boss returned and explained an error had been made and the hole wouldn't be needed. "Fill 'er up," he ordered the worker.

The worker did as he'd been told. But he ran into a problem. He couldn't get all the dirt packed back into the hole without leaving a mound on top. He went to the office and explained his problem.

"Honestly!" the foreman snorted. "The kind of help I get these days! There's obviously only one thing to do. You'll have to dig that hole deeper!"

You think when gym teachers are younger, theyre thinking, You know I want to teach, but I dont want to read?
#joke #short
Joke | Old joke from joke of the day archives - Check out other old jokes Sunday, 19 February 2012