Yo momma so dumb when I said, "Drinks on the house," she got a ladder.
#joke #short
Joke | Source: Laugh Factory Network - Watch our huge library of the best stand-up comedy videos, get information on our stand-up comedians, read our joke of the day

World Cup Celebration Fail - A fan breaks a TV while celebrating Brazil’s Julio Cesar save during penalty shootout against Chile on Saturday - link to page video is posted initially.


Why God Created Lawyers
Satan was complaining bitterly to God, "You made the world so that it was not fair, and you made it so that most people would have to struggle every day, fight against their innate wishes and desires, and deal with all sorts of losses, grief, disasters, and catastrophes. Yet people worship and adore you. People fight, get arrested, and cheat each other, and I get blamed, even when it is not my fault. Sure, I'm evil, but give me a break. Can't you do something to make them stop blaming me?"
And so God created lawyers.

An old man sitting at the mall watched a teenager intently. The teenager had spiked hair in all different colors: green, red, orange, and blue. The old man kept staring at him.
When the teenager was tired of being stared at, he sarcastically asked, "What's the matter, old man? Never did anything wild in your life?"
The old man did not bat an eye when he responded, "Got drunk once and had sex with a peacock. I was just wondering if you were my son." Camel riders happy faces - Just hoping for ride to end soon | Source : Jokes of The Day - By Jokes of the day visitor

A Georgia state trooper pulls over a pickup on I-75 and says to the driver,

It was like falling in love with a girl who was just throwing up all over herself -- softly holding her hair back and whispering to her that everything was going to be alright. To me, thats what the last eight years were like, here in America: projectile vomiting all over yourself as the rest of the world rubbed your back, saying, Sssshhh, thats it. Let it all out.
#joke
Joke | Old joke from joke of the day archives - Check out other old jokes Thursday, 01 July 2010 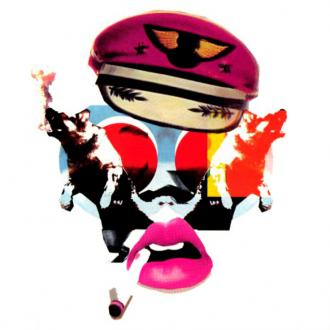 Which musician band has an album with a cover as in the picture?
CHECK ANSWER
Brain Teasers, puzzles, riddles, mathematical problems, mastermind, cinemania...

There was once a sheep farmer who had a French farmhand working with him to help castrate his sheep.

As the farmer castrated the first sheep, the French farmhand took the parts and was about to throw them into the trash.

"No!" yelled the farmer, "Don't throw those away! My wife fries them up, and we eat them, they're delicious! They're called Sheep Fries!"

The farmhand saved the parts and took them to the farmer's wife who cooked them up for supper. This went on for three days....and each evening they had Sheep Fries for supper.

On the fourth night the farmer came in to the house for supper.

He asked his wife where the farmhand was, and she replied, "It's the strangest thing! When he came in and asked what was for supper, I told him French Fries, and he ran like hell!"

Ralphie May - Dora the Explorer

Have you seen this show? If you havent, its about a five-year-old little Mexican girl thats always lost. It should be called Dora the Amber Alert.
#joke #short
Joke | Old joke from joke of the day archives - Check out other old jokes Sunday, 01 July 2012

A Russian couple was walking down the street in St. Petersburg the other night, when the man felt a drop hit his nose. "I think it's raining," he said to his wife.

"No, that felt more like snow to me," she replied. "No, I'm sure it was just rain, he said." Well, as these things go, they were about to have a major argument about whether it was raining or snowing. Just then they saw a minor communist party official walking toward them. "Let's not fight about it," the man said, "let's ask Comrade Rudolph whether it's officially raining or snowing."

As the official approached, the man said, "Tell us, Comrade Rudolph, is it officially raining or snowing?"

"It's raining, of course," he answered and walked on. But the woman insisted: "I know that felt like snow!" To which the man quietly replied: "Rudolph the Red knows rain, dear!"

Im thinking of a presidential bid; currently indexing and cross-referencing everyone Ive tweeted my junk to. 8x10s available.
#joke #short
Joke | Old joke from joke of the day archives - Check out other old jokes Friday, 01 July 2011