Yo mamma is so stupid, she stopped her car at a stop sign and she's still waiting for it to turn green.
#joke #short
Joke | Source: Laugh Factory Network - Watch our huge library of the best stand-up comedy videos, get information on our stand-up comedians, read our joke of the day

SURPRISE MILK PRANK! (Slow Mo Prank Show) - How would you react if you took a sip of milk when you were expecting soda? Let's go to the slo mo! - link to page video is posted initially.

A Horse Walks Into a Bar...

A horse walks into a bar, and the bartender asks, "Why the long face?"

Funny Photo of the day - Relaxing in comfortable position Relaxing in comfortable position - Don't wake her up! | Source : Jokes of The Day - By Jokes of the day visitor

John went to the doctor one day. " Dr. I don't know what to do. The women are scared of me. My penis is too long. What can I do?" The doctor meassured it and it was 24 inches long. "Well, you have 2 choices. One, you can have it surgically downsized. Or two, you can go ask a certain frog to marry you." The man instantly said, "I'm not asking a frog to marry me!" "It's okay, he will say no. But it's alot easier than cutting it." 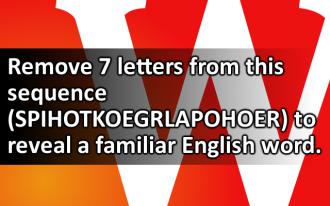 Remove 7 letters from this s...

Jack decided to go skiing with his buddy, Bob. So they loaded up Jack's minivan and headed north. After driving for a few hours, they got caught in a terrible blizzard. So they pulled into a nearby farm and asked the attractive lady who answered he door if they could spend the night. "I realize it's terrible weather out there and I have this huge house all to myself, but I'm recently widowed," she explained. "I'm afraid the neighbors will talk if I let you stay in my house."
"Don't worry," Jack said. "We'll be happy to sleep in the barn. And if the weather breaks, we'll be gone at first light." The lady agreed, and the two men found their way to the barn and settled in for the night. Come morning, the weather had cleared, and they got on their way. They enjoyed a great weekend of skiing.
But about nine months later, Jack got an unexpected letter from an attorney. It took him a few minutes to figure it out, but he finally determined that it was from the attorney of that attractive widow he had met on the ski weekend. He dropped in on his friend Bob and asked, "Bob, do you remember that good-looking widow from the farm we stayed at on our ski holiday up north about 9 months ago?"
"Yes, I do." said Bob
"Did you, er, happen to get up in the middle of the night, go up to the house and pay her a visit?"
"Well, um, yes," Bob said, a little embarrassed about being found out "I have to admit that I did."
"And did you happen to use my name instead of telling her your name?"
Bob's face turned beet red and he said, "Yeah, look, I'm sorry, buddy. I'm afraid I did." "Why do you ask?"
"She just died and left me everything."

I dont care about the museum, I only care that people think Im the kind of guy who goes to museums.
#joke #short
Joke | Old joke from joke of the day archives - Check out other old jokes Monday, 15 August 2011

Chck Norris listens to "Requiem for a Tower" when he eats waffles.
#joke #short
Joke | Old joke from joke of the day archives - Check out other old jokes Monday, 15 August 2011