(1)  Fine: This is the word women use to end an argument when they are right and you need to shut up.

(2) Five Minutes: If she is getting dressed, this means a half an hour. Five minutes is only five minutes if you have just been given five more minutes to watch the game before helping around the house.

(3) Nothing: This is the calm before the storm. This means something, and you should be on your toes. Arguments that begin with nothing usually end in fine.

(5) Loud Sigh: This is actually a word, but is a non-verbal statement often misunderstood by men. A loud sigh means she thinks you are an ass and wonders why she is wasting her time standing here and arguing with you about nothing. (Refer back to # 3 for the meaning of nothing.)

(6) That's Okay: This is one of the most dangerous statements a woman can make to a man. That's okay means she wants to think long and hard before deciding how and when you will pay for your mistake.

(7) Thanks: A woman is thanking you, do not question, or faint. Just say you're welcome. (I want to add in a clause here - This is true, unless she says 'Thanks a lot' - that is PURE sarcasm and she is not thanking you at all. DO NOT say 'you're welcome'. That will bring on a 'whatever').

(9) Don't worry about it, I got it: Another dangerous statement, meaning this is something that a woman has told a man to do several times, but is now doing it herself. This will later result in a man asking 'What's wrong?' For the woman's response refer to #3.

A young Texan grew up wanting to be a lawman. He grew up big, 6' 2", strong as a longhorn, and fast as a mustang. He could shoot a bottle cap tossed in the air at 40 paces.

When he finally came of age, he applied to where he had only dreamed of working: the West Texas Sheriff's Department.

After a series of tests and interviews, the Chief Deputy finally called him into his office for the young man's last interview.

The Chief Deputy said, "You're a big strong kid and you can really shoot. So far your qualifications all look good, but we have, what you might call, an "Attitude Suitability Test", that you must take before you can be accepted.

We just don't let anyone carry our badge, son."

Then, sliding a service pistol and a box of ammo across the desk, the Chief said, "Take this pistol and go out and shoot: six illegal aliens, six lawyers, six meth dealers, six Muslim extremists, six Democrats, and a rabbit."

"Why the rabbit?" queried the applicant.

"You pass," said the Chief Deputy. "When can you start?"
#joke #lawyer
Joke | Source: Florida Dude - Welcome To The Beach - new jokes every day

A doctor examined a woman, ...

A doctor examined a woman, took the husband aside, and said, "I don't like the looks of your wife at all."
"Me neither, Doc," said the husband. "But she's a great cook and really good with the kids."

“Why was the broom having a bad day? He didn't get enough sweep.” If you have to charge your phone on place like this - You have to use your head! | Source : Jokes of The Day - By Jokes of the day visitor

Q. What's the name of a face lotion developed for Jewish women?
A. Oil of Oy Vey

I thought I saw a pig wolf, but it was just a pork-lupine.
#joke #short
Joke | Source: Pun Gents - Daily Jokes, One-liners, Groaners, Puns of the day :: Puns on Demand :: Punshine Girls and Boys! 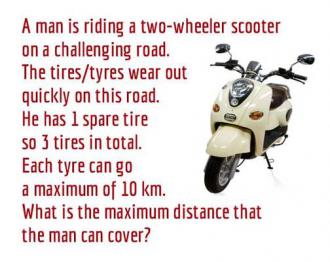 What is the maximum distance that the man can cover?

A man is riding a two-wheeler scooter on a challenging road. The tires/tyres wear out quickly on this road. He has 1 spare tire so 3 tires in total. Each tyre can go a maximum of 10 km. What is the maximum distance that the man can cover?
CHECK ANSWER
Brain Teasers, puzzles, riddles, mathematical problems, mastermind, cinemania...

Two judges from a small county

Two judges from a small county happen to be stopped for speeding on the same day. They agree that there's no point in calling the state Supreme Court for a visiting judge; they'll just go ahead and hear each other's case.
The next morning, one judge takes the bench, the other sits at counsel table. The first judge admits he's guilty, and the second judge suspends the fine and court costs for him.
They then switch places, the second judge pleads guilty as well, but the other judge fines him $200 plus all court costs.
The second judge is exceedingly upset: "I suspended your fine and costs and you go and give me the maximum!"
The first judge responds: "Well, look at the increase we've just had for this crime. SOMEBODY has to do something about it!"

The owner of a drugstore walks

The owner of a drugstore walks in to find a guy leaning heavily against a wall with an odd look on his face.
The owner asks the clerk, "What's with that guy over there by the wall?"
The clerk says, "Well, he came in here at 7 A.M. to get something for his cough. I couldn't find the cough syrup, so I gave him an entire bottle of laxatives."
The owner says, "You idiot! You can't treat a cough with laxatives!"
The clerk says, "Oh yeah? Look at him-he's afraid to cough!"


Why did the chicken cross the Mobius strip? To get to the same side.
Why did the chicken cross the road? Issac Newton: Chickens at rest tend to stay at rest, chickens in motion tend to cross roads.
A neutron walks into a bar; he asks the bartender, "How much for a beer?" The bartender looks at him, and says "For you, no charge."
Two fermions walk into a bar. One orders a drink. The other says "I'll have what he's having."
Two atoms bump into each other. One says "I think I lost an electron!" The other asks, "Are you sure?", to which the first replies, "I'm positive."
Renee Descartes walks into a bar, the bartender says "sir can I get you a martini "Descartes says "I don't think..." and he disappears
Where does bad light end up? Answer: In a prism!
Heisenberg is out for a drive when he's stopped by a traffic cop. The cop says "Do you know how fast you were going?" Heisenberg says "No, but I know where I am."

Yo mama is so ugly she walked into a huanted house and came out with an application.

Q: Why did the driver put a stove in his car?

Q: Why are ghosts bad liars?

Q: Why are ghosts bad liars?
A: You can see right through them.
#joke #short
Joke | Source: Laugh Factory Network - Watch our huge library of the best stand-up comedy videos, get information on our stand-up comedians, read our joke of the day