A group of hikers were being l

A group of hikers were being led through the wilderness by a guide. On the third day, the hikers noticed that they had been travelling in circles.
"We're lost!" One of the men complained. "I thought you said you were the best guide in the United States."
"I am," the guide answered, "but I think we may have wandered into Canada."

This is what happens when you DON'T LISTEN - link to page video is posted initially.

“I visited an acupuncturist today. I was done in under an hour, he was quick and to the point.”

I Don't Want to Go

Thanksgiving day was approaching and the family had received a Thanksgiving card with a painting of a pilgrim family on their way to church.
Grandma showed the card to her small grandchildren, observing: "The Pilgrim children liked to go to church with their mothers and fathers."
"Oh yeah?" her young grandson replied, "So why is their dad carrying that rifle?"
#joke #thanksgiving
Joke | Source: Belief net - Joke of the day, features on religion, spirituality, faith Volkswagen Camper Tent | Source : Jokes of The Day - By Jokes of the day visitor

One day an employee came in to

One day an employee came in to work with both of his ears bandaged.
When his boss asked him what happened, he explained:
"Yesterday I was ironing a shirt when the phone rang
and I accidentally answered the iron instead of the phone!"

"Well," the boss said, "that explains one ear, but what
about the other?" "They called back!"

"Cash, check or charge?" I ask

"Cash, check or charge?" I asked, afterfolding items the woman wished to purchase. As she fumbled forher wallet I noticed a remote control for a televisionset in her purse.
"So, do you always carry your TV remote?" I asked.
"No," she replied, "but my husband refused tocome shopping with me, so I figured this was the most legal evilthing I could do to him." 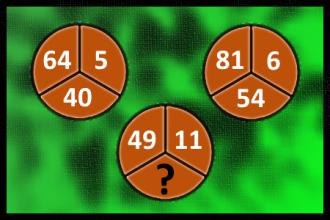 Which number should replace the question mark?

When the good Lord was making the world, he called Man aside and bestowed upon him 20 years of normal sex life. Man was horrified, but the Creator refused to budge. Then the Lord called the Monkey and gave him 20 years.

"May I have the other 10 years?" asked Man. The Monkey agreed.

The Lord called the Lion next and also gave him 20 good years. The Lion also only wanted 10, so again Man asked for the remaining ten. Then came the Donkey, who was also granted 20 years. Like the others, 10 was more than enough. Man again asked for the spare ten years and got them.

If stupidity were a crime, he'd be number one on the Most Wanted list.
If the government ever declared war on stupidity, he'd get nuked.
If there were a merciful God he'd be dead by now.
If they each had half a brain, they'd still only have half a brain.
If they knock heads, implosion will suck all the air out of the room.
If what you don't know can't hurt you, she's practically invulnerable.
If you called him a wit, you'd be half right.
If you give him a penny for his thoughts, you get change back.
If you stand close enough to him, you can hear the ocean.
Ignorant, and proud of it.
Immune from any serious head injury.
Immune to caffeine and all other stimulants.
In a tub of Preparation H, he'd shrink down to thumb size.
In his optimum environment, he'd be locked in a life and death struggle with mushrooms.
In line for brains, thought they said pains, and said, "No, thanks".

George and Lenny decide to cross North America in a hot air balloon. However, neither were particularly experienced balloonists, and Lenny's mind quickly drifted from navigation to thoughts of how clouds look like cuddly little bunny rabbits. Upon realizing that they were lost, George declared, "Lenny -- we are going to have to lose some altitude so we can figure out where we are."

George lets some hot air out of the balloon, which slowly descended below the clouds, but he still couldn't tell where they were. Far below, they could see a man on the ground. George lowered the balloon, to ask the man their location.

When they were low enough, George called down to the man, "Hey, can you tell us where we are?" The man on the ground yelledback, "You're in a balloon, about 100 feet up in the air."

George Called down to the man, "You must be a lawyer." "Gee, George," Lenny replied, "How can you tell?" George answered, "Because the advice he gave us is 100% accurate, and is completely useless".

The man called back up to the balloon, "You must be a client." George yelled back, "Why do you say that?" "Well," the man replied, "you don't know where you are, or where you are going. You got into your predicament through a lack of planning, and could have avoided it by asking for help before you acted. You expect me to provide an instant remedy. The fact is you are in the exact same position you were in before we met, but now it is somehow my fault."

Q: Why did the blond have rect

Q: Why did the blond have rectangle breasts?
A: Because she forgot to take the tissue out of the box.
#joke #short
Joke | Source: Laugh Factory Network - Watch our huge library of the best stand-up comedy videos, get information on our stand-up comedians, read our joke of the day

Q: What's black and white and red all over?

A: Mimes in a chainsaw fight.

#joke #short
Joke | Old joke from joke of the day archives - Check out other old jokes Thursday, 21 May 2015

What did one lesbian vampire say to the other?. Same time next month?.
#joke #short
Joke | Old joke from joke of the day archives - Check out other old jokes Friday, 24 June 2011