“I used my skeleton k

“I used my skeleton key to get into the haunted house.”

A man and his wife were making

A man and his wife were making their first doctor visit prior to the birth of their first child. After everything checked out, the doctor took a small stamp and stamped the wife's stomach with indelible ink.
The couple was curious about what the stamp was for, so when they got home, he dug out his magnifying glass to try to see what it was.
In very tiny letters, the stamp said, "When you can read this without a needing a magnifying glass, come back and see me."

Ultimate Girls Fails of the Year 2015 - Best girls fails of 2015. After hours of deliberation, we've narrowed it down and put together what some will consider the best fail compilation of the year: the Ultimate Girls Fails of 2015. Grab some popcorn, get comfortable and let us know your thoughts down below. And as always, SALUTE! - link to page video is posted initially.

Two vampire bats are hanging upside down in a cave. One of the bats feels rather hungry. "Let's go and find some blood", he suggests.

"I don't think you can get any blood this time of the day", says the other bat. "Well, I want some blood and I want it now!", says the first bat and prepares to take off. "Are you coming or what?"

"Don't be stupid, you'll just waste your time", says the second bat. So the first bat flies anyway. After a few minutes he is back with blood smeared all over his face.


A deputy police officer responded to a report of a barroom disturbance. The "disturbance" turned out to be well over six feet tall and weighed almost 300 pounds. What's more, he boasted that he could whip the deputy and Muhammad Ali too.
Said the policeman, "I'll bet that you're also an escape artist-probably better than Houdini."
The giant nodded.
"If I had some chains," the deputy continued, "you could show us how strong you really are. But all I've got is a set of handcuffs. Why don't you see just how quickly you can break out of them?"
Once in the cuffs, the man puffed, pulled and jerked for four minutes. "I can't get out of these," the giant growled.
"Are you sure?" the deputy asked. The fellow tried again. "Nope," he replied. "I can't do it."
"In that case," said the deputy, "you're under arrest."

Funny Photo of the day - Multitasking Multitasking - A man reading a newspaper while riding a bicycle and holding a wooden tray on his head in Egypt | Source : Jokes of The Day - By Jokes of the day visitor

Puns about fruit are banned as

Puns about fruit are banned as ‘ates peach‘. They pit the stoners against the fuzz.
#joke #short
Joke | Source: Pun Gents - Daily Jokes, One-liners, Groaners, Puns of the day :: Puns on Demand :: Punshine Girls and Boys!

DO NOT READ if you are easily offended.

pants pocket. But the pocket had a hole, so the buttons fell

into his shoe. Unfortunately, the shoe sole also had a hole,

so he lost the buttons. Since pockets with holes, holes

without buttons, and shoe soles with holes are useless, the

man ripped the buttonholes out of his shirt and

with the soles of his shoes. After looking in a mirror at the

holes in his clothing, he decided to toss his clothes in the

A policeman observed all this and asked the man for

The man produced a document that he was an ordained minister

of the gospel. So, of course, the policeman promptly

escorted him to a mental institution.

The minister protested violently, asking why he was

"Look, it's the best place for you now," the policeman

replied, "Anyone claiming to be a preacher, but who doesn't

save souls or wear holy clothes has probably lost his

#joke #policeman
Joke | Source: Jokes of the day - Taken from Bartender's guide to Jokes, Drinks, and Poker - once good site, no longer active. 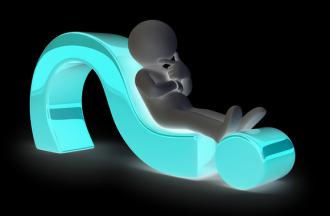 I am worthless, yet when add...

I am worthless, yet when added to others I add worth. I confounded the ancient Greeks, yet I changed men's understanding. What am I?
CHECK ANSWER
Brain Teasers, puzzles, riddles, mathematical problems, mastermind, cinemania...

At a church meeting, a very wealthy man rose to tell the rest of those present about his Christian faith.
"I'm a millionaire," he said, "and I attribute it all to the rich blessings of God in my life. I remember that turning point in my faith. I had just earned my first dollar and I went to a church meeting that night. The speaker was a missionary who told about his work. I knew that I only had a dollar bill and I had to either give it all to God's work or give nothing at all. So at that moment, I decided to give my whole dollar to God. I believe that God blessed that decision, and that is why I am a rich man today."
When he finished and moved toward his seat, there was an awed silence As he sat down, a little old lady sitting in the same pew leaned over and said to him, "I dare you to do it again."
#joke
Joke | Old joke from joke of the day archives - Check out other old jokes Saturday, 10 October 2015

According to a news report, a...

According to a news report, a certain private school in Washington recently was faced with a unique problem. A number of 12-year-old girls were beginning to use lipstick and would put it on in the bathroom. That was fine, but after they put on their lipstick they would press their lips to the mirror leaving dozens of little lip prints. Every night,the maintenance man would remove them and the next day, the girls would put them back. Finally the principal decided that something had to be done. She called all the girls to the bathroom and met them there with the maintenance man.... She explained that all these lip prints were causinga major problem for the custodian who had to clean the mirrors every night. To demonstrate how difficult it had been to clean the mirrors, she asked the maintenance man to show the girls how much effort was required. He took out a long-handled squeegee, dipped it in the toilet, and cleaned the mirror with it. Since then, there have been no lip prints on the mirror. There are teachers, and then there are educators...
#joke
Joke | Old joke from joke of the day archives - Check out other old jokes Friday, 05 June 2015

Yo momma so dumb when I said, "Drinks on the house," she got a ladder.
#joke #short
Joke | Old joke from joke of the day archives - Check out other old jokes Tuesday, 01 July 2014

A man phones home from his off...

A man phones home from his office and says to his wife, "I have the chance to go fishing for a week. It's the opportunity of a lifetime. I have to leave right away. Pack my clothes, my fishing equipment, and my blue silk pajamas. I'll be home in an hour to pick them up."
The man rushes home to grab everything. He hugs his wife, apologizes for the short notice, and then hurries off.
A week later, the man returns and his wife asks, "Did you have a good trip, dear?"
The man replies, "Yep, the fishing was great...but you forgot to pack my blue silk pajamas."
His wife smiles and says, "Oh, no I didn't...I put them in your tackle box.
#joke
Joke | Old joke from joke of the day archives - Check out other old jokes Thursday, 10 December 2009

In a fight between Batman and ...

In a fight between Batman and Darth Vader, the winner would be Chuck Norris.
#joke #short #chucknorris
Joke | Old joke from joke of the day archives - Check out other old jokes Saturday, 10 December 2011