“Is an anthill caught

“Is an anthill caught in a twister an anticyclone?”

Try To Settle The Dispute


There was once a Scotsman and an Englishman who lived next door to each other. The Scotsman owned a hen and each morning would look in his garden and pick up one of his hen's eggs for breakfast.
One day he looked outside and saw that the hen had laid an egg in the Englishman's garden. He was about to go next door when he saw the Englishman pick up the egg. The Scotsman ran up to the Englishman and told him that the egg belonged to him because he owned the hen. The Englishman disagreed because the egg was laid on his property.
They argued for a while until finally the Scotsman said, "In my family we normally solve disputes by the following actions: I punch you in the nose and note how long it takes you to recover, then you punch me in the nose and note how long it takes for me to recover, whomever recovers quicker wins the egg."
The Englishman agreed to this and so the Scotsman held the heaviest object he could find, took a few steps back, then ran toward the Englishman and punched him as hard as he could in the nose. The Englishman fell to the ground and was howling in agony and holding his nose for thirty minutes.
Eventually the Englishman stood up and said, "Now it's my turn to punch you."
The Scotsman said, "Keep the lousy egg."

My neighbor rang on my doorbell at 3 am... can you believe it!?

Luckily I was still up playing the drums.

Said the FBI agent to the bank

Said the FBI agent to the bank teller after the bank was robbed for the third time by the same bandit: "Did you notice anything special about the man?"
"Yes, he seemed better dressed each time!"

I saw the light!

Mr. and Mrs. Thomas were both 102 years old. They had been married 74 years. The local television station sent a news crew out to interview them.

"What we need to do," the reporter explained, "is to interview you separately. It just seems to make for a better write-up, when we do it that way. So, if you don't mind waiting, Mrs. Thomas, we'll go out on the porch with your husband and visit with him for a few moments first."

After they were settled on the porch, the reporter began his interview. "Mr. Thomas, I know you get tired of people asking you this, but what do you think is the cause of your longevity?"

"Well..." Mr. Thomas drawled thoughtfully. "I get up early every morning. I eat pretty good, you know, garden food and such....and...oh, yeah! God talks to me!"

The reporter stared up at him to see if he was kidding. "You mean God actually talks to you?"

"Yep," the old-timer replied sincerely. "We're pretty close. In fact, when I have to get up and go to the bathroom during the night, God even turns the light on for me."

The reporter quickly excused himself and went in search of Mrs. Thomas. "I don't mean anything unkind by this, Ma'am, but is Mr. Thomas okay...mentally, I mean?"

"Why?" she asks curiously.

"Well, he says that when he goes to the bathroom at night, God turns on the light for him," the reporter explained.

"Oh, damn!" Mrs. Thomas said, irritably. "Has that old fart been pissin' in the refrigerator again?" 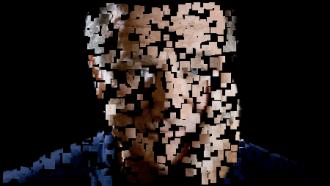 Who is the mysterious person i...

A blind man was describing his

A blind man was describing his favorite sport, parachuting.When asked how this was accomplished, he said that things were alldone for him:
"I am placed in the door and told when to jump"
"My hand is placed on my release ring for me, and out I go"
"But how do you know when you are going to land?" he was asked.
"I have a very keen sense of smell and I can smell the trees and grasswhen I am 300 feet from the ground" he answered.
"But how do you know when to lift your legs for the final arrival onthe ground?" he was again asked.
He quickly answered "Oh, the dog's leash goes slack".

What did one lesbian vampire say to the other?. Same time next month?.
#joke #short
Joke | Old joke from joke of the day archives - Check out other old jokes Friday, 24 June 2011