Interviewer: "Your resume says you take things too literally."
Me: “When the hell did my resume learn to talk?”

Old enough to do as I please

A boy, frustrated with all the rules he had to follow, asked his father, "Dad, how soon will I be old enough to do as I please?"
The father answered immediately, "I just don't know, son. No male has ever lived that long yet."

One day a little girl was sitting and watching her mother do the dishes at the kitchen sink. She suddenly noticed that her mother had several strands of white hair sticking out in contrast on her brunette head.
She looked at her mother and inquisitively asked, "Why are some of your hairs white, Mom?"
Her mother replied, "Well, every time that you do something wrong and make me cry or unhappy, one of my hairs turns white."
The little girl thought about this revelation for a while and then said, "Momma, how come ALL of grandma's hairs are white?"

The best way to end a fight...

Two women were at a bar. One looked at the other and said, "You know, eighty percent of all men think the best way to end a fight is to make love."

"Well," said the other woman, "if that was true, that would certainly revolutionize the game of hockey!"

The leading causes of death in... 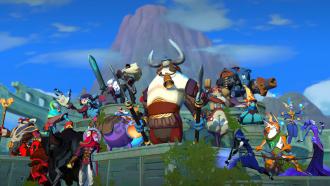 Ive got a three-year-old son. Its like living with a crazy midget.
#joke #short
Joke | Old joke from joke of the day archives - Check out other old jokes Thursday, 12 January 2012

A man asked his wife what she'd like for her birthday. "I'd love to be six again," she replied. On the morning of her birthday, he got her up bright and early and off they went to a local theme park. What a day! He put her on every ride in the park: the Death Slide, the Screaming Loop, the Wall of Fear, everything there was! Wow!
Five hours later she staggered out of the theme park, her head reeling and her stomach upside down. Right to a McDonald's they went, where her husband ordered her a Happy Meal with extra fries and a refreshing chocolate shake. Then it was off to a movie, the latest Star Wars epic, a hot dog, popcorn, soda, and M&Ms. What a fabulous adventure!
Finally she wobbled home with her husband and collapsed into bed. He leaned over and lovingly asked, "Well, dear, what was it like being six again?"
One eye opened. "You idiot, I meant my dress size."
The moral of this story: Even when the man is listening, he's still gonna get it wrong.

The defense huddled around the coach and he asked excitedly, "Who stopped the elephant?"

"I did," said the centipede.

"Who stopped the rhino?"

"Uh, that was me too," said the centipede.

"And how about the hippo? Who hit him for a 5 yard loss?"

"Well, that was me as well," said the centipede.

"So where were you during the first half?" demanded the coach.

"Well," said the centipede, "I was having my ankles taped."