A Rabbi was walking, slowly, out of a shul in New York, when a gust of wind blew his hat off and down the street. He was an old man, who walked with the aid of a cane, and he couldn't run after the hat. Across the street, a young gentile man saw what was happening, rushed over and grabbed the hat. He then returned it to the Rabbi.

"I don't think I could have retrieved my hat by myself," said the Rabbi. "Thank you very much!" He then placed his hand on the man's shoulder and said, "May God bless you."

The young man thought to himself, "I've been blessed by the Rabbi, this must be my lucky day!" He decided then and there to go to the racetrack. In the first race he noticed a horse named 'Stetson' at 20 to 1. He bet $50 and, sure enough, the horse came in first. In the second race, a horse named 'Fedora' was at 30 to 1, so he bet all his money on that horse. Fedora came in first, as well.

At the end of the day the man returned home to his wife. She asked him where he'd been. He explained about catching the Rabbi's hat, and being blessed by him, and how he then went to the track and did so well betting on horses named after hats.

"I lost it all in the ninth race. I bet on a horse named 'Chateau' and it lost."

"It doesn't matter," he said, "the winner was some Japanese horse named 'Yarmulka'."

I am forty-four years old and I would like to meet a man my age with no bad habits.

An elderly woman walked into the main branch of Chase Manhattan Bank building holding a large paper bag in her hand. She told the young man at the window that she wished to take the 3 million dollars she had in the bag and open an account with the bank. She said that first, though, she wished to meet the President of Chase Manhattan Bank due to the large amount of money involved.

The teller seemed to think that was a reasonable request and, after opening the bag and seeing the bundles of $1,000 bills which amounted to $3 million, he phoned the President to make the appointment for the woman.

The woman was escorted upstairs to the President's office. Introductions were made and she said that she liked to get to know the people she did business with on a more personal level. The bank President then asked how did she come into such a large sum of money.

"Was it an inheritance?" he asked.

"Was it from playing the Stock Market?" he inquired.

He was quiet for a moment, trying to figure out how the elderly lady came into such a large sum of money.

"I won it by betting" she stated.

Seeing his confusion, she explained that she would bet on different things with people. All of a sudden she said, "I'll bet you $25,000 that by 10 o'clock tomorrow morning your balls will be square."

The bank President figured that she must be off her rocker and decided to taker her up on the bet. He didn't see how he could lose. For the rest of the day, he was very careful. He decided to stay home that evening and take no chances, since there was $25,000 at stake.

When he got up in the morning and took his shower, he checked to make sure everything was okay. There was no difference in his scrotal appearance. He looked the same as he always had. He went to work and waited for the woman to come in at 10 o'clock, humming as he went. He knew, this would be a lucky day-how often did he get handed $25,000 for doing nothing?

At 10 o'clock sharp the woman was shown into his office. With her was a man. Then the bank President asked what the other man was doing in the office with her, and she explained to the President that he was her Lawyer and she always took him along on bets when large sums of money was at stake.

The lady seemed to accept this, but requested that she be able to see for herself. The bank President thought that this was a reasonable request and dropped his trousers. She instructed him to bend over, and she grabbed a hold of him. Sure enough, everything was fine. His balls were not square.

The bank President then looked up and saw the Lawyer standing across the room banging his head against the wall.

An old lady had always wanted to travel abroad. Now that she was getting on in years, she thought she would really like to do so before she died.

Until now, she'd never even been out of the country. So she began by going in person to the Passport Office and asking how long it would take to have one issued.

"You must take the loyalty oath first," responded the passport clerk. "Raise your right hand, please. "The old gal raised her right hand.

"Do you swear to defend the Constitution of the United States against all its enemies, domestic or foreign?" was the first question.

The little old lady's face paled and her voice trembled as she asked in a small voice, "Uhhh . . . all by myself?"

How do you make a hot dog stand?
Steal its chair. 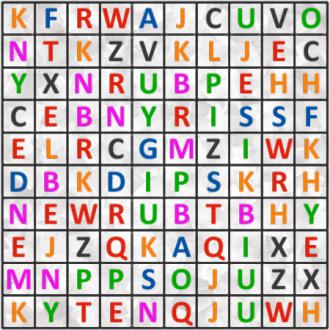 Find the first and the last name of a famous person. Text may go in all 8 directions. Length of words in solution: 6,7.
CHECK ANSWER
Brain Teasers, puzzles, riddles, mathematical problems, mastermind, cinemania...

A police officer pulls over a speeding car. The officer says, "I clocked you at 120 kilometres per hour, sir."

The driver says, "Gee, officer, I had it on cruise control at 100 kilometres, perhaps your radar needs calibrating."

Not looking up from her knitting the wife says sweetly from the passenger seat, "Now don't be silly, dear, you know that this car doesn't have cruise control."

As the officer writes out the ticket, the driver looks over at his wife and growls, "Can't you keep your mouth shut for once?"

The wife smiles demurely and says, " You should be thankful your radar detector went off when it did."

As the officer makes out the second ticket for the illegal radar detector unit, the man glowers at his wife and says through clenched teeth, Darn it, woman, can't you keep your mouth shut?"

The officer frowns and says, "And I notice that you're not wearing your seat belt, sir. That's an automatic $75 fine."

The driver says, "Yeah, well, you see officer, I had it on, but took it off when you pulled me over so that I could get my license out of my back pocket"

And as the police officer is writing out the third ticket the driver turns to his wife and barks, "WHY DON'T YOU SHUT UP??"

The officer looks over at the woman and asks, "Does your husband always talk to you this way, Ma'am?" "Oh, heavens no, officer! Only when he's been drinking."

Two cannibals caught a clown a...

Two cannibals caught a clown and decided to have him for dinner. After taking a bite, one cannibal turned to the other and said, "Does this taste funny to you?"
#joke #short
Joke | Source: Click The City - Philippine's Leading Lifestyle and Entertainment Guide.

Stefan it quick before it bites me!

One stepfather and I'll let you have it!

9. Outgoing faxes have tobacco stains on them.

8. The six front keys have rotted out.

7. The extra RAM slots have Dodge truck parts installed in them.

6. The numeric keypad only goes up to six.

3. There is a Skoal can in the CD-ROM drive.

2. The keyboard is camouflaged.

And, The Number One Way To Tell If A Redneck Has Been Working On A Computer...

The mouse is referred to as a "critter".

i work in a busy office where a computer going down causes quite an inconvenience. Recently one of our computers not only crashed, it made a noise that sounded like a heart monitor. "This computer has flat-lined," a co-worker called out with mock horror.

Why is it so difficult to find men who are caring, sensitive, and good-looking?

They already have boyfriends.