A newly ordained priest, nervous about hearing confessions, finally asks an older priest to observe how he does and give some tips. After listening in on the second confession, the older priest suggested that the younger man fold his arms, maybe rub his chin with one hand while saying phrases like "I see" or "I understand" or "Yes, my child. Go on".
The young priest puts the suggestions into practice and later tells the older priest how much it has helped getting more information from his flock.
"You've done well," said the older man. "Isn't that much better than slapping your knee and yelling 'No way! What happened next?'"

Groups of animals should be se

Groups of animals should be seen and not herd.
#joke #short
Joke | Source: Pun Gents - Daily Jokes, One-liners, Groaners, Puns of the day :: Puns on Demand :: Punshine Girls and Boys! Salami shisha - Are you vegetarian if you use it? | Source : Jokes of The Day - By Jokes of the day visitor

Animated GIF - When you sit there for a moment and are just like...

Whom should i marry? Marry the one who…

Whom should i marry? Marry the one who…
#joke #short
Joke 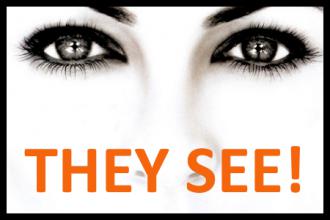 Law of Mechanical Repair: After your hands become coated withgrease your nose will begin to itch or you'll have to pee.
Law of the Workshop: Any tool, when dropped, will roll to theleast accessible corner.
Law of probability: The probability of being watched is directlyproportional to the stupidity of your act.
Law of the Telephone: When you dial a wrong number, you never geta busy signal.
Law of the Alibi: If you tell the boss you were late for workbecause you had a flat tire, the very next morning you will have a flattire.
Variation Law: If you change lines (or traffic lanes), the oneyou were in will start to move faster than the one you are in now. (worksevery time)
Bath Theorem: When the body is fully immersed in water, thetelephone will ring.
Law of Close Encounters: The probability of meeting someone youknow increases when you are with someone you don't want to be seen with.
Law of the Result: When you try to prove to someone that amachine won't work, it will.
Law of Biomechanics: The severity of the itch is inverselyproportional to the reach.
Theatre Rule: At any event, the people whose seats are furthestfrom the aisle arrive last.
Law of Coffee: As soon as you sit down to a cup of hot coffee,someone will ask you to do something which will last until the coffee iscold.
Murphy's Law of Lockers: If there are only two people in a lockerroom, they will have adjacent lockers.
Law of Dirty Rugs/Carpets: The chances of an open-faced jellysandwich landing face down on a floor covering are directly correlated tothe newness and cost of the carpet/rug.
Law of Location: No matter where you go, there you are.
Law of Logical Argument: Anything is possible if you don't knowwhat you are talking about.
Brown's Law: If the shoe fits, it's ugly.
Oliver's Law: A closed mouth gathers no feet.
Wilson's Law: As soon as you find a product that you really like,they will stop making it.

#joke
Joke | Old joke from joke of the day archives - Check out other old jokes Thursday, 21 May 2015

Ole says, "And Lena, did you know there are more than 2 million caribou living in Alaska?"

"No," says Lena, wondering how this conversation came about in the middle of their sex play.

"How did you get so smart?"

Ole says, "Remember last night when we ran out of toilet paper and had to use the pages out of magazines?"

"Well, you still have page 63 of National Geographic stuck to your ass."

Ron, an elderly man in Australia, had owned a large farm for several years. He had a large pond at the back.
It was properly shaped for swimming, so he fixed it up nice with picnic tables, horseshoe courts, and some orange and lime trees.

One evening the old farmer decided to go down to the pond, as he hadn't been there for a while, and look it over.
He grabbed a five-gallon bucket to bring back some fruit. As he neared the pond, he heard voices shouting and laughing with glee.

As he came closer, he saw it was a bunch of young women skinny-dipping in his pond. He made the women aware of his presence, and they all went to the deep end.
One of the women shouted to him, "We're not coming out until you leave!"

Ron frowned, "I didn't come down here to watch you ladies swim naked or make you get out of the pond naked."
Holding the bucket up Ron said, "I'm here to feed the alligator."

Daniel Tosh: Only One Tattoo

I think if youre gonna get a tattoo, just get one: the words, Im dumb. Thats it. That way in 10 years, when you go, Why did I get this?, you can be like, Oh, Im dumb!
#joke #short
Joke | Old joke from joke of the day archives - Check out other old jokes Wednesday, 29 September 2010

Jimmy Dore: Growing Up in a Big Family

They go, Well, you learn a lot about life growing up in a big family, dont you? Yeah, I learned that Im replaceable.
#joke #short
Joke | Old joke from joke of the day archives - Check out other old jokes Thursday, 29 September 2011